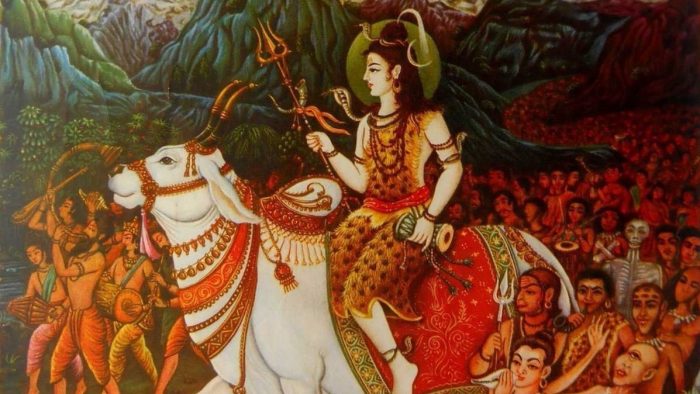 The Kumarasambhavam epic opens with a magnificent hyperbole describing the great Himalayan mountains:

The Himalayas is like a great measuring scale used to measure the earth. The narrative then moves to describe Himalaya’s daughter Parvati.

The Himalayas were both sanctified as well as decorated by his daughter Parvati. She was to him like a bright flame is to a lamp; like the river Ganges is to the paths of the heavens and like a refined language is to the intellect.

By being the measure of every kind of beauty imaginable and the propriety of it, Parvati was like the result of the creator’s desire to see all the beauty of the universe in one place.

And then, when the gods approach Lord Brahma to help them overcome the demon Tarakasura, Lord Indra implores his preceptor Brihaspati to communicate the request.

And then, like the multitude of lotuses swayed by a pleasant breeze blowing over the lake, Lord Indra’s thousand eyes were seen imploring his preceptor to narrate the perilous situation of the gods.

The great white horse of Indra, ucchaiHshravas, which was like the personification of Indra’s fame, was taken away from him by Tarakasura.

We seek a protector, under whose leadership Indra shall win back his power and prosperity as if he would be releasing them from enemy captivity. And then, the gods employ the services of the Kama, the god of love, to try and create love between Lord Shiva and Parvati. He is supported by his friend Vasanta, the spring season. 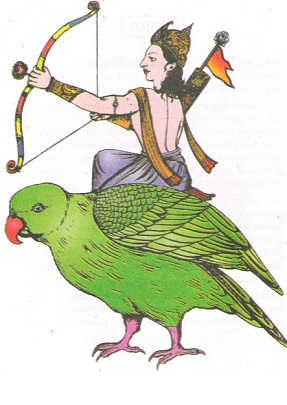 The arrows of Kama were made from the budding leaves of the mango tree. The bees lined up on them appeared like the letters making up the name of the Kama himself.[Here, Kalidasa has utilized the historical fact of warriors inscribing their names on their arrows to such dramatic and beautiful effects.]

As he approaches Lord Shiva, Kama develops cold feet and loses all confidence. At that time, Parvati appears on the scene.

Parvati appeared like a moving creeper in full bloom. Her beauty emboldens the Kama:

The Kama, after ensuring that everything is right with his bow, waited for the right moment to strike his floral arrow at Shiva. He was like an insect unknowingly rushing towards a burning flame. The Kama eventually strikes his arrow at Shiva and even the great lord is stirred for a moment:

Shiva was stirred for a moment. It was like the sea which experiences high tide during moon-rise. But Lord Shiva quickly regains composure and burns the Kama to ashes.

Thus, having swiftly crushed the Kama, the menace to his penance, like lightning striking down a tree, Lord Shiva decided to shun the presence of women altogether and disappeared with his companions. [This simile is completely apt because when lightning strikes a tree, it gets burnt down to ashes just like the Kama was.]  Rati, the wife of Kama, weeps over his ashes:

She wailed for her husband lying on the ground, her clothes all soiled and her hair disheveled. It appeared as if she was moving that entire place to grief.

Gone are you and you won’t be returning; you are like a lamp put out by the wind. I am like the wick of that lamp which can only fume in despair.

Fate has half-killed me by snatching the Kama away from me. I am like that creeper which has been pulled down because the tree I was clinging on to was pulled down by an elephant.

Thus despairing, Rati decides to end her own life. Then, a voice from the heavens assures her that the Kama will return back to life.

That voice shook her up like the first rains which shake up the anxious fishes in the near-empty ponds.

In the meanwhile, Parvati decides to do penance to earn the love of Lord Shiva. Her mother tries to prevent her. A beautiful selection from this situation falls into the category dRuShTAnta or analogy.

All the gods that you can think of residing in our home. Why do you need to do penance? The hard ways of penance are not made for a delicate darling like you. A flower can only tolerate the weight of a bee; not of a bird.

Parvati nevertheless decides to go ahead with penance. And eventually, Lord Shiva is pleased with her penance and comes to meet her in the guise of a young Brahmachari. He tests the love of Parvati and when she rings true in every test, he eventually presents himself in his true form and holds her by her hand.

Seeing him in such an unexpected manner, Parvati could neither stay put nor move. She was like a river that has encountered a mountain in its path and is struggling to find a way past it.

Then, Parvati sends forth her friend to inform Lord Shiva about approaching her father to seek her hand in marriage:

Thus, by sending the message and staying silent herself, Parvati appeared like a mango tree which sends forth its message of love to the spring season through the cuckoo.

Lord Shiva on his part, requests the seven great sages, (the Saptarshis), to approach the mountain-king Himavantaon his behalf. They, along with Arundhati, set forth on their mission.

Arundhati, the devoted wife of the great sage Vasishta, shone in the midst of the seven sages as if she was the living fruit of their penances. The great Himalaya is humbled by their arrival.

By your grace, I feel like a dullard suddenly becoming knowledgeable or like iron turning into gold or like a mere mortal raised straight up to the heavens. The Saptarshis likewise compliment the mountain-king:

Your thoughts are as tall as your peaks. And finally, they request him to marry his daughter to Lord Shiva:

Just like a word and its meaning are inseparably coupled with each other, so shall you couple Lord Shiva to your daughter Parvati. 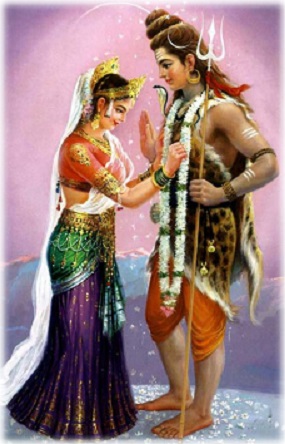 Eventually, Lord Shiva and Parvati got married in a grand ceremony at the great Himalayas. And the epic concludes with Parvati becoming pregnant.

Note: These are just some choice samples from Kumarasambhavam, perhaps the best work expounding what’s known as Shiva Tattva—in the process, Kalidasa unravels Shiva to us mortals.

Indeed, there are a host of beautiful similes in Kalidasa’s other works as well. The interested reader can enjoy them all by reading the original or a faithful translation.