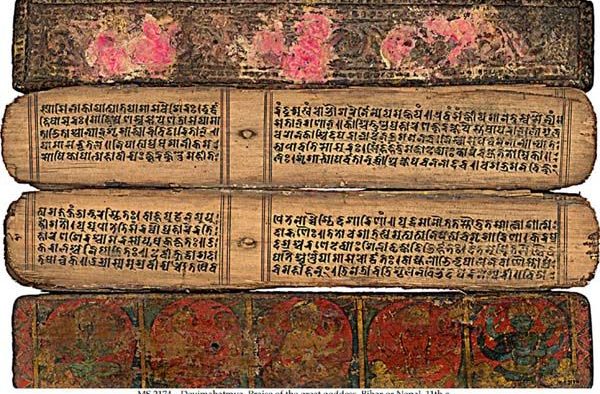 The world of Sanskrit literature, especially that which is connected with the Vedas, Smṛtis, Itihāsas and Purāṇas, is an ocean of information and knowledge. Unlike literature connected with the material world, śāstra-sammata-sāhitya (literature that is in harmony with śāstra) needs careful study and analysis if one were keen on understanding the true purport of the works.

In order to gain such an understanding, the first requirement of a pursuer is that the individual must be a firm believer in the Vedic (and śāstra) paramparā. The second requirement is that the individual must have basic grounding in the wider bouquet of śāstra works. For e.g. if one were to understand the Mahābhārata reasonably well, a decent study of the Bhāgavatapurāṇa, Harivaṁśa and the Padmapurāṇa is a must. So one delving into śāstra –sāhitya must be able to connect multiple sources of information.

Another important requirement in the pursuit of true knowledge is to have ‘bhāṣā viveka’ or fine grained knowledge of linguistics. The great ṛṣis and munis who composed our śāstra granthas, the fantastic poets who wrote our kāvyas, and other excellent composers of literature have all used various instruments of bhāṣa in producing their precious works. Without a good understanding of these tools, and without the ability to apply these tools to the large body of information available in the works, it will never be easy to obtain true understanding of any of these compositions.

Out of the six limbs of the Vedas, known as the Vedāṅgas, five have a strong connection with language. These are also fairly well known although the number of experts in these Vedāṅgas is dwindling. Śikṣā is connected with the art of proper pronunciation. Chandas is primarily concerned with prosody and poetic meters. Vyākaraṇa deals with the adherence of the work from the point of view of grammar while Nirukta helps us with the root and meaning of words. Kalpa aids the seeker with obtaining the right purpose of a work from a ritual point of view.

Outside of these five instruments, the rich world of Sanskrit literature provides numerous other tools to understand and interpret śāstra granthas correctly. There are many works known as ‘lakṣaṇa- granthas’ and ‘nirṇaya- granthas’ that help us understand finer details of literature. One famous lakṣaṇa- grantha has been composed by Vedavyāsa himself, although obtaining the same has become a challenge these days. Similarly numerous nirṇaya- granthas existed in the past which are dwindling in number now.

In the Mahābhārata- tātparya- nirṇaya (MBTN) grantha, Madhvācārya has provided some very vital details about this topic. The MBTN contains the Rāmāyaṇa in nine chapters and the story of the Mahābhārata in twenty-three chapters. At the end of the narration of the Rāmāyaṇa, Madhvācārya explains the entire process used by him to obtain correct sources and references for his work, and how he put the whole body of literature together. Detailing the amount of research and analysis he had performed, he declares that the work (MBTN) as a result of a lot of hard work; and therefore the conclusions drawn by him, on many tricky and difficult to grasp topics in the Rāmāyaṇa and Mahābhārata, must never be doubted.

‘In this way, by referring to all the purāṇas, Pāñcarātra texts, Bhārata, vedas, Mahārāmāyaṇa, by the use of logic and reasoning, and by the grace of Viṣṇu, I have narrated the story in the most appropriate way, by removing all conflicts seen in the (different) purāṇas. This work has not been narrated by referencing just one work. Therefore one must not suspect the work of any conflicting narratives.”

At this point, Madhvācārya elaborates on how our śāstra is sometimes deliberately written in a cryptic way to ensure only the right (qualified) people understand the true purport. Our ṛṣis and kavis made use of several techniques to insert this element of complexity into the works.

Based on Madhvācārya’s MBTN and the commentary on this by Vādirāja (in his work titled bhāva-prakāśikā-ṭīkā), let us look at three such instruments.

Every śāstra grantha can be read and understood in three ways:

However, when interpreted from a ‘darśana bhāṣā’ point of view, the underlying message here is that the blessings of Śiva are very important to obtain firmness of one’s manas which is most required to pursue any tapas. Kṛṣṇa guides ordinary people like us in this direction by undertaking such a tapas himself. In this style of interpretation it is critical to analyze the stories prior to, and post, the actual incident being looked at. Only then the true purport comes to light. Thus darśana bhāṣā requires a deeper analysis and guidance from knowledgeable people who can understand the philosophical meaning of a grantha.

If this line is interpreted using the samādhi bhāṣā, it would seem like a random mumbling of words such as river, water, keśava, woman, flag, and so on. However, using the guhya bhāṣā style of interpretation the śloka reveals itself as

Nagārisūnuḥ – son of Indra, the enemy of the mountains

The real meaning of this statement is, therefore “O Bhīṣma! Arjuna, the son of Indra, who has the flag of Hanumān (is here).”

Thus, one must be conversant with all three modes of interpretation in order to derive the correct meaning of any literature.

It is possible to interpret a composition based on the mode, or style, of its composition. For example if an author has used very soft words in describing an interaction, then the story leads us to imagining a very peaceful and diplomatic conversation between the people involved. On the other hand, if the choice of words are very rustic or harsh, a violent interaction can be visualized.

In the lakṣaṇa- granthas, Vedavyāsa has described hundred such ‘rītis’ or techniques. However, Vādirāja while commenting on the MBTN has explained six important modes from amongst the hundred. Let us have a look at these six.

On these lines, there are numerous other differences in style of composition. Only an expert will be able to decipher the reason behind the choice of a particular usage, and interpret the text correctly.

This concept is used to analyze differences in narration of incidents. When dealing with the same or similar topic, different shastra granthas may lay out the same incident in different ways. Using the concepts of bheda such differences have to be harmonized without attributing defect or malice to the authors. Only then can consistency be seen across all the narrations.

The knowledge of bheda is especially important in interpreting popular literature that is based out of Vedic or Puranic incidents. For example, the poems of Kalidāsa, Bhavabhūti, and others, which are primarily based on the Rāmāyaṇa, Mahābhārata, and other śāstra granthas. Without a firm grounding in the entire shastra, the real purport of any description in the literature can never be achieved accurately.

Let us look at seven key styles of bheda narration.

1. Vyatyāsa is a type of bheda in which there is replacement with respect to time or persons, with reference to incidences. The two are called kāla-vyatyāsa and puruṣa-vyatyāsa

In the Mahābhārata, the story of Kṛṣṇa leaving for Dvārakā in order to kill Śālva is narrated first, and then comes the story of Bhīma mocking Duryodhana in the Palace of Magic. The actual incidents take place in the reverse order. This is an example of kāla–vyatyāsa. Here, the narration does indicate the time of occurrence. In other words, the narration actually suggests the order in which the incidents took place.

In a few purāṇas, it is mentioned that the Kauravas were killed by Dhanañjaya. Now it is well known that the name Dhanañjaya corresponds to Arjuna. So this narration may seem as a mistake. However, it is well known to everyone, including the author of such Puranas, that it was Bhīma who killed the Kauravas. Therefore such a narration is treated as puruṣa–vyatyāsa. The intention here is to highlight the closeness of the bond between Bhīma and Arjuna, and how the war was a joint effort between them.

2. Prātilomya is a style of narration in which the chronology of events is not explicitly specified but the narration is reversed when compared with actual occurrence. E.g. in the Mahābhārata the uttara go-grahana incident is described first and only then the dakṣiṇa go-grahana is narrated. However, the two events occurred in the reverse order.

Note the difference between this style and the kāla–vyatyāsa style. In the latter, the narration actually insists the order in which events took place whereas in the former the two are just described one after the other without any insistence on their actual timings.

3. Gomūtrī is a technique used to interject a smaller story in the middle of another story. It is so named because of the trajectory taken by the discharged gomūtra of a cow in motion. In the midst of a main story, the narration shifts to a totally unrelated incident and returns to the main story after a while. E.g. In the tenth skandha of the Bhāgavatapurāṇa, while narrating the great pastimes of Kṛṣṇa, a sudden narration of the discussion between the Trimūrti (Brahmā, Viṣṇu, and Śiva) is mentioned. Subsequently, the narration reverts to describing the līlās of Kṛṣṇa.

4. Praghāsa is another variety of narration. In this style, the author assumes that the reader shall consult other obviously relevant works and therefore skips narrating some incidents. E.g., In the Harivaṁśa the story of Kṛṣṇa’s yātrā to Kailāsa is described in great detail. However, the same is left out in the tenth skandha of the Bhāgavatapurāṇa. The technique used in the Bhāgavatapurāṇa is praghāsa, and the reader is assumed to have read the Harivaṁśa.

5. Ukṣaṇa is a style of narration in which a story is explained in extreme detail, just like the sprinkling of gomaya in front of the house. The story of Kṛṣṇa reaching Gokula from the prison in Mathurā is a good example of this style of narration.

7. Sādhu is the approach for narration when the focus is on one person only. This is especially used in certain ślokas praising devatā The focus of the narration is extremely clear. An example is the ṛc from the Ṛgveda that says ‘विष्णोर्नुकं वीर्याणि प्रवोचं यः पार्थिवानि विममे रजांसि’ (Ṛgveda I.154.1 ab). The above mantra is an unequivocal eulogy of Viṣṇu, with no room for any other interpretation. Hence it is sādhu.

The process of analyzing and interpreting the sacred works of śāstra and Sanskrit literature is multi-layered. A thorough knowledge of the wider set of granthas, along with the know-how of the various instruments of interpretation is very essential. Bhāṣā, rīti, and bheda are some of the useful tools in this journey. One cannot interpret or teach śāstra with just the knowledge of language. A lifelong indulgence in the practice of Sanātana Dharma is critical for success in any such endeavor.

(Given the ongoing controversy regarding the appointment of a non-Hindu scholar at SVDVS, BHU, we present a two-part article facilitating the understanding of different aspects of Sanskrit as both, a secular and a sacred language. The second part shall explain the points in this part with simple examples. )

Here’s the link to the second part: http://www.indictoday.com/long-reads/bha%e1%b9%a3a-viveka-comprehending-the-intricacies-of-interpreting-sanskrit-part-2/