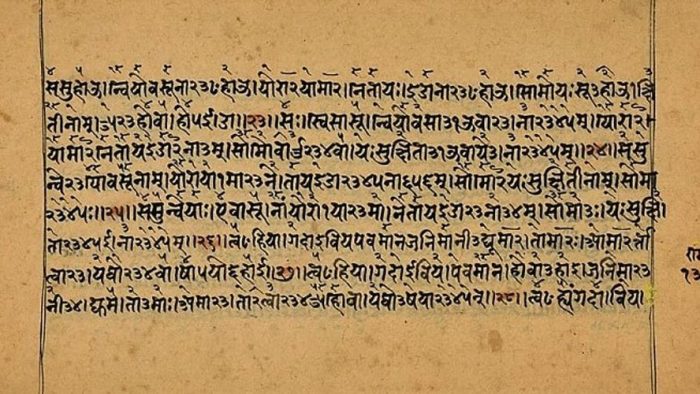 [ Salutation to that wise Vishnugupt, who was proficient and also prudently collated the nectar in form of Niti-shastra from the big ocean of Artha-shastra ] – Kamandakiya–Nitisara 1.6

Kautilya’s Arthashastra is the oldest available text and is also the epitome in the tradition of Arthashastra. This text is a guidebook for a king/ruler to acquire, govern, protect, sustain and make his kingdom/ruling territory prosperous. It is not only a guide for a ruler but also for officials and people associated with government/state craft/policy making etc. It is also useful for laymen as it covers civic guidelines too.

Since the Arthashastra is a shastra, before we read this magnificent work and other such texts, understanding its roots is essential. Without understanding roots of any shastra, one can never taste the nectar of it.

In this article, following points are covered –

As per Shantiparva of Mahabharata, in Kritayuga, people on the earth were living without the king but Dharma was still prevalent. Afterwards, under influence of delusion, greed, pleasure etc., anarchy started to engulf Dharma and people became directionless. Devas approached Brahmadeva to establish the order again. Brahmadeva then created a shastra of one lakh chapters covering three goals – Dharma, Artha and Kama to provide direction to the people. Mahabharata further stats Shankara was the first to take the portion of Artha and propagated it in 10,000 chapters. Later on Indra reduced it to 5,000 chapters for his use and Brihaspati further concise it in 3,000 chapters. Finally Ushana concise it in 1,000 chapters.

Shukraniti says, Brahma is the originator of Arthashastra while Shukra narrated Arthashastra to his disciples (Asuras).

Proponents of Arthashastra mentioned in these sources, gets appeared in other literature too. We will see this in detail.

Table given below gives the clear view of this. For better understanding, the tradition is trifurcated as below –

Pre Kautilya era tradition is listed in the table below.

During Kautilya era, we can find two available texts as below.

It is believed that Kautilya/Vishnugupt and Vishnusharma were not different but the same person. Arthashastra was written for the matured audience while Panchatantra was written for immature audience. Many people have a misconception that Panchatantra is a collection of animal stories for children which is not true. In the benedictory verses, Vishnusharma has categorized his work Panchatantra as “Naya-shastra” and equated it as the “Extract of Arthashastra”. In other place, he refers it as Niti-shastra too.

In Post Kautilya era, following texts are found. Some of them are digest and collection of earlier texts.

It is evident that the tradition of Arthashastra was continuous and prolific. Although Panchatantra uses Niti-shastra term, It is observed that the word Artha is replaced with Niti  in post Kautilya era. Over the centuries and ages, this tradition was not only protected but also passed down to generations keeping sanctity intact.

Term Artha is specifically used by Kautilya, Vatsyayana (Kamasutra) and Dharmasutra literature for Arthashastra but in other literary sources, we find different terms for Arthashastra.

Arthashastra is also referred as Naya-shastra (Panchatantra) and Niti-shastra (Panchatantra as well as Post Kautilya era tradition) where policies (Niti) employed by the king regarding governance is a focus point which can lead state/people towards prosperity. So, the shastra guiding the king is called Niti-shastra. Term Naya is also used in Kautilya’s Arthashastra and Bharavi’s Kiratarjuniyam as part of Danda-niti.

In Mahabharata, we also find another term Danda-niti as part of larger context of Arthashastra. Prime context of Danda-niti is to maintain law and order on the earth. Here the meaning of the word Danda is not stick/staff but punishment to maintain law and order in the society. Naturally, judicial administration is a focus points here. It is to be noted that the term Danda-niti is directly referred for Kautilya’s Arthashastra in the classical Sanskrit literature Dashakumarcharitam by Dandi. Kautilya himself has used term Danda-niti in his Arthashastra to acquire and maintain state subjects, make them prospers and distribute them wisely. In Mudrarakshasa play, Vishakhadatta has also used this term. Kamandaka in Nitisara has added control mechanism (dama) for a king in this process which gives Danda-niti one more dimension. Kamandaka has told the king himself is a Danda and his policy (Niti) leads the state/people into the fold of happiness. The same concept also gets repeated in Shukraniti. In Smriti literature also, term Danda-niti is found extensively in the same sense as observed in other literature. So, the shastra guiding the king is called Danda-niti.

In Chhandogya Upanishad, term Kshatra-Vidya is used to denote Arthashastra. In Pali literature, we find the term Khatta-vija which is nothing but the Pali form of Sanskrit word Kshatra-vidya. Here, clearly the focus point is an emperor ruling over a vast area.

So, as per the era and importance of various aspects of polity, name of Arthashastra gets changed. Probably, as a mark of respect to Kautilya, nobody in post Kautilya era used Arthashastra or Artha-niti etc. for his work.

Every shastra is praised and venerated in our civilization. Generally, this veneration highlights its utility. At times, it is placed with other knowledge systems too. Same way, Arthashastra is also venerated in many texts. Few cases are given below.

In Dharmasutra literature, knowledge of Arthashastra is considered at par with Dharmashastra for an appointment of the Purohita. Role of Purohita was to provide correct guidance to the king to implement Danda (Justice). Aapastamba Dharmasutra specifically says so.

In Gautama Dharmasutra, Arthashastra (In form of Upaveda) is considered as one of the knowledge systems to establish the good governance.

In Panchatantra, it is narrated that the king must acquire skill of Arthashastra before becoming a king. It further states the importance of Niti-shastra by saying – Whoever reads and studies this shastra, will remain undefeated even against Indra (King of Devas).

Manusmriti, has advised the king to learn skill of Danda-niti to establish good governance in his territory.

The same advice for the king is also found in Yajnavalkya-smriti 1.311. Just like Apastamba Dharmasutra, here also, knowledge of Danda-niti is required for appointment of the Purohita.

In Nitisara, Kamandaka states : If a king follows this shastra and governs the people as per this Danda-niti, prosperity naturally goes to the king just like rivers meets to the ocean.

Shukraniti states : There are many shastra in this world but they focus on only one aspect of the life, while Niti-shastra covers all kinds of aspects and provides solution too. Niti-shastra is the mode through which all four goals of human life (Purushartha) can be achieved.

Shukraniti also states : Knowledge of Niti-shastra is important for people but essential for a king (because as a head of the state, he has to implement good governance).

Praise for Arthashastra is also found in Puranas. Purana literature (Vishnu Purana, Vayu Purana and Brahmanda Purana) have considered Arthashastra as an Upaveda along with Aayurveda, Dhanurveda and Gandharvaveda. Moreover, Vishnu Purana lists Arthashastra in the prominent 18 skills along with 4 Veda, 6 Vedanga, Mimamsa, Nyaya, Purana, Dharmashastra and 3 Upaveda.

Finally, let us also see how Kautilya has venerated Arthashastra. In the last chapter, he praises this shastra (Arthashastra) and says : This shastra brings and preserves Dharma, Artha and Kama while destroys evil force and loss.