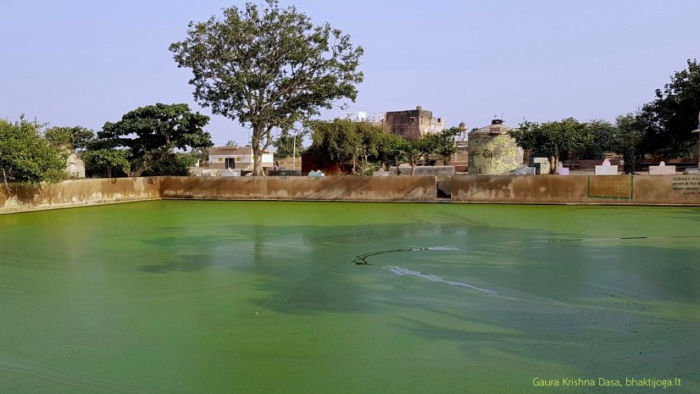 The antiquity of Sanatan Dharma still exists and exhales its presence in the many dedicated tīrthas – holy places of pilgrimage destinations. These Hindu tīrthas acknowledge the presence of the ancient Puranic past in the present times and its spiritual association with Dharma. The Sanatan tīrthas are generally situated on the banks of rivers, lakes and water bodies or on mountain tops. The Tīrtha-māhātmya in the Skanda Purana enumerates numerous tīrthas and shrines installed by Gods, Demigods, Rishis, human beings, animals and Rākṣasas. Apsaras also have been a reason behind some of the tīrthas illustrated in the Puranas. Apsarā Vargā and her other celestial mates got liberated from the curse of living in the Panch – tīrtha  for hundred years as crocodiles by Pandu Putra, Arjuna. These sacred bodies of water then came to be known as Nari Tīrtha.

Of the many tīrtha destinations described in the Skanda Purana, Apsarā Tilottamā has an important role in the creation of the Apsarā Kunda Tīrtha.

The creation of Apsarā Tilottamā was indeed one of the most beautiful achievements of the Divine architect, Vishwakarma. Consenting to Lord Brahma’s request, Vishwakarma created Tilottamā, an Apsarā par excellence in charm and grandeur, endowed with incomparable beauty. Vishwakarma, the Divine Architect took the minutest characteristics of beauty from all the three worlds and along with a handful of til seeds – sesame seeds created this beautiful Apsara. Her name was derived from the root word til and hence was  named – Tilottamā .

(She had been created with portions of every gem taken in minute measures, the Lord bestowed upon her the name of Tilottamā.)

After her creation by Vishwakarma, Apsarā Tilottamā was entrusted with the task of causing the end of the two dreadful Asura brothers -Sunda and Upasunda by captivating them in the honey trap of her magnificent beauty. Consenting to the task entrusted to her, the beautiful Apsarā Tilottamā walked around the celestial gathering of Brahma .As Apsarā Tilottamā progressed, walking around the Divine conglomeration, she had awestruck the Gods, DemiGods, Rishis, Gandharvas and other Celestials with her enchanting beauty. Such was her splendour that they all desired her companionship.

When Apsarā Tilottamā did the parikrama – circumambulation around Lord Shiva as a mark of respect, the infatuated Lord Shiva was unable to keep his eyes off her beauty. As Apsarā Tilottamā stepped forward to move around and passed away from Shiva’s vision, he had another face on that side of his body where she was passing by. When she was behind him, another face appeared to see her and when the damsel had walked across to the opposite side, Shiva’s fourth face appeared on the northern side of his body. Mahadev could not let go the stunning Apsarā Tilottamā out of his sight and had a face in each direction – east, west, north and south. Lord Shiva followed her in all the four directions to amass and behold the charm of the captivating Apsarā Tilottamā, in his eyes.

Lord Shiva gives a description to Devi Parvati regarding his four faces, that he created by the use of his Yogic powers to take pleasure in seeing Apsarā Tilottamā.

(In whatever direction that lady (Apsarā Tilottamā) of beautiful teeth turned, a new face of mine instantly appeared, I was so eager to see her. All those faces of mine became delightful to look at her. Thus, in consequence of the longing to behold her, I became four-faced, through Yogic puissance. Thus, I showed my high Yoga-power in becoming four-faced.)

Taking lead from the above story of Lord Shiva’s four faces for satisfying his longing towards the enchanting Apsarā Tilottamā, the Skanda Purana furthers the legend giving an insight into the creation of the Apsarā Kunda. As discussed in the Tīrtha-māhātmya, while Shiva observed Tilottamā with four faces, Devi Parvati remained ignorant of her consort’s desire for the Apsara. Lord Shiva did the entire act in the presence of Devi Parvati without moving his neck but by creating faces in all directions. On seeing the unnatural growth of four faces, Nārada a witness to the entire episode, approaches Devi Pārvatī and scoffs her about Lord Shiva’s philandering. He tells her about the four faces that Lord Shiva had developed for the purpose of seeing the alluring  Apsarā Tilottamā. Nārada cautions Devi Parvati regarding Lord Shiva’s distraction from her and his attraction towards Apsarā Tilottamā.

After listening to Nārada’s narration about her husband being unfaithful, Devi Parvati feels humiliated and is angered. She immediately covers all the four eyes of Lord Shiva with her palm. The moment she covers His eyes, there is darkness all around the universe. As a result, the entire creation is struck by Pralaya – destruction. After repetitive requests made by the Ganas and Nārada, Devi Parvati does not uncover Lord Shivas’s eyes and the Pralaya continues. Then Lord Shiva taking pity on His creation allows a  third eye to evolve on his forehead, thus making Him Tryaṃbaka- Three eyed. Soon the Pralaya is controlled and light makes way.

Thereafter the resentful Devi Parvati distances herself from Lord Shiva. She sees Tilottamā standing in front of her and rebukes her for alluring Lord Shiva. She chides Tilottamā for making Shiva deformed with four heads that he had created to immerse in her beauty. In utter rage Devi Parvati curses Apsarā Tilottamā to become ugly. At that very moment the cursed Apsarā Tilottamā’s nose was trampled, her hair withered and her teeth lengthened. Her eyes are sunken and her belly is seen protruded.

The Creation of Apsarā Kunda Tīrtha

With a transformed ugly body, the cursed Apsarā Tilottamā trembled. She urged Devi Parvati to have mercy on her. Tilottamā informs Parvati that she had been sent by Lord Brahmā for paying obeisance to Lord Shiva and not to charm him. She urges Devi Parvati to excuse her and spare her from blaming her for Shiva’s deformation and deceit.

On hearing Apsarā Tilottamā’s heartbreaking words, Devi Pārvatī regrets her severe action. To free her from the curse, Devi Pārvatī  takes Apsarā Tilottamā to Earth to a Tīrtha created by her for holy ablution on the third lunar day in the bright half of the month on Māgha. Devi Parvati ascertains that the water of the Tīrtha was clean and free of impurities and had the powers of bestowing beauty. She further reveals that a woman who would get up early in the morning before sunrise and take a dip in the holy tirtha would certainly become beautiful.

Seeing herself in the old charming self Apsarā Tilottamā is extremely content and delighted. She thanked Devi Parvati for her generosity and seeks permission to allow her an exit from Prithvi Lok and go back to Brahma Lok. Devi Parvati asks Apsarā Tilottamā to make a wish that she would grant. Apsarā Tilottamā expresses her desire to have a Tīrtha dedicated to her, in the holy spot of Hāṭakeśvara. She insisted that every year, Devi Parvati should take a holy bath in that Tīrtha for the benefit of all women, bestowing them with beauty and conjugal felicity.

Devi Parvati willingly agrees to Apsarā Tilottamā’s aspiration and assures that she would take her ablution at the Tīrtha on the third day of the bright half of Chaitra – The month in spring season, at mid-day, for the sake of the benefit of all women. A woman who would take a dip in the tirtha on that day would be loved and liked by all on Earth. She further added that even a man who would take a bath there with great devotion would become handsome for seven births and also enjoy conjugal bliss.

The conception of Apsarās and their existence in the Hindu Puranas confirms them as celestial nymphs with magical affluence, celestial obligations and humanly traits. The Apsarās were created with Divine intent and given Divine goals.  These Apsarās have been illustrated with not much magnitude in Hindu scriptures, but their influence has been profound and path changing, adding fruitful intensity to the Puranas. The Hatakeshwar Apsarā Kunda confirms heavenly blessings of the Gods on the celestial Apsaras, who could captivate with their beauty and heal with their generosity. The celestial Apsarā Tilottamā remains immortalised forever in the terrain of mortals at the Apsarā Kunda – A Tīrtha dedicated to beauty and conjugal bliss.