Apsara Adrika And the Chronicler Of Mahabharata: Part XXI 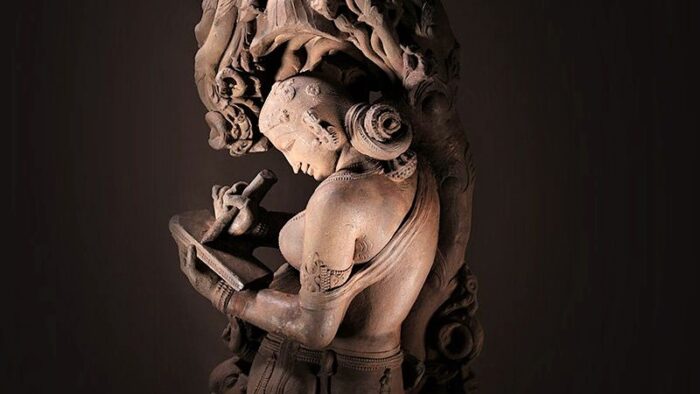 Every Apsara has her inherent importance and contribution in the development of religious Hindu manuscripts. The origin of The Mahabharata is associated with Apsara Adrika, an essential link in the initiation of the Epic. Apsara Adrika, a celestial nymph liberated herself from a curse and became instrumental in the birth of Matsyagandha.  As Matsyagandha grew she was blessed by the birth of a son. This son of Matsyagandha is accredited as the poetic architect of the great Hindu epic- The Mahabharata.

The birth of Matsyagandha from Apsara Adrika is a significant event that helps in adding foundation bricks to the edifice of The Mahabharata. As per the Puranas the Apsara would often descend to the Earth and soak in the rivers. They would spend much time in fun and frolic bathing and enjoying in these rivers.

Once Apsara Adrika was having an enjoyable time in the Yamuna river. She was full of childlike naughtiness, she swam in the waters of the Yamuna and splashed around. Around that time, a hermit visited the Yamuna to perform rituals after taking a dip in the water. He stood in knee deep water and prayed.  Apsara Adrika thought of having some fun with the Rishi. She went underneath the water surface and caught hold of his legs. She playfully pulled his legs and wouldn’t let him move. This distracted the praying Rishi. The Rishi was agitated and fumed with anger. He cursed Apsara Adrika to remain as a fish in the waters of the Yamuna. Apsara Adrika begged for forgiveness but as the curse had already been spelled, it couldn’t be removed. The Rishi modified the curse paving a way for her liberation. He assured that Apsara Adrika would remain a fish and would be liberated only after giving birth to two human children in her fish- like form. Apsara Adrika remained a fish in the river and waited for her moment of liberation.

The Birth of Matsyagandha

Suktimati, in forceful copulation with the Kolahala mountain, begot two twin children. The river showing her gratitude to King Uparichara Vasu gave both her children to him. Uparichara Vasu made River Suktimati’s son the general in charge of his forces and married her daughter, Girika.

Upon attaining puberty, Girika and Uparichara Vasu looked forward to consummating their marriage as man and wife.  Finally, the day of copulation arrived, but on that very day the Pitris- Forefathers of Uparichara Vasu asked him to slay deer and offer it for their Sraddha. King Uparichara Vasu accepting the command of the Pitris left his beautiful wife Girika and went into the forest to hunt for a deer.

The forest was embraced by the colours and fragrance of Vasanta Ritu –Spring. King Uparichara Vasu remained engrossed in the thoughts of his beautiful wife and continued the search for the deer. He looked forward to a union with his wife and was immersed in love and desire for her. He was restless and excited by the sweetness of spring and uncontrolled yearning for Girika. Uparichara Vasu’s seed was released under a fragrant and flowering Asoka tree. A hawk sat on the Asoka tree and looked at Uparichara Vasu’s activities. The King requested the hawk to take his seeds to his charming wife, Girika.

The hawk swiftly took the king’s parcel and navigated in air towards his wife. While on his path, the hawk came across another rival hawk who thought the parcel was a meaty prey. He chased the hawk for the parcel. The two fought with each other in the sky and in the course of their scrimmage, Uparichara Vasu’s seed fell into the waters of the Yamuna that was flowing below. In the river Yamuna dwelt Apsara   Adrika in her cursed Fish form. As soon as Uparichara Vasu’s seed fell into the water, Apsara Adrika rapidly approached it and swallowed it at once. After around nine months, Apsara Adrika in her fish form was caught by the fishermen. From the stomach of the fish, a male and a female child came out in human form. The fishermen were astonished seeing the two human new-borns. They immediately headed to King Uparichara Vasu and told him about the incident and showed him the infants that they had recovered from the fish’s belly. The male child amongst the two was taken by King Uparichara Vasu. He later became the virtuous King Matsya. The female child was let to reside with the head of the fishermen tribe Dashraj. She was named Matsyagandha- मत्स्यगंधा which meant ‘smelling like a fish’. Matsyagandha carried along with her the whiff of a fish.

Post the birth of Matsya and Matsyagandha, Apsara Adrika was liberated from the curse. She lost her fish-form and transformed into her original celestial form.

The Birth of Vyasa

The fish smelling daughter of Apsara Adrika was dark which also gave her the name Kaali– Dark one. She was extremely beautiful, attractive, virtuous and obedient. She often assisted her foster father Dasaraj by ferrying on the waters of the Yamuna.   Once while ferrying on the Yamuna, she was seen by the Maharshi Parasara. Awestruck by her beauty, Maharshi Parashar was brimming with desire. He approached her and expressed his longing to hold her close. Matsyagandha too succumbed to carnal urges and out of the copulation their son Vyasa was born. He is also considered the immortal form of Narayana.

Meaning- Thereafter, in the seventeenth incarnation of Shri Narayana, Vyasadeva appeared in the womb of Satyavati through Rishi Parasara. Vyasa is the one who divided the one huge Veda into several branches and sub-branches, seeing that the people in general were less intelligent.

The Beginning of Mahabharata

With her musky fragrance and beauty, she later attracted King Shantanu of Hastinapur and became his queen wife. Matsyagandha or Kasturigandha was also popular by the name Satyavati, the queen of Bharat Dynasty. Satyavati with King Shantanu became the mother of two sons- Vichitravirya and Chitrangada. Hastinapur prospered under Vichitravirya’s rule. Due to ill health both Vichitravirya and Chitrangada died an early and untimely death. Hastinapur was left without a successor. The throne of Hastinapur lay vacant, which was a matter of worry and concern. Satyavati confided to Bhishma regarding her secret son with Maharishi Parashar named Vyasa. Satyavati requested Vyasa for the heir of Hastinapur. Honouring his mother’s command Vyasa fathered Dhritarashtra and Pandu, the future kings of Hastinapur, along with Vidura the Prime Minister of the Kuru Dynasty.

In retrospect, Vyasa had laid the foundation for the battle of Kurukshetra. Vyasa Rishi contributed in narrating the epic of Mahabharata to Lord Ganesh. The descriptions of Vyasa for the Mahabharata were written by Lord Ganesh which started with the verse below-

Meaning – Om! After bowing with utmost dedication and devotion to Narayana and Nara, the most exalted male being, and also to the Goddess Saraswati, must the word Jaya or victory be uttered.

Apsara Adrika nurtured the seed of Uparichara Vasu and incidentally became the surrogate mother to Matsya and Matsyagandha. Matsyagandha gave birth to Vyasa the chronicler of Mahabharata. He also narrated all the Upanishads and the eighteen Puranas to Lord Ganesha who wrote them all. He fragmented the Veda into Rig Veda, Sama Veda, Yajur Veda and Atharva Veda. In the process Vyasa came to be known as Veda Vyasa. The twists and turns of the Puranas create a labyrinth of minor and major characters contributing to the unfolding of the plot. The birth of Matsyagandha liberated Apsara Adrika and paved the path for the creation of Mahabharat Apsara. Adrika’s contribution to the Mahabharata is not as trivial as it is for her that the epic of Mahabharata was conceived and written.