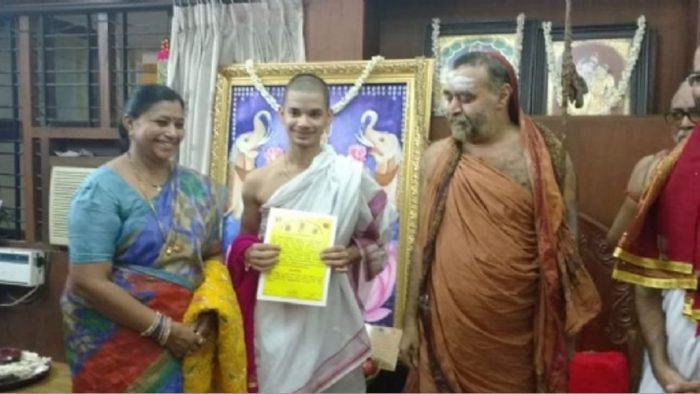 16-year-old Priyavrata of Goa passes ‘Mahapariksha’ at Tenali drawing praises from all across including the PM. Prime Minister Modi, tweeted to congratulate the young Vedic scholar.

Congratulations to Priyavrata for this feat. His achievement will serve as a source of inspiration for many! https://t.co/jIGFw7jwWI

The exam which takes 5 to 6 years to prepare and appear, the young lad did it in just 2 years becoming the cynosure of the entire country.  Since 2015, Indic Academy has been supporting the Tenali Exams, a unique institution that operates like an ‘open university’. It currently supports over 40 students in the study various Shastras. Similarly, Indic Academy has supported Priyavrata in his journey by way of scholarship grants.

The culture of Bharat is multidimensional with torchbearers emerging from time to time. Our Vedas and Shastras are the foundational texts and even to this day, there are hundreds of scholars who are studying and mastering them, thereby keeping the traditional knowledge alive. While many rues that our traditional knowledge systems, the Gurukulas, Guru-Shishya parampara is on the wane, there are many, who keep the flame of our ancient knowledge systems alive. One among them who gives hope for a bright future in Vedic and Shastra studies is the young 16-year-old Priyavrata Patil of Goa.

While many deem teenage to be the period of fun and frolic, Priyavrata has burnt the midnight oil and passed the extremely difficult ‘Tenali Exam’ in Shastras at a young age. The ‘Tenali Exam’ also called the Mahapariksha is conducted under the supervision of Kanchi Math. The examination is conducted twice a year by Shri Kanchi Veda Vedanta Shastra Sabha in Nyaya, Mimamsa, Vyakarana, Advaita, and Veda Bhashya. Priyavrata had taken the examination in all Vyakarana Maha Granthas. The exams consist of both written and oral tests.

The Mahapariksha at Tenali consists of 14 levels and those studying for the same attempt it after 5 to 6 years of efforts. However, Priyavrata has successfully passed the exam after mere 2 years of study. He cleared the exam on 6th September at Tenali. The wonder kid’s achievement was recognized and congratulated by none other than Prime Minister Narendra Modi. Replying to a tweet of Samskruta Bharati co-founder and Sanskrit Scholar Chamu Krishna Shastry, PM Modi wrote “Excellent! Congratulations to Priyavrata for this feat. His achievement will serve as a source of inspiration for many!” Priyavrata’s feat is indeed inspiring to all those parents and their wards who aim to safeguard our traditions and culture.

A native of Goa, Priyavrata was brought up by his parents Pandit Devadatta Patil and Smt. Aparna Patil in the Gurukula model at their home in Rewan village. He studied Veda and Nyaya from his father and Vyakarana Maha Granthas from his Guru Mohan Sharma. Pandit Devadatta Patil is also a highly accomplished scholar having won the ‘Badarayana Puraskar’ at a young age and was presented to him by former President APJ Abdul Kalam. He along with his wife runs a Gurukula modelled after the traditional Bharatiya schooling, in Rewan village in Goa. Students here are given education in Vedas and Shastras irrespective of region, caste and language. It was here that Priyavrata was raised.

Speaking to the media Priyavrat had said that he is extremely happy and inspired as the PM recognized his feat and congratulated him. He also said that he believes that, it is his duty, to preserve our ancient knowledge systems as his father told him. His mother Aparna Patil is proud of the appreciation her son has got from the PM. “We are happy and proud that this feat was recognized by the PM who has noticed the achievements of common people like us”, she says.

Passing the Mahapariksha is no mean task. Prominent and renowned scholars and powerhouses on various subjects test the knowledge of the students and the questioning goes on for several rounds and hours. Priyavrata answered all the questions satisfactorily and passed the exam. The director of the Kanchi Veda Vedanta Shastra Sabha informed his parents that in the history of the Sabha it was the first time in 100 to 150 years that a teenager has passed the exam successfully. The Kanchi matha in appreciation of his achievement has gifted him a one lakh rupees and this recognition by the Kanchi matha in itself is a great testimonial for his success.

Over the past 40 years, the ‘Tenali Exam’ has become an important institution in the field of studies of our Shastras. Many institutions like the Indic Academy support students who appear for the exam.

Smt. Aparna Patil and her son Priyavrata spoke to Prashanth Vaidyaraj, Bureau Chief of Organiser Weekly, on what inspired and motivates them and the road ahead. Below are the excerpts of the interview conducted over the phone.

In these days of so-called modern education, what inspired you to consider Gurukula and Vedic education for your son?

Smt. Aparna Patil (AP): His father is an accomplished Sanskrit scholar and I am also a PhD holder in Sanskrit. We as parents had decided that our child, whether girl or boy, would not undergo formal education but we would impart Vedic education to them. We gave a lot of thought about formal education and decided that if the child has to be happy he/she has to pursue our traditional education in Sanskrit. Moreover, Shashtras are our traditional asset and who else other than us would pursue and safeguard them. It is we who have to do it as we cannot expect foreigners to save it. With this in mind, we put Priyavrata into Sanskrit education.

He studied Vedas since his young age and continued. Rather than us asking him to pursue, he, himself, found his interest in Shastras. His Guru Mohan Sharma inspired him to study more and he did it diligently. He was so interested that he completed the syllabus of 6 years within 2 years.

How do you see his journey going forward?

AP: Our Gurukula in Goa has students from a young age to those in the mid-30s. We have both boys and girls in our Gurukula who are pursuing Vedic education. Priyavrat’s Guru Mohan Sharma who is from Ujjain has an MA and could have earned very well if he taught in a university. But he stayed with us at the Gurukula and said that it is his duty, to teach at the Gurukula which imparted him an education. Likewise only if the next generation takes forward the Gurukula it will survive and thrive.

Our Gurukula is like a large family and everyone converses in Sanskrit. There is no language barrier and no one ‘national language’. Priyavrat Guru is from MP and his guru is from Andhra. Students here come from different parts of the country, from Tamil Nadu to Gujarat. I am from Maharashtra and his father is from Goa. Our Gurukula is national integration personified. Sanskrit is the heritage of all and it is our duty, to preserve it. Just as Ramayana and Mahabharat do not belong to one group or state but the entire country, likewise Sanskrit belongs to all. Sanskrit is the main tool of national integrity. Hence he will continue to pursue his education in Sanskrit. I also think that one should not pursue education for earning but to gain knowledge and serve the country. He will continue to this.

He will continue in this path and continue to study the Shastras. Even after the Tenali exam, there are much bigger Sanskrit texts that are to be studied. He will study them and gain more knowledge. He will involve in further research and also teach at our Gurukula.

What kind of support he has received for his education from other people and institutions?

We have also received support from several organisations to run our trust which manages the Gurukula. For instance, Appasaheb Patwardhan Veda Shastra Vidyalaya of Pune has helped us. A Shankaracharya of a village in Karnataka, a Sanskrit Foundation and many others support us.

The society at large helps us both morally and by taking care of our students, especially girls. They are safeguarded by people when they want to commute between the place of residence and Gurukula. Our students are respected by everyone in the society and are monitored by them too. They are concerned as they know that the Gurukula is doing good work.

You have established and run a Gurukula that is doing great service to our tradition. What do you envision for the growth and protection of our traditional knowledge systems?

AP: I envision that our children study Vedas/Shastras along with modern subjects like Physics, Chemistry. A university which caters to such a method should emerge in India. Just like the universities of Nalanda, Takshashila, we need to have institutions that will amalgamate both forms of education and we may see amazing results. I wish our Gurukula becomes like that but even if it comes up anywhere in India we will be very happy. Am sure that society will also support any such initiatives.

What inspired you to study for the ‘Tenali Exams’ at such a young age?

Priyavrata (PV): My parents and Gurus inspired me and guided me which helped me throughout. I have been interested in Shastras at a young age. My father used always to say that we have to study our Vedas and Shastras to preserve the knowledge of our ancient Bharat. It was because of his inspiration and guidance from my Guru Mohan Shivnarayan Sharma I was able to study and clear the 14 level exams in 2 years.

How did you prepare for Mahapariksha? What was your routine?

PV: I used to study for 14-16 hours for the past many years. The day started at 5 AM and went on till 11 PM, breaking only ablutions, food and sandhyavandana. I spent the rest of the time studying for the Mahapariksha. My gurus and parents helped me a lot while preparing.

What do you want to do going forward?

PV: I will continue to study our Shastras and teach at the Gurukula just as my father. PM’s congratulatory Tweet has inspired me to study further. Everyone should strive to learn and preserve ancient Bharatiya knowledge.

(The interview was conducted by Shri Prashanth Vaidyaraj of Organiser Weekly)