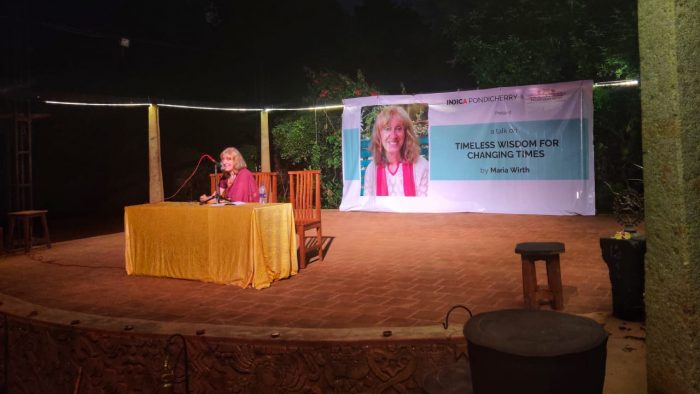 Indic Academy Puducherry Chapter witnessed a soft power start with Maria Wirth talking on the theme of ‘Timeless Wisdom in Changing Times’ with excerpts from her book ‘Thank You, India’ at Kalarigram. The event took place on 18th January, 2020 at Kalarigram, Tamil Nadu.

After a brief tour of Kalarigram, where she experienced the energy that reverberates in this space, thanks to the divine presence of Kalloorika Devi and Kalaripayattu training, she was ready to start her talk.

Diving straight into the topic, she extolled the brilliance of the Rishis of yore, who divined the mantras from the cosmic consciousness. These highly evolved minds, far ahead of their times presented the world with scientific concepts much before the western world laid claim to these discoveries, she said.

Maria’s journey to India started off as a stop-over on her way to Australia in 1979. Disillusioned with Christianity, as she experienced it in native Germany, she had resigned herself to becoming an atheist when she read the book on Gnana Yoga by Swami Vivekananda. Moved by the clarity of thought and simplicity of the text, she decided to stay on for a little longer.

She came in contact with Sri Anandamayi Ma and Devaraha Baba on her pilgrimage to the Ardha Kumbha Mela in Haridwar in April of 1980. So moved by her experience in India and her interaction with these ascetics, she stayed on to learn more about the rich culture and traditions in India, and gain greater insight into the teachings of the Vedanta.

She spoke of having spent her early years in the Christian tradition that taught that anyone not following that religion were doomed to go to hell. That has a profound negative impact o n her and when she came to India, her understanding of God and spirituality deepened learning about Advaita.

She bemoans the defensive and tentative nature of Hindus, and how they have been carried away by the shallow and transient nature of Western Culture. She wishes that every Indian learns Sanskrit, reads the Ramayana and Mahabharata, and is able to appreciate the beauty of the culture and traditions of this wonderful land. She realized how the admixture of religion and politics was vitiating the atmosphere and causing social upheaval; which was all the more reason that Hindus needed to be more vigilant, and not be cowed down by these devious tendencies.

She also inaugurated this year’s Yoddhayanam – the journey of a warrior, a seasonal Kalaripayattu performance staged at Kalarigram. She was fascinated by Kalaripayattu and how it transformed warriors into overcoming fear. We explained the philosophy of this ancient martial art and how it was not purely physical exercise, but led to better mind-body coordination, and as the student progressed in his practice, the practice turned into a Sadhana, and impacted him spiritually too. Maria believes that this is a tradition that needs to be preserved and spread far and wide, so many more people may benefit from it. 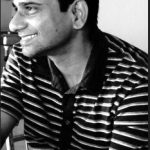 Founder-Director of a Knowledge Management Company based out of Chennai, India. Member of Kalarigram Trust and involved in setting up the Kalarigram Gurukulam - aRead more