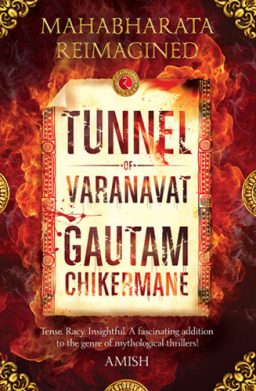 The Tunnel of Varanavat is a poem written in prose.

From the very first passage you are overwhelmed completely by the imagery inherent in each single sentence. For the first few pages I was mesmerized by the author?s capability to weave words into such beautiful strings so as to make me wonder if indeed it was a book that I was going through or a vision. Tunnel of Varnavat begins with the story of Badri, the chief-tunnel-guy for Hastinapur also known as the ?Surangraj? and takes the reader through the by lanes and forests of the Kuru Kingdom that once ruled the nation.

There have been many attempts in the past to redo the ancient epics like Mahabharat and Ramayan from different character?s perspectives and I applaud the authors who have done the same, but thankfully, this is not one of those renditions! The story weaves around the life of the tunnel maker who does end up performing an important role in the epic of Mahabharat but thankfully the story doesn?t delve into the epic any more than what is required. It is instead, a tale of the lesser known men and women who play small yet significant part in the lives of the better known characters from the epics.

The language gets a little repetitive at few places but more than anything, to me it shows how engrossed the author was in the story and how he was living it while writing down each sentence. Another thing that struck me was the description of a person?s conscience almost like a living entity with a mind of its own, something I have experienced myself but hardly ever have had the chance to read mentioned so clearly. The characters in the book are engaging and have their individual personalities that make you empathize with them and the decisions they make.

The connection between Badri and Veer is beautifully depicted and so is the filial bond between the Pandav brothers. One gets a rare insight into how they would have been in a setting that could only have put immense pressure on each of them and their mother Kunti who comes across as a headstrong person completely devoted to saving her children?s lives whatever the cost. Even the villain Purochan shows a side to his personality that would fill the hearts of many readers with sadness for this is the story of many in the world even today.

The Tunnel of Varnavat not only takes you into the tunnels of the Hastinapur kingdom, but also the tunnels of human psyche and make you realize that often things are not as simple as they appear, and there are many a shade of grey in between the good and the bad. The book is a valuable addition for those who seek to understand the characters of the past in a more holistic way and is a refreshing break from the glut of redone Mahabharat/Ramayan versions available in the mythology genre today.

Wishing for more such interesting books by the author and wishing him success.