The Battle for Rama: Case of the Temple at Ayodhya 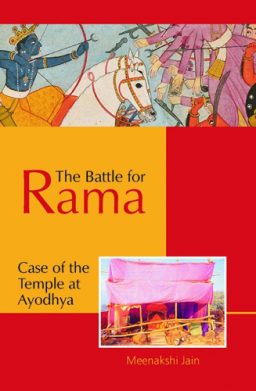 In her 2013 book, “Rama and Ayodhya“, Meenakshi Jain had presented perhaps the most accessible, authoritative, and comprehensive account of the  literary, sculptural, epigraphic, and historical evidence to support the antiquity and ubiquity of Rama across India, in addition to summarizing the findings of the Allahabad High Court’s verdict on the case.

Her 2017 book, “The Battle for Rama: Case of the Temple at Ayodhya“, builds upon “Rama and Ayodhya” with new information and evidence that has come to light in the last few years. While it is a short book, at 160 pages, it is nonetheless lavishly produced, with 61 illustrations and full-colour photographs printed on glossy paper.

While much has been made of the missing entries in Babur’s memoirs, that broke off on the 2nd of April, 1528, to resume on 18th September, Ms Jain tells us that it “bears recalling that Babur did not document every event in his life. He maintained silence, for instance, about taking help from the Safavid King, Shah Ismail, in his third attempt to capture Samarkand. According to the terms the Safavid monarch imposed, Babur, a Sunni, had to accept the trappings of the Shia creed. … There was not a word on this in the Babur-Nama (Asher 1992: 19)”

Babur was born in 1483 and died in 1530, four years after the First Battle of Panipat. This battle marked his defeat of Ibrahim Lodhi, and in many ways the start of the Mughal rule in parts of India. Babur marked this victory with a mosque in Panipat (Kabuli Bagh mosque – named after one of Babur’s wives).

The second mosque associated with Babur to have survived in India is the one in Sambhal – Shahi Jama Masjid – “constructed in 1526 by Babur’s general, Mir Hindu Beg.” The significance of the mosque is that “located atop a hill, it dominates the landscape for a considerable distance.” The choice of Sambhal for the mosque, notes Meenakshi Jain, is “noteworthy.”

“According to Hindu tradition that was known to the Mughals, the last incarnation of Vishnu would appear in Sambhal at the end of the era.”

The use of temple material in the mosque at Sambhal “is evident in the internal architecture of the building.” The place was said to be known as Hari Mandir before the Jami mosque was built in its place.

The third mosque used to be the Babri mosque in Ayodhya, built at the place worshipped by Hindus as Janamsthan (Lord Rama’s birthplace).

Meenakshi Jain notes that while Babur had based his claims to sovereignty on “grounds of his Timurid heritage and Turkishness,” this changed after his conquest of India – he would refer to Hindus as “kafirs,” and “termed the war against Rana Sangha as “jihad.”

“Soon after defeating Rana Sangha, he assumed the title of Ghazi, a soldier committed to the cause of Islam.”

This suggests that the choice of mosques built on the orders of Babur had either military or religious significance. Sambhal and Ayodhya were therefore not accidental, but deliberate choices for the mosques built there.