RSS – A View To The Inside 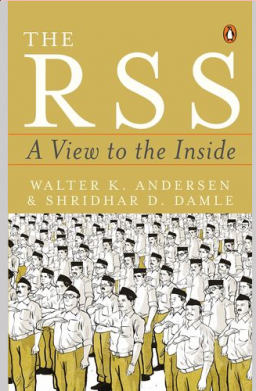 The Rashtriya Swayamsevak Sangh – RSS as is popularly known, is arguably the most vilified organization in independent India. It has suffered three bans since its inception in 1925. The Left-Nehruvian narrative that has occupied the center stage in India since independence, has projected RSS as a secretive, narrow, communal and an anti-minority organisation. Over the past seven decades this view has come to stay.

Despite this sustained campaign, the Sangh and it’s affiliates like the BJP, BMS, ABVP and many others have grown from strength to strength. Like it or not, it exerts tremendous influence on our society today. The BJP is in power in the majority of the states in India. Affiliates like the BMS and ABVP are today the largest organizations in their respective domains. There is thus a need for a clear understanding of the Sangh, the organization and it’s affiliates. Current literature on the Sangh conforms to the two extremes of the spectrum .These are either written by the intellectuals of the Nehruvian persuasion or by some insiders or people closely associated with the organization. Both necessarily suffer from bias and prejudice. There is no material that one can rely upon, that would promote a clear understanding of the RSS.

The RSS – A View To The Inside fills that gap admirably. The authors M/S Walter K. Anderson and Sridhar D. Damle have done enormous research, and have presented a dispassionate analysis of the Sangh. Their first Book on the subject “ The Brotherhood in Saffron- the Rashtriya Swayamsevak Singh and Hindu Revivalsim” is an equally informative one.

The authors have adopted the case study methodology to understand the approach of the Sangh of increasingly relying on the affiliates to convey its message, managing the links between itself and the affiliates, the success of staying together despite differing policy perspectives of the various affiliates and the evolution of its understanding of democracy, secularism and Hindutva in the light of its growing social inclusiveness.

The authors have explained the working of the RSS using several case studies. They include the Hindu-Muslim isssue, Economics, External Affairs as well as some of the traditional concerns of Ghar Wapsi, Cow protection, Ayodhya. Finally they describe the organisational approach on the Goa Rebellion and the Bihar elections.

The Relationship Between the RSS and it’s Affiliates

The authors provide an in-depth view into the RSS, it’s family of affiliates, it’s decision making process, the autonomy for the affiliates and the conflict resolution process.

“These affiliated organizations, despite their policy differences, have as a group demonstrated remarkable cohesiveness over the past seventy years, and the RSS has continued to serve as their ideological mentor without involving directly in their decision making process. Their organizational cohesion, we maintain is largely due to two factors: the Sangathan Mantri (Organizational secretary) system practiced by all affiliates and the autonomy granted to them by the parent body.”

Elaborating on the cohesion, they write ”Besides the ideology binding the office – bearers of the ‘family’ together, there are several structural elements that also serve to unite these often-disparate factions. All these affiliates , including those overseas, are represented at the RSS’s yearly ABPS (Akhil Bharathiya Prathinidhi Sabha), the central deliberative body that discusses major issues and passes resolutions on those considered most pressing. Beyond this, there are the samnvay samitis (co-ordination meetings) which bring representatives of the various affiliates……”

“Finally, and importantly, each of the affiliates operates autonomously, and the RSS usually asserts itself only when there is a power vacuum or to mediate differences within or among the affiliates “.

On Savarkar, they write ”Contrary to what some critics of Hindutva have argued, Savarkar actively worked to eliminate caste hierarchies within Indian society.” While discussing the issue of the RSS view on caste they quote Balasaheb Deoras (the Sarsanghachalak from 1973 to 1994) “If untouchability is not a sin, then there is no sin in the world.” They further quote from an interview of Mohan Bhagwat – “Special efforts were made to establish contact with different social groups and bring them to the RSS shakha activity; especially the social groups that were psychologically uncomfortable in calling themselves as Hindus due to discriminatory practices, were focused on” and Dr.Hedgewar – “We must behave with equal affection to all Hindu brothers, without any feeling of inferiority or superiority.” A description of RSS camps is provided, showing it’s egalitarian culture overshadowing caste hierarchies.

Dr. Hedgewar’s last speech made in 1940 in which he regarded the Hindu Rashtra as a miniature egalitarian family is also referred to.
On the issue of Hindutva, the authors say “the RSS leadership has never referred to Hinduism in the narrow religious sense.” They highlight the fact that the RSS looks at India as a Civilizational Nation State. “It (RSS) has never talked of making Hinduism a state religion.” They have clearly brought out the difference between the State and the Nation. This again runs contrary to the perception created by the mainstream media in India.

Other Activities Of The RSS

The Book also explains the enormous amount of work done by the RSS and the affiliates in the various fields like Labour, Agriculture, Students organizations, Dalits, Adivasis, Muslims and also the expansion of the organization with those sections. This breaks the myth that the RSS and its family is a Hindu upper-caste organization.

Through the various case studies the authors have ventured to validate their positions as stated earlier. While dealing with the case of Jammu and Kashmir, they state “Our central thesis here is that the RSS approach to Kashmir includes a balancing of strategic goals and tactics. The strategic goals (national integration and a definition of Hindutva that includes Muslims) are firm while the tactics to achieve them will vary depending on circumstances.”

The approach of the RSS is consensual when it comes to resolving disagreements within the Parivar, whether it is on Economic issues, Cow protection, Ghar Wapasi or the Rama Janma bhoomi issue.

On the approach of the RSS to the Ghar Wapasi programme, the authors say “Its (RSS) preferred approach to these differences is holding quiet, behind-the-scenes negotiations among leaders of the affected groups and creating compromises that are not incompatible with the basic objectives of the member organizations.”

Shortcomings Of The RSS

Anderson and Daamle are not wholly adulatory of the RSS. They have brought out the negatives as well. The authors have clearly indicated that the Organizations approach is determined by the Sarsangachalak and not by the organization as a whole. The approach of the RSS moved from solely character-building under Guruji Golwalkar to social and political activism under Balasaheb Deoras, to Rajendra Singh who set the tone for the current RSS-BJP relationship, to Sudarshanji who gave the thrust of Swadeshi and finally to Mohan Bhagwat who is a pragmatic mediator.

They assert that “He(Golwalkar) kept the organization tied to an elitist high-caste perception of Hindutva, especially with his focus on individual perfection through the ‘character building’ process.” The RSS would view this as blasphemous, given the fact that Shri Golwalkar is treated as a cult figure in the organization.

“A dilemma confronting the RSS is that despite all the effort………………comparatively few intellectual advocates of Hindutva have emerged in the top ranks of the country’s prestigious cultural and academic institutions. This scarcity has resulted in a shallow pool of people from which to draw…”

While assessing the Muslim Rashtriya Manch, which is an RSS sponsored organization (not recognised as an affiliate) they say ”The MRM has yet to demonstrate that it will make a considerable impact on India’s Muslim community, or even that it has significant influence within the RSS.”

The authors have done have done a fairly objective analysis of the RSS, covering not only the popularly known ideological aspects and political work of the parivar but also their lesser known social activities. The 121 pages of notes shows the extent of authentication that they have provided to whatever they have written.

The presentation is lucid and the print is good. However, since the authors validate their propositions in every case that they have taken up, there is a certain amount of repetition in the book. This is understandable though.

On the whole, this is a valuable book for anyone interested in Indian polity and politics.