Rajneeti – A Biography of Rajnath Singh 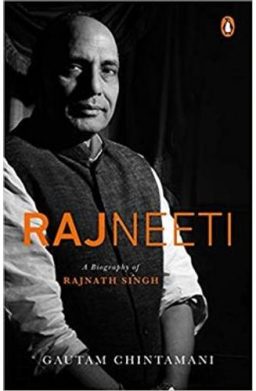 Contemporary history is a rare genre in Indian literature. When we think about history, we think about textbooks, which basically chronicle everything till 1947 with a passing mention of 1950 and then stop abruptly. It is as if we don’t need to know how India, as a post-Independence nation has evolved and which events or people have defined this evolution.

So, when a book like Rajneeti comes along, it’s a wonderful opportunity for the readers to go back and revisit events in their own lifetime, which they never read about in a structured way or have long forgotten despite witnessing these events, first hand. Gautam Chintamani fills a great void writing about veteran Bharatiya Janata Party (BJP) leader Rajnath Singh, in the process, shedding light on five decades of politics in Uttar Pradesh (UP) and India.

Rajnath Singh is the kind of grassroots politician who theoretically can be in any party, but more often than not are found in the BJP. A physics student, teacher and a Rashtriya Swayamsevak Sangh (RSS) Swayamsevak, Rajanth Singh is India’s Defence Minister. He has also been India’s Home Minister, UP Chief Minister, a minister in the first full-term BJP government led by Atal Bihari Vajpayee, two-time BJP President and the President of the party’s youth wing.

This kind of political rise – not backed by a family name or family history – is possible, not routine in India. For every story of success, there are many unwritten and untold stories of failure too. In this sense, Chintamani does a great job of not just chronicling the rise of Rajnath Singh but also explaining the reasons behind this rise. Rajneeti also covers the rise of the BJP itself, its growth in North India and what Rajnath Singh did to carve out a distinct political path for himself in this journey.

Two of the highlights of the initial years of Indian ‘right’s’ political evolution are covered early on in the book.

Firstly, Chintamani explains the role of Syama Prasad Mukherjee in the first Indian government headed by Pandit Nehru. The contributions made by Mukherjee in the area of industrial development as well as his thinking on Kashmir is well documented. These are interesting factoids for the readers, as they were influences on Rajnath Singh himself, in his early life.

Secondly, the evolution of Jan Sangh with contrasting views of Balraj Madhok and Deen Dayal Upadhyay are enlightening as well. Not a lot has been written about Upadhyay until the recent years and even lesser about Madhok. Chintamani brings out good information on their views on how the opposition to Congress should have shaped. It is well known that Madhok – the hard-line faction within the Jan Sangh – eventually lost his influence with the emergence of Upadhyay and later Atal Bihari Vajpayee. These internal contradictions in the Jan Sangh played out between 1967 and 1971 prominently. Singh was then part of the RSS’ youth wing Akhil Bharatiya Vidyarthi Parishad (ABVP) – his formative years in active politics.

Chintamani describes in details the ordeals of Rajnath Singh during the notorious Emergency. It is not very well known that Singh spent several months in Mirzapur and Naini jails during this time, including some time in solitary confinement. This was the time his mother passed away – he was not allowed to visit his sick mother and performed her last rites in captivity in Naini. These personal – political details of Singh’s life have not been in public domain very prominently.

The story of Rajnath Singh’s first election is quite fascinating as well. Singh withdrew his candidature in the 1977 Lok Sabha election in favour of the Janata alliance candidate, although his name remained on the ballot due to technical reasons. However, he worked for the consensus candidate, letting go of his personal ambition. Facing this situation would come handy for him during his term as the UP CM and then later as the BJP President.

The period between 1980 and 2000 is when Singh rose in political stature, eventually in the national limelight. Chintamani does a good job of describing the context of his rise against the backdrop of Indira Gandhi’s and Rajiv Gandhi’s PM terms and later the rise of VP Singh. All three leaders took decisions in the 1980s which directly impacted the UP politics. The state gradually shifted from being Congress’ ideological powerhouse to a politics where religious and caste battle lines were drawn due to the decisions made in Delhi. The Ram Mandir agitation in the late 1980s and early 1990s is what signalled the rise of the BJP in the state, and enhanced role for Singh in the BJP.

Rajnath Singh took over as the UP CM for two years in 2000. Chintamani has researched these two years in meticulous details. The political events which led to Singh being appointed the CM as well as his decisions – several seemingly trivial, but with great fallout on the state’s politics – have been brought out very succinctly. The chapter on Singh’s ‘Chief Ministerial Years’ is also a good study on how complex and complicated India’s politics is, in general. In an easy to read way, Chintamani brings out the vicissitudes of a CM’s job.

Rajnath Singh’s stints as the BJP President first from 2005 to 2009 and then 2013 to 2014 were also very eventful. In his first stint, he was entrusted the task of regrouping a shell-shocked BJP, still coming to the terms with the 2004 Lok Sabha election defeat. In his second term, he oversaw a generational change in the party, as PM Narendra Modi got appointed as the chief of party’s campaign committee and the prime ministerial candidate for the 2014 election. Neither phase was easy. Chintamani describes in lucid details now Singh managed the tough task of convincing the party stalwarts and PM aspirants.

The post-2014 work of Singh is easier to recall. His stint as the Home Minister saw scaling down of terror attacks in India outside the state of Jammu & Kashmir. His ministry also continued to attack the Naxal threat purposefully. Though Singh has often been mocked on social media for his ‘kadi ninda’ remarks, Chintamani explains the difficulties that a central minister faces in keeping the country secure.

Rajneeti is an easy read, which tells Rajnath Singh’s story factually and without personal glorification. Chintamani is a great storyteller – as those familiar with his work in the entertainment industry will know. He seamlessly transfers his storytelling skills to politics, without pontificating or making the book hagiographical.

For anyone interested in Indian politics, Rajneeti is a great read – highly recommended. Published by Penguin Random House, the hardbound edition has 330 pages, including references and indices.

You can order a copy here.

Aashish Chandorkar writes on public policy, politics, and current affairs. He is based in Pune.