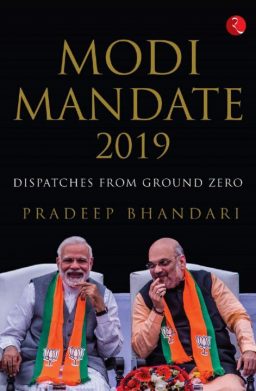 Indian elections are a combination of festival-like celebration and spectator sports, full of stories, events, opinions, and statistical analysis. The 2019 Lok Sabha election was no less – it was the first time a government got re-elected with an absolute single-party majority since 1984.

The run-up to the election was full of ups and downs. Most analysts thought that the Narendra Modi led Bharatiya Janata Party (BJP) will not come back to power in their initial analysis. But after the Pulwama terror attack and the Balakot airstrikes, the national mood was very different.

One of the people who accurately captured that national mood was Pradeep Bhandari, the author of Modi Mandate 2019 – Dispatches From Ground Zero. Pradeep is the founder of the psephology and analysis firm Jan Ki Baat. As part of his mandate to track elections and predict them, he toured the country extensively in the run-up. His book is a summary of these travels and his observations.

Pradeep has divided his book by states and regions, aggregating his observations based on local trends. The book captures his interactions with local voters in key constituencies of each state or region.

The book is written in a simple and fluid manner, not being judgmental and not garnishing the ground dispatches with personal views. Pradeep has synthesized his observations in a lucid manner, bringing forth key conclusions as he noted. There is very little editorializing of public opinion, which makes the book an honest and straightforward read.

In-seat specific analysis, Pradeep has also indicated how he arrived at his own conclusions when making predictions. He talks about Varanasi where PM Modi contented himself for a second time and won comfortably. In his Varanasi discussions, it came out very clearly that Brand Modi had no competition, nationally and obviously in his constituency. People knew they were going to elect the Prime Minister-designate and had no qualms about making it loud and clear.

Similarly in Amethi, where the opposition leader Rahul Gandhi lost his election to Smriti Irani, Bhandari talks about how he picked up specific signs which showed that it was going to be a tough election for the Congress leader. Although the general prediction still was that Gandhi will win the seat, the book does highlight how the people were looking for a change.

This also contrasts with the media predictions which use studio opinions as ground analysis. The difference between what we generally consume via news media versus what Bhandari documents couldn’t be starker.

In his Bengal section, the surprise state of the Lok Sabha election where the BJP won a big number of seats, Bhandari discusses how the voters were afraid of making their political preference known. Yet, they indicated their views using colloquial idioms and phrases and indirect signaling of their hardships, which they expected the BJP to resolve. These observations also point to why many pollsters call elections incorrectly – the sampling and the accuracy of the sampled responses may both be incorrect.

The book also covers the Hindi heartland states, where the BJP won comfortably. Bhandari talks about the extent of the BJP sweep in terms of people looking at a larger picture of what they thought was good for the country and their unflinching prioritization of national security over anything else.

His analysis of these states also showed how the Congress campaign on the Rafale deal was so far away from what the people thought about the issue. In fact, Bhandari’s discussions bring out two key factors – that the electorate trusted PM Modi on national security decisions and the country’s borders and security were not a matter of compromise. Voters trusted the government on Pakistan-related issues, contrary to the build-up of the opposition before the election.

Finally, Bhandari covers the southern states, where the BJP did not expand as much as it did in the eastern region of the country. His discussions show that many voters in the south still considered BJP a distant party, not very close to their issues and local priorities.

Usually in India, books on politics are either not very common or they tend to be glorifying of individuals. Very few books capture the flow of marquee events, which define how the government in the country evolves. While a lot of books came out after the 2014 Modi win, perhaps because many commentators thought of it as an aberration, not a lot has been said about the 2019 election. This book by Bhandari fills that gap.

The book comes with endorsements from Lord Meghnad Desai and Arnab Goswami. Several other known names like Samir Saran, Kanchan Gupta, Surjit Bhalla, Anand Ranganathan, and Chitra Subramaniam have written blurbs for the book. It is published by Rupa and comes at the hardcover cost price of Rs. 495.

Modi Mandate 2019 – Dispatches From Ground Zero is a good, political read, perfect to relive a historical election. It is a must buy, a must-read for anyone interested in Indian politics.

Modi Mandate 2019: Dispatches from Ground Zero is available for purchase from Amazon.

Aashish Chandorkar writes on public policy, politics, and current affairs. He is based in Pune.