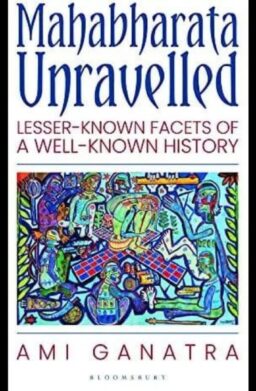 One of the most delightful developments in the Indian publishing scene in recent times has been the vast output of literature related to the Mahabharata. These books explore the story, important characters and key events through multiple perspectives, and motivate us to view our own lives and contemporary world through the historical, philosophical and spiritual lens of the Mahabharata. The authors of these books are doing, in our times, what spiritual bards and story tellers have done over the last several centuries: They interpret and narrate the story in the context of the ideals, ambitions and values that a populace holds close to its heart in each era.

Broadly speaking, the genre of Mahabharata-inspired fiction can be classified into two categories. The first is one in which an author explores a character primarily through an emotional prism: How did it feel to be that character in the story? What were their thoughts and feelings which made them act the way they did and which are not represented in the ancient, unabridged epic? Here, by the Sanskrit epic, we refer to one of the classical, well accepted Sanskrit recensions of the Mahabharata.

While this genre of writing has its positive aspects as it makes for a good read, it sheds more light on the author’s perspective than that of the character in the text itself. So these writings cannot claim to be Itihasa but merely the fictional account of the epic.  An attempt to rewrite a character through a contemporary lens may have its constraints due to the author’s lack of insight and imagination. As such, pertinent details presented in the original Sanskrit epic are either ignored or interpolated to suit the writer’s narrative. Often, the writer feels compelled to add details to the storyline, which may be completely contrary to the epic. It will not be untoward to assume that some of them may not even have read or consulted the Sanskrit epic.

The second category, the genre of Mahabharata-inspired fiction, is also one in which the author wishes to narrate the story from a contemporary perspective, but with the Sanskrit epic as the foundational basis. Here, the author has spent a considerable amount of time in reading and analyzing the Sanskrit epic in a scholarly manner. They are aware of the richness and depth of the study of character and human nature as available in the original epic itself. Therefore, their endeavour is to condense and present the story in a shorter, more accessible text for an interested reader, while remaining true to the essence of the original text.

This fascinating genre of literature makes us curious about the epic as it was “originally” written. Fortunately, we live in times when several primary editions of this epic and their translations are readily available. For example, the Critical Edition of the Bhandarkar Oriental Research Institute and the Southern (Kumbakonam) Recension are available online. The Mahabharata published by the Gita Press provides the Sanskrit text from Northern (Nilakantha) Recension and selected verses from Southern Recensions, along with their Hindi translation. We also have access to English translations, including, for example, Kisari Mohan Ganguli’s translation of the Calcutta edition in the public domain and Bibek Debroy’s translation of the BORI Critical Edition.

It is, however, not easy to jump into a detailed or scholarly study of the unabridged versions of the Mahabharata (which contain more than 100,000 verses), unless the reader is extremely motivated or has previous training in reading multilayered, multidimensional narratives. Ami Ganatra’s recent book “Mahabharata Unravelled: Lesser known facets of a well-known history” makes a valuable contribution in this direction. If a reader is eager to learn about aspects of the Mahabharata which are usually not alluded to in popular, abridged retellings or wants to prepare for a serious, long-term study of the epic, they will find a valuable resource in this book.

Based on a reading of the Gita Press edition, the Critical Edition of the Bhandarkar Oriental Research Institute and Kisari Mohan Ganguli’s English translation, the author brings together a summary and sequence of key events of the Mahabharata. She also presents brief and thoughtful analyses of important parts of the story that we are all curious about, but unable to think about critically due to diverse (and often, inaccurate and irresponsible) retellings on current entertainment forums.

An example that immediately comes to mind is that of Draupadi. Almost all TV series and some well-known novels are nearly unidimensional in presenting Draupadi as someone with repressed emotions, arrogant or revengeful. Ganatra, in the essay “The marriage that tied” in the book, recounts the story of Draupadi as narrated in the above mentioned Sanskrit epics. By reproducing the story of Draupadi’s life as presented in these ancient sources, the author provides the reader with a view of Draupadi’s resilience, wisdom, and her deeply held convictions about duty, as was originally conceived by the ancient narrator and compilers of the text. Many of us remember the disturbing scene in B R Chopra’s Mahabharata of Draupadi laughing at a distressed Duryodhana and calling him “the blind son of a blind man” during the Rajasuya Yajna in Indraprastha. We learn, after reading Ganatra’s essay, that no such incident is mentioned in the classically accepted recensions of the text. Quite on the contrary, Ganatra refers to the verses in the text, which describe how, as the queen of Indraprastha, Draupadi took care of the needs of every single guest in the Yajna.

One other example that comes to mind is that of Karna. In most of our current entertainment platforms (such as popular books and TV series), Karna is portrayed as a great warrior who suffered due to caste discrimination. In an essay “A friendship of doom”, Ganatra provides many details of the story of Karna from the Sanskrit text. While the text does not shy away from describing his skills as a warrior, it also presents a picture of someone who suffers from resentment and deep complexes from his childhood and is obsessed with defeating Arjuna. This obsession makes him misrepresent himself to his preceptor, Lord Parashurama, in order to gain knowledge of the Brahmastra. It also causes him to provoke his friend Duryodhana at every stage to fight the Pandavas. His deep resentment of the Pandavas and his obsession with wanting to be known as the greatest warrior on earth prevents him from viewing situations of conflict clearly, strategically and ethically.

Several other characters have been explored honestly in different essays in Ganatra’s book. As in the case of the above mentioned examples, by simply sticking to the Sanskrit text, the author succeeds in presenting to us an unblinkered view of lives, characters and actions of major figures in the Mahabharata. Ganatra’s writing style, essentially, is that of organizing and translating relevant verses in the Sanskrit text. She carefully chooses verses to give us a view of the grand, all encompassing scheme of Maharshi Veda Vyasa without recourse to any interpolations.

Another novelty of this book is that it presents short and engaging summaries of parts of the original epic that can cause confusion to an untrained reader. For example, we (the reviewers) have often struggled with the early chapters of the Adi Parva, which introduces the context of the narration of the Mahabharata. This includes the coming together of multiple stories, including that of a group of Rishis holding a conference in a forest retreat, the reasons behind a king and descendant of the Pandavas holding a grand snake-sacrifice Yagya, and a young boy who convinces him to stop the Yagya. After multiple attempts at making a headway into the first few chapters of the Adi Parva, we finally decided to skip to Chapter 97, where the story of King Shantanu starts. Fortunately for us, in Part 1 of her book, Ganatra summarizes the context in which the Mahabharata was narrated and also provides a family tree of the Bharatas. After reading her concise summary, we were motivated to start reading again the early chapters of the Adi Parva.

Ganatra also mentions short snippets about stories in Mahabharata which may not be part of the “main sequence”, but provide interesting historical, philosophical and cultural references. For the Mahabharata enthusiasts, she presents lots of “trivia” pertaining to the text. For example, what was the size of the armies that gathered in Kurukshetra? Who were the (handful of) characters in the book that desisted from fighting in the war? Who were the allies of the opposing sides? What were the mysterious Vyuha arrangements that the text takes pain to describe? “Mahabharata Unravelled” presents precise and easily understandable answers to these questions. This not only increases the level of awareness of the reader about Mahabharata, but also enthuse them to learn more. Most importantly, Ganatra’s book removes any initial fear or inertia that holds back the reader from delving into the original sources.

A study of the Mahabharata is one of the best things we can do, not only for our self-growth, but also to understand and appreciate the cultural and philosophical legacy of the great civilisation that we have inherited. Ami Ganatra’s “Mahabharata Unravelled” is a sincere, intellectually honest, transparent and engaging attempt to make inroads into the vast text. We recommend it highly to beginners and enthusiasts alike.