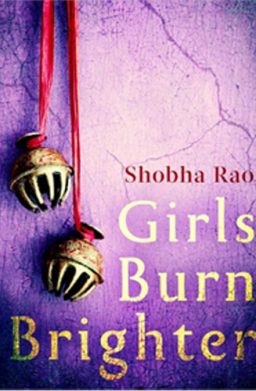 There is a new Indian born author on the block. Shobha Rao, burst on the writing scene in March 2018 with her debut book Girls Burn Brighter, with much fanfare in the International market. The book is about the friendship between two teenaged girls living in poverty in rural India in a village called Indravalli. Right away we are introduced to an old lady who insists that the grove of trees she planted are her daughters. We are then introduced to Poornima one of the main protagonist who is nursing her mother.  Poornima belongs to a poor family of weavers. As the eldest daughter she is burdened with house chores after her Mother’s death due to cancer and is forced to leave her studies. To append the family’s earnings Poornima’s father hires Savitha who comes from a family of ragpickers. The two teens become friends over a period of time and Savitha is moved by Poornima’s affection for her. Poornima always makes it a point to cook meals for Savitha who has never had anyone give her affection through actions. Poornima’s Father finds a groom for her after much haggling for dowry. Savitha decides to weave a saree for the bride by working over-time beyond her usual hours.

One night as Savitha is sitting alone in the hut weaving the wedding saree she is raped by Poornima’s Father. The shocked young girl runs away from the hamlet taking the half done saree with her. Poornima eventually gets married to her groom only to land from the frying pan into the fire. Her in-laws are the proverbial family from hell who make incessant demands for dowry and her husband beats her for lack of a child. Poornima decides to escape the brutality and go in search of her friend. In the mean while Savitha who ran away to Vijaywada is lured by a pimp who abuses her and exploits her for financial gains. She is subjected to immense torture and has to bend to strange demands of clients which include decapitation of a limb as a fetish. Poornima and Savitha face innumerable cruelties through-out the book. When Poornima decides to search for Savitha she is two years too late and Savitha has been trafficked to Seattle, USA to work as a cleaning lady for an Indian owned rental firm. Poornima hustles to land in USA and continues to search for Savitha. After much insurmountable obstacles and tragedies the two girls meet.

Rao has made the village temple on hillock and rice and banana a center point of memories. Simple things for most of us but a deep connect of happiness for the poverty ridden Savitha. This is the only saving grace of the whole book. Otherwise the book is a tedious read with too much of victim hood and endless melodrama. The storyline has poverty, caste, childless marriage, prostitution, human-trafficking, sexual abuse and coercion and everything in-between that a woman faces in India. The author has attempted to make a perfect paav bhaaji using all victimhoods and put them in the story. Does this mean women are treated fairly and equally in India? No, but just as pav-bhaaji will not taste good even if all the required vegetables are used without proper spices being used the book fails to grow on the reader because of poor writing abilities. The author has not etched out the characters properly and distinctively. Like the recent successful books like The Girl on the Train by Paula Hawkins or Big Little Lies by Liane Moriarty the story is narrated in alternate sections by the two main protagonists. While the grammar may be correct the words do not create a visual imagery for the reader neither do the characters make a deeper connect with the reader. So many incidents end abruptly disconnecting the reader from the characters. Instead of way too many obstacles and melodrama the story could have been made more engaging by having well etched out characters and bringing closer to the reader the girls’ fight for survival and their audacity of hope.

“Poornima felt herself sink, sink like a stone. She knew she was asleep, but she could still hear Savitha’s voice. It seemed to go on and on. Like the murmuring of wind, the fall of rain. And she heard her say, Don’t forget a thing. Not one thing. If you forget, it’s like you’ve joined the stone at the bottom of the sea. The one we’re all tied to. So remember everything. Press it. Press it between the folds of your heart like a flower. And when you want to look, really want to look, Poori, hold it up against the light.”

When Rao makes an attempt to create imagery there is no logic to it and the narrative sometimes ends abruptly. Case in point in the opening chapter, Rao, describes

“The most striking thing about the temple near the village of Indravalli was not readily apparent. No, one had to first climb the mountain and come close; one had to take a long, thoughtful look at the entrance. At the door. Not at its carved panels, or its fine graining, but at how the door stood so brave and so luminous and so alone. How it seemed to stand strong and tall, as if still a tree. It was the wood, lumbered from a grove of trees northwest of Indravalli. The grove was cultivated by an old woman—they said more than a hundred years old—who was childless. She and her husband had been farmers, and when she’d come to understand that she would never have children she’d started planting trees as a way to care for something, as a way to nurture something fragile and lovely. Her husband had surrounded the young saplings with thorny bushes to keep out wild animals, and it being a dry region, she’d had to carry water from many kilometers away to water them.”

In the above paragraph the reader is told the door is the striking thing of the temple but beyond one sentence there isn’t much description for the reader to be able to visualise this door and feel its importance the way author may have done in her imagination. Another point that stands out for me as an engineer who has studied irrigation engineering is the mention that the grove is supposedly in an arid region where water is scarce and in the next chapter Rao describes the village being located on the banks of Krishna river. Typically land close to 1km from a perennial river bank has good supply of water so the geographical dichotomy hurts an engineer’s mind.

This book received a large amount of publicity and gushing praise prior its release. Some of the notable mentions gathered from the internet are –

So the question that needs to be asked is why such a poorly written book receives so much attention in the International arena. The answer can be found in the term “atrocity literature”. In “Breaking India”, Rajiv Malhotra describes Atrocity Literature as a “technical term referring to literature generated by Western interests with the explicit goal to show the target non-Western culture is committing atrocities on its own people, and hence in need of Western intervention”. The British perfected the art of publishing atrocity literature when they wrote volumes of reports and fudged the number to ban the practice of Sati. Narratives created from atrocity literature have been main streamed and ingrained so deeply in our culture and writings that mediocrity is appreciated as long as it suits the narrative.  In her drive to add to the #MeToo narrative Shobha Rao loses a perfect opportunity to be a better engaging writer.