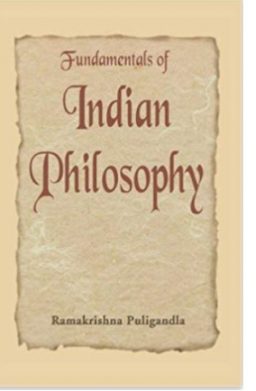 Ramakrishna Puligandla’s book- ‘Fundamentals of Indian Philosophy’ is a masterpiece book. It is a textbook apparently for many western university courses, and India should do the same at college level, especially for the non-philosophy students. It gives a complete picture of the Indian philosophy, something we have never been taught unfortunately at the school and college level.

The six systems of Indian philosophy are dealt with in a crisp and illuminating manner. The reading is very easy and is bound to stimulate people for further reading. Indians would realize the sheer strength and depth of the Indian philosophy. The antiquity of Indian philosophy is something, which most people in the country are completely unaware of. The Western philosophers have been either too ignorant of Indian thought or too arrogant to think that the East has nothing to contribute to philosophical thought.

There have been great exceptions of course. Walt Whitman, Ralph Waldo Emerson, Voltaire, and Schopenhauer were deeply influenced and impressed with Indian philosophy. But, most western philosophers would equate philosophy with only western thought. It would be as if only they had the right to speak and think about humanity and existential questions. They did not realize that any person in the world and at any time in history can have philosophical insights, which applies to humanity. As the author says, only Bertrand Russell made a distinction and wrote books on Western philosophy acknowledging the differentiation between the Eastern and the Western thoughts. For most, philosophy meant western thought only.

The Indian philosophical system is classified as orthodox or non-orthodox depending on whether they accept the Vedas as the oldest and the most sacred scriptures of Hindus. The non-orthodox systems are Charvaka (materialism), Buddhism, and Jainism. The orthodox systems include the six systems called Samkhya, Yoga, Nyaya, Vaisesika, Mimansa, and Vedanta. The first four are neither orthodox nor non-orthodox since they originated independently of the Vedas without accepting or rejecting them.

It is pertinent that Indian philosophy allows atheism and theism in the ambit of Vedic systems. Samkhya and Yoga in the original forms were atheistic, but its later evolution saw more theism without greatly altering the philosophical structure. The orthodox schools are combined in pairs. Yoga-Samkhya, Nyaya-Vaisesika, and Mimansa-Vedanta. The first element is the practice and the second element pertains to theory.

Except for materialism, all schools have the following common characteristics, in the words of the author:

1. Reason and experience can never be sacrificed to explain or account for reality.

2. Any philosophy should aid man to realize the chief ends of human life. It should not be a mere intellectual exercise. Philosophy should have soteriological power-the power of intense individual transformation from ignorance and bondage to freedom and wisdom.

3. Man’s spirituality is acknowledged and the purpose of philosophy is to teach that the state of ignorance and suffering is not due to original sin, but original ignorance.

4. There is no limit to the perfectibility of man.

5. Moksha or complete liberation must be acquired here and now in the present state and birth and not in some future life or place.

6. The practical aspects of Yoga are accepted in all forms to reach the state of liberation.

7. Karma and rebirth are the essential pre-requisites in the scheme of things, but is pertinent only to the empirical world and not the ultimate reality.

8. Reality cannot be understood by the senses or the intellect, but can be grasped in an intuitive, non-perceptual, and a non-conceptual manner. It is mystical in insight and cannot be subjected to the rigours of scientific experimentation and proofs.

9. All philosophies are initially pessimistic that they speak of ignorance and misery, but ultimately become optimistic as they give immense hope and proclaim the triumph of human spirit in gaining the ultimate state of eternal happiness. They categorically reject the philosophies of the Absurd, Angst, and Nothingness.

The pinnacle of all philosophies, of course, is the Advaita Vedanta of Shankara, where the reality as Brahman is the only thing. The world, which is a superimposition is neither existent nor non-existent. The concepts of illusion, Maya, karma, bondage are explained in fantastic manner.

After going through each of the philosophies in a systematic, brief, and lucid manner, the author raises two very important issues regarding Indian philosophy. One is the question of time and historicity in Indian philosophy; and second, the ignorant debate about Advaita being in opposition to Buddhism. It is a myth perpetuated by ignorant people and enhanced by political agendas that Buddhism was in some sort of a clash with Hinduism. There never was any.

Buddhism went out of the country and it dwindled perhaps in the country of origin on its own. After Buddha died, Buddhism became a divided religion with many schools and teachings, which included a good amount of ritualism, something which Buddha never encouraged in his life. It was an offshoot of Hinduism or Sanatana Dharma and peacefully co-existed with it. The story of Adi Shankara driving away all the Buddhists is just that; a story. In fact, Advaita philosophy is closer to Buddhism than to some other orthodox Indian philosophy schools.

The central concepts of Advaita are:

1. Brahman is the unchanging reality which is unborn, eternal, uncreated, and immutable.

2. Atman is the inmost Self of man, which is also unborn, eternal, uncreated, and immutable.

3. Brahman and Atman are the same and are both beyond names and forms.

4. Ignorance is thinking that our senses and intellect along with the phenomenal world is the ultimate reality. Ignorance is beginingless, but can end when the knowledge dawns that the Atman and Brahman are the same.

5. Maya is the power of Brahman to manifest the phenomenal world. Maya has no existence apart from Brahman and it is in the form of superimposition. It is neither real nor unreal nor both. It is present, but it is not the ultimate reality. The oft repeated criticism that the Vedantins believe the world to be illusory and hence non-existent; which in turn becomes the reason to stay away from the world stems from a lack of correct understanding.

6. Karma is a state of bondage from man’s ignorance and is generated by his own thoughts, words, and deeds.

7. Moksha is freedom from ignorance, which is to be attained here and now.

8. Knowledge and Truth are of two kinds-the higher and the lower. The lower is the product of our senses and the intellect and the higher is transcendental. The higher knowledge is soteriological-capable of intense transformation.

The basic concepts of Buddhism are:

1. Existence is pure flux. There are no eternal entities. Flux is a continuous process produced by craving.

2. The impermanence of everything leads to unhappiness.

3. Ignorance is the absence of correct knowledge to this reality.

4. Karma generates by words, thoughts, and deeds; and is responsible for the constant chain of incarnations.

5. Nirvana is release from the bondage to be attained here and now, which releases a man from his bondage and chain of reincarnations.

6. Knowledge is of two kinds-the higher and the lower. The former is non-conceptual, non-relative, and intuitive. The latter is a product of the senses and the intellect, and this applies to the phenomenal world.

It is important to note that all Indian schools, including Advaita and Buddhism gave importance and relevance to the phenomenal world. It was never antithetical to science, logic, arts, literature, and metaphors when applied to the phenomenal world. This allowed science, technology, arts, and literature to progress without any fear of persecution. This contrasts with the Abrahamic religions, where science was in constant clash with religion; and many times, the scientists and artists had to come out of the ambit of religion to do their work.

The process is still continuing in the West, where religion somehow is always in a bit of a clash with science. There is a tolerance now; but the full-fledged acceptance is still difficult to come by. This conflict is prominently and particularly missing in Indian thought. The acceptance of both levels of the phenomenal world and the ultimate reality has never resulted in any persecution of science and arts from the religious side. When the Chairman of ISRO breaks a coconut at Tirupati temple before the launch of a satellite or when the surgeon prays before his surgeries; there is no contradiction.

It is easy to see that there is a lot of similarity between both the philosophies. Advaita says that there is a Brahman as an unchanging reality, whereas Buddhism speaks of Shunyata, silence and nothingness- not eliciting an answer. Apart from this difference in nuance, the philosophical principles are very similar.

The author further points out how both Buddhism and Advaita place time and history as of secondary importance in the realm of the phenomenal world. The higher Truth and reality is beyond time and history and hence, this knowledge becomes timeless and eternal. So, both warn against the futility of trying to gain liberating knowledge through history, which belongs to the phenomenal world.

The study of history reveals to us a man in bondage, not man in his primordial reality; it shows man in the state of his ignorance, not the liberated man. Hence, history can never liberate man. And both are very equally emphatic about this. This is perhaps the reason why the Marxists can never be Advaitins or Buddhists, because for them history is the only thing!

This, then, becomes the major point of divergence from other religions, where history plays a very important role. For both a theist, who believes God and its creation of history as real, and an atheist who believes only history as god; reality will remain elusive. The historicists worshipping history and its mistress, the goddess of progress remain frustrated as far the reality is concerned; and become nihilist by tormenting doubts about the perfect nature of man. This is because progression of history rarely leads to the perfect and full blossoming of the human life.

It is interesting to note how most of the questions, which have been asked by the western philosophers in their age of enlightenment during 16th to 18th centuries and later perfected, have been asked and answered thousands of years back. The schools of Indian philosophy together have asked and found answers to most of the existential questions much before the western philosophy took its roots in Ancient Greece.

By the time of the Greek philosophers, the basic framework of philosophical thought of India had been completely sorted out and has remained unchanged. There has been no need for modification or reconciliation to any new progress in science and technology. That has been the solid strength of Indian philosophy. I highly recommend reading this insightful book to get a grasp of the vastness of Indian philosophy.

To purchase a copy of Fundamentals of Indian Philosophy by Ramakrishna Puligandla, click here.

(The review was also published on indiafacts.org.)

Dr Pingali Gopal is a Paediatric and Neonatal Surgeon practicing in Warangal.