Dharma and Ecology of Hindu Communities: Sustenance and Sustainability by Pankaj Jain 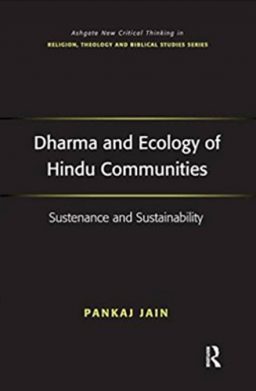 As religion has become one of the more tele-advertised commodities (as well as an alibi for and a target of violence), it has become difficult to trust – let alone relish – any talk about it. It may, therefore, be refreshing to heed a parallel development involving, on the one hand, academic critiques of secularism and modernity, and – on the other hand – re-visitations of those aspects of religion and spirituality that demonstrate particular benefits.

Pankaj Jain’s book belongs to the latter trend: It is an ethnography of three communities – the Swadhyayis, the Bishnois and the Bhils – that emerged at different points in time in what is now called India. “While … the Swadhyaya movement … arose in the mid-20th century in Gujarat as a ‘New Religious Movement’,” the Bishnoi community was founded in the 16th century, and references to the Bhils go at least as far back as the 13th century (pg 1).

These communities fascinate Jain because, without being “environmentalists” they have been more successful than the science-reliant, planning-oriented state in setting particular examples of “ecological activism” (pg 2):  If Bishnois are saving animals and trees from invaders, they are simply living their traditions, not ‘protecting the environment’ per say. If Bhils continue to practice their rituals in their sacred groves, it is their ancient tradition, not ‘saving the bio-diversity’. If Swadhyayi are building [tree temples], they are simply expressing their devotion and reverence for all creation according to the teachings of the [Gita], not ‘restoring the environment’. (pg 126)

Curious about what else to call and how else to explain and characterize these conservational attempts, Jain digs up their historical and field-based empirical details and offers for (and through) them a theoretically innovative framework of explanation and intervention.

The significance of Dharma

Creditably rejecting both “‘environmental ethics’ and ‘religion’ to interpret” the activities of such Indian communities, Jain proposes using the concept of “dharma”, instead. He argues that “dharma” is the “organizing principle” indigenous to India that “individuals interpret and apply … in their own situations freely” (pg 113).

As “the dharmic Indic traditions have [inspired] Indians to limit their needs” (pg 120), dharma could “be developed as an alternative anthropological category to study Indic traditions [and] successfully applied as an overarching term for the sustainability of the ecology, environmental ethics, and the religious lives of Indian villagers” (pg 3).

But inasmuch as dharma is also viewed as “a numinous power” by which to maintain and run society as well as the world, Jain believes that it “can help transcend the dichotomy of sacred and profane” – and “be effectively used to translate the scientific ecological awareness” for India’s local communities (pg 113, pg 102, and pg 115 respectively).

Socially, “dharma … can help spread environmentalism because of [its] multivalent significances” – given that “Hindus, Jain, and Sikhs of diverse backgrounds” as well as speakers of both north- and south-Indian languages use that term “to describe their traditions”. (pg 105)

Etymologically, Dharma is derived from Sanskrit dhr meaning to sustain, support, or hold In the Vedas prthivim dharmana dhrtam signifies dharma as sustainer of the earth. Although the Vedas celebrate the idea of rtam, cosmic order or rhythm, the term ‘dharma’ also appears in the [RgVeda], most notably in the Purusa-Sukta 10.90, ‘tani dharmani’ The idea of rtam was being reworded into dharma by the time of Purusa-Sukta. Earlier, yajnas [ritualistic sacrifices] were performed to maintain the rtam of the universe. (pg 106-107)

Further: the first usage of dharma itself is a reinterpretation of rtam in the [RgVeda]. Although both rtam and dharma have the sense of cosmic law and order that ‘sustains’ the universe, the mechanisms to achieve it shifts significantly from physical sacrifices to metaphorical sacrifice of a cosmic person [entailing] the move away from materialistic pursuits to more metaphysical ones (pg 107)

But to the extent that “the first few references of dharma in the Vedas” are interpretable “as cosmic law and order,” the meaning of that concept must necessarily incorporate the “ecology of the planets, the sun, and other cosmic entities.” However, Jaimini’s Purva-mimamsa-sutra (300-200 BCE) had rendered “dharma” as that which causes the good-and can be grasped and performed via Vedic instructions; in this respect, “dharma signifies virtues and righteousness” (pg 107).

Unraveling the meanings of “dharma”- including within the folk realm – Jain briefly charts its history, in which religions indigenous to South Asia show up as particular spins on that term (even as its reinterpretations continue via various texts, polities, philosophies, and historical interfaces) (pg 108-109). Through this flux, “dharma” has nevertheless retained an integrity:
By participating in different activities related to ecology, the practitioners of traditional communities … not only undergo somatic experiences but also … ‘relive’ the lives of Vedic sages and other mythical figures … This is the embodied imagination or the ‘ecological mind’ where perceptions, self-perception, and symbolic ideas resonate together. This is the level at which dharma means something to Hindus before it has acquired its extremely diverse lexical meanings and social functions. It connects the practitioners with the experiences of their gurus and their natural surroundings. (pg 114)

Jain calls the dharma-induced environmental care “dharmic ecology” – deeming it “a unique avenue for approaching environmental restoration today” (pg 4). While restricting its usage somewhat for rural, traditional Indians, he does not consider it incompatible with the modern environmental movement or even modernity. In fact, he briefly illustrates that the Swadhyayis and the Bishnois have flourished through modernity (pg 111).

However, he distinguishes dharmic ecology from the “social ecology” of “the activists of the Chipko movement” – whose predominant motive behind hugging the trees to prevent their felling was economic. They had correctly viewed “their surrounding forests” to be critical to meeting their “survival needs” (pg 130).

Within “dharmic ecology,” Jain identifies two key strands: ascetic (stressing austerity and renunciation) and devotional (faith-based, theistic, even celebratory, engagement with life intended to uphold sets of virtuous ideals). In contemporary times, Jain argues, “The ascetic model will need to be prescribed for those [with] extravagant consumptions [while] the devotional model may be suitable for both higher and the lower classes” (pg 118).

The three communities: The Swadhyayis, the Bishnois, the Bhils

The bulk of the book comprises sprawling profiles of the three communities: their origins, histories, beliefs, practices-and modes of spread; multidimensional biographies of  Pandurang Shastri Vaijanath Athavale (the founder of the Swadhyayi Movement) and Guru Jambhesvara (the founder of the Bishnois); and their ecological details as obtained through fieldwork.

Retaining “the Upanidasadic philosophy” that sees “divinity in every particle,” the movement undertook many tree-plantation, water-conservation, sanitation, animal-welfare (specifically cow welfare), land-rejuvenation, and agricultural projects (that Jain details) (pg 32). He also describes many successful Swadhyayi efforts at promoting cooperation among the farmers-and harmony between Hindus and Muslims.

Viewing them as part of “dharmic ecology”, Jain sub-classifies these efforts into “arboreal dharma” (“a dharmic environmentalism to worship and nurture the trees for their unique qualities”); “earth dharma” (“water harvesting and agriculture”-rooted in Athavale’s teaching that the earth is the sheltering mother of all, and given that the first two types of the four categories of Swadhyayi priests are required to be “experienced agriculturalists”); and “bovine dharma” (“a dharmic environmentalism to serve the cows as mothers”) (pg 31, pg 38, pg 41 respectively).

As for the Bishnois, the two key points of illustration include Guru Jambhesvara’s 29 rules and “120 statements”-and the community’s conspicuous contributions to wildlife and tree protection. Eight of those rules relate to ecological caring, “including non-sterilization of bulls, keeping the male goats in sanctuary, prohibition against killing of animals, cutting down of any types of green trees, and protecting of all life forms.” The Guru forbade “blue clothes, because the dye for coloring them is obtained by cutting several shrubs,” mandated vegetarianism (pg 59), and “advised people to follow only those gurus who preach non-violence” (pg 60).

Jain details several recorded episodes of the Bishnoi community’s efforts (pg 67-72). These include a 1978 incident whereby one “Mrs Rama Devi breast-fed a fawn to save his life” (pg 69) – and another on September 9, 1730, whereby “249 men and 69 women” got themselves butchered as they hugged khejari trees to prevent their felling by Maharaja Abhay Singh’s soldiers for a royal project. (The first person to hug those trees was Amrita Devi, a woman, after whom India’s government named a national award for wildlife protection in 2001.) Some believe that the Bishnois were a tactical inspiration behind the “Chipko movement” (pg 52).

Jain also highlights the Bishnois’ contemporary encouragement of animal lovers-including through a “nationwide wildlife protection organization called All India Jeev Raksha Sabha,” which (founded in 1975) was instrumental to “the banning of the hunting of the Great Indian Bustard in Rajasthan in 1978” (pg 70). (That organization itself had morphed from one “‘anti-hunting committee’” that had been founded in 1966.)

The most pertinent discussion regarding the Bhils (pp 79-94) focus on their “sacred groves” – which Jain divides into “two kinds”: those “based on the indigenous Bhil beliefs and folklores” and those that “also included the active participation of outside agencies and the government” (pg 93). Crucially, Jain situates the Bhils “in the larger Hindu culture of India” – as their protection of “their trees based on their faith in the deities surrounding them” is contiguous with the Hindus’ reverence for certain plants (pg 94).

On a comparative note, failing to find among the Bhils and the Swadhyayis an “evolution of religious ethos into ecological ethos” that the Bishnois have come to experience, Jain wryly makes the following comment: “Unlike Bishnos, Bhils and Swadhyayies are not seen protecting the ecological resources outside their sacred sites” (pg 94).

In that comment also lies the challenge for the environmentally conscious in how to approach and best utilize “dharmic ecology” – beyond developing a more tolerant and progressive view toward spiritual traditionalism and religious experimentalism. Jain’s painstaking research and thoughtful analysis – even though presented in sometimes repetitive, often cumbrous, writing – successfully brings us to that challenge.

Meanwhile, even though Jain perforce leaves out from his purview Muslims and Christians – the religious minorities of India – that do not fit into the broad Hindu fold, those he focuses on are also, in fact, not majorities. Wherefore, what his analysis ultimately demonstrates is “dharmic ecology” as the progressive promise of environmental care for rural, traditionalistic believers-from dominant religious groups – within the Indian cultural landscape generally. The Swadhyayis evoke teachings from many religions and ideologies, Bishnois were “in the 1891 Census of Marwar classified with Muslims,” and the Bhils retain some autonomy from mainstream Hindus (pg 55).

For all that, and a lot else, I will have to recommend the reader to toil through Jain’s arduous account!