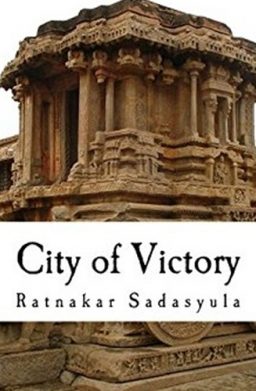 The City of Victory is a tale of Vijayanagar, an empire that dazzled with its riches and conquests and became one of the biggest empires of southern India in history. The book is written by Ratnakar Sadasyula, who, in spite of being a self-acknowledged amateur historian, does not miss any aspect of the rich historical and cultural heritage of this grand empire.

The book begins very interestingly with the political situation in United Kingdom, Japan, Lithuania and the northern part of India before turning its course to veer towards the banks of the Tungabhadra River. The developments in Indian sub-continent over the past three centuries are deftly narrated leading towards the moment when the mightiest empire of the south would be born.

The actual narrative begins with the two fabled founders of Vijayanagar ? Harihara and Bukka Raya encounter an astonishing sight that makes them consult their spiritual guide who gives them the advice of setting up a new city at the very spot – and that is how the foundation for Vijayanagar was laid. Giving the reader a good understanding of the various theories of origin of the two men as well as their accomplished guru, the book highlights the fact that this fledgling city, would in due course give rise to the richest empire of its time.

The rise of this empire was as much a result of man?s determination and grit as it was a result of the prevailing political situations in the country. Quite pertinent to Vijayanagar?s rise is the mention of the rivalry it faced from the other major political power in the deccan ? the Bahmani kingdom. The author keeps the narrative flowing on both the fledgling kingdoms and their rivalries throughout the book giving us an insight into how complicated and inter-dependent the relationship between the two was.

In his book, Ratnakar recounts not just the bloody battles and massacres of innocents but also the heights of glory Vijayanagar attained in the fields of art, architecture, music, religion, town-planning, irrigation as well the development of a multi-cultural and tolerant society. He mentions the many brave men who laid down their lives to protect their homes but does not forget the women and highlights their contributions as well.

At times, the stories shared seem so fantastic that you have to sit and ponder whether what they say about cinema is indeed true ? art truly mirrors life! There are improbable love stories, failed and successful assassination attempts, daring actions that surprise the enemy and humiliating defeats that force the natives parley with the transgressors on their terms. Covering the three centuries of Vijayanagar?s rise and fall also takes us through the strengths and frailties of human spirit.

Besides the two major powers mentioned before, the book also delves into the role the Portuguese played in the politics of southern India. It brings to light the extensive trade relations that the empire developed with countries as far as China, Java, Burma and Persia. The city was visited by multiple foreign visitors who marveled at its location, its towering citadels and looked at its riches in awe.

In author?s own words, today Vijayanagar exists only in stones and stories, but its legacy would forever be remembered and this book shall serve to remind us that history has a way of repeating itself and even the mightiest empires crumble when they become rife with internal strife. Looking forward to more such historical works from the author in the future.