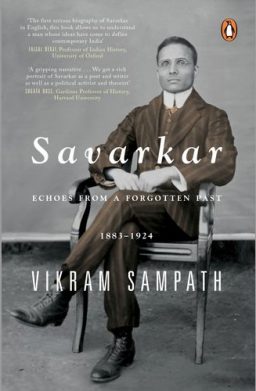 A curious conspiracy of silence entombs the memory of Vinayak Damodar Savarkar. His name is not generally known, his work lies neglected and unexamined, his thoughts are superciliously labeled and pre-emptively dismissed as ‘communal’. The intellectual dishonesty of a cabalistic few has deprived several generations of Indians any critical acquaintance with the life and times of a man who has played a significant role in modern Indian history.

What is it about Savarkar that makes him so “mad, bad, and dangerous to know”? Just what makes some of our academics and historians so queasy as to effectively reduce him to the status of a bogeyman, sans examination?

Dr Vikram Sampath asks these questions of himself and sets out to answer them dispassionately and methodically in a magisterial two-volume biography of Vinayak Damodar Savarkar, arguably the most controversial Indian in modern sub-continental political history. Dr Sampath’s approach is to throw a powerful beam of sunlight onto each aspect of Savarkar’s life that has hitherto remained unexcavated, and present everything that comes out in the critical, disinfective glare of clear daylight. A massive, multi-year research effort that included extensive investigation and assessment of original archival material in India and abroad has gone into the making of this biography, and the result is not just a comprehensive re-examination of the life of Savarkar, but also a re-appreciation, and in some important instances, a re-discovery of several significant aspects of India’s freedom struggle that have remained in darkness so far –  episodes and instances that deserve to be known by every conscientious Indian.

To cite a pertinent example, Dr Sampath brings home to us the horrors of Kalapani in authentic, technicolor detail. Every cell in the Cellular Jail was an Orwellian Room 101, and Dr Sampath systematically details the atrocities perpetrated by the sadistic British on the Indian political prisoners imprisoned there in cadentic, poignant prose. This was no Château d’If of The Count of Monte Cristo, but a literal, absolute hell-hole. Our emanciated freedom-fighters endured all this unimaginable physical and psychological torture for years, without any respite or any hope of release. Some did manage to come out alive, but they were never the same, Savarkar included.

But the beaten Savarkar is not the object of this biography.  Dr Sampath’s objective is to present Savarkar as he was from cradle to grave. So he starts by treating us to the birth and initial upbringing of Vinayak the boy, and then moves on to the boy’s growth into Vinayak the precocious youth, while parallelly detailing the times and milieu of the Chitpawan Brahmin community, the Maratha/Maharashtrian and Indian discourses on the burning issues of the day, and the activities of the political leaders and revolutionaries in the freedom struggle then agitating India and particularly Bombay and Poona. The inclusion of original verses of poetry by the talented boy Vinayak and other songs add a welcome historical feel and completeness to the portrayal of the early life of Savarkar in this section of the biography.

This examination of the formative years of young Vinayak has value beyond the merely historical. Oftentimes, well-researched biographies bring to fore psychological points that would otherwise remain hidden in history textbooks. So is the case here. Dr Sampath’s research shows how a clear pattern of extensive original reading and critical thinking by a sensitive young boy brought into his life a bent for rational and fearless investigation of the challenges and circumstances of life. This pattern is seen in many young people who have gone on to show subsequent promise in several fields. Such a pattern may lead one to excellence in a given line if the subsequent inflexion points in one’s life are positive, but if not, a haphazard life is indicated. In young Vinayak’s case, his life pattern collided violently with the harsh reality of alien rule in India, a reality that was all too visible to a bright young man in the making – and here, clearly, was the inflexion point that made, and finally unmade, Vinayak for life.

In unobtrusive words, Dr Sampath unfolds the subsequent significant episodes in Savarkar’s life in full detail, juxtaposing them with clear explications of the conditions and issues of political India as they unfolded. Savarkar’s initial revolutionary activities, his arrest, the daring escape on high seas, his subsequent capture and unfair trial, and the long, torturous incarceration at the Cellular Jail and the subsequent mercy petitions – all are brought to life clearly by Dr Sampath. These form the middle of the first volume and set the stage for the next part, the latter chapters, which examine the trajectory of the development of Savarkar’s principal political beliefs. The first volume ends at the year 1924, and therefore there is a break in the narrative. The soon to be published second volume would be all about the ideas of Savarkar and how they played out in the super-charged atmosphere of an India clamouring for independence, ideas that made Savarkar at once an ideologue to many and a demagogue to many more. But these latter chapters in the first volume even by themselves are of much value, for they serve to demystify the thick fog that surrounds the emergence of Savarkar the political thinker.

We witness, first hand, the development of Savarkar’s ideas and beliefs on the issue of the core identity of the Indian – who he is – and his attempts at assigning it a proper meaning. His penetrating insights on the ills of Hindu religion and society, the radical insights on the caste system and on the issue of cow protection, his progressive views on science and technology, all, as shown by Dr Sampath, portray the efforts of an intelligent man in trying to examine reality in accordance with his convictions.

(A more detailed appraisal of the political beliefs of Savarkar and the entire issue of Hindutva is deferred to the review of the second volume. We shall take up and examine all this in detail then.)

Sampath’s biography includes, by way of appendices, and also by way of quotes and extracts, several important documents authored by Savarkar. They can be directly examined by the curious reader to see for him/herself just what Savarkar said and thought, first-hand.  Clear color reproductions of several photographs of people and places, quotes from British documents and dispatches, an exhaustive bibliography, and extensive notes combine to add much value to this biography.

Savarkar was very much a product of his times, his zeitgeist. Today we can evaluate the life and work of this remarkable individual without fear, favor, or disfavor, thanks to Dr Sampath’s brave effort. It is all the more pertinent and piquant that this biography appears at a time when India is again in ferment, this time over Kashmir and Article 370. This adds a new sense of urgency to the perusal of this volume.

I eagerly look forward to the second volume, and if it is of the same level and extensity as the first, (and there is no reason for it not being so), Dr Sampath can lay claim to being the Walter Isaacson of Indian political history.

Purchase: Book can be purchased on Amazon here.

Harsha is a corporate legal consultant now transitioning to work in the field of education. He is interested in Samkhya, Yoga, Vedanta, Indology, Indian Philosophy,Read more