Railways and the Raj 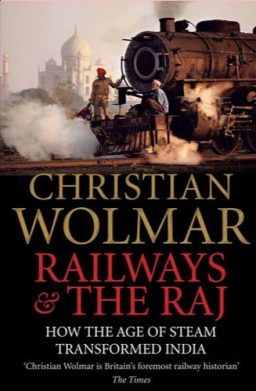 It will be difficult to find a single Indian who has not had any connection with the railways in this country. Whether it is the jam packed locals of Mumbai or the long distance ‘express’ trains or the ‘toy trains’ of a picturesque hill station, there is hardly a soul for whom the railways is a stranger. For those born before 2000s summer holidays meant a train journey. Either near or far Indian families packed half their household and took their children from cities to the villages to meet their grandparents and extended family. There are many songs written with the train as the main backdrop. Railways is one of the best connect with the British Raj for those born post-Independence.

Hence, a book on the railways is always a familiar territory ; something a person can relate with. Perhaps touch, see and feel the places mentioned in it. A book on an airline or on ships can seem unfamiliar to some. The author, Christian Wolmar a renowned railway historian based in the United Kingdom, does a fine job of bringing to us this history of the Indian railways. He is a veteran of fifteen books on transport, including many on the railway systems  in operation around the globe. A career journalist with a focus on England’s transport systems, he regularly writes articles, columns and has featured on television  and radio shows which focus on the railways.

Railways and The Raj is a wonderful take on the behemoth that is the Indian Railways. The first thing to strike you is the cover – a beautiful shot of an old steam engine and it’s signalling man, with the Taj Mahal in the background. The book provides a bird’s eye view of the development of the railways in India – from the first train which ran from Boribunder to Thane right up to the newly laid lines such as the Konkan Rail (1998).    The book maintains its uniformity throughout, which helps it make a good engaging read. It does not focus on providing very detailed technical descriptions, full of numbers and tables, hence more interesting and easily readable even for a lay person. The book describes how the challenging Bhor ghat was climbed and ferocious rivers forded in its opening few chapters. It is interesting to read about the Indian contribution by way of thousands of workers to these famous projects.

The biggest take away from the book for me was how it concentrates on the human factors. Instead of being a British centric account giving details of various ‘triumphs’, it focuses on the Indians affected by this tectonic shift in their lives. It was an unjust system where Europeans always travelled 1st and 2nd class, while majority of Indians travelled in Third Class ; the difference between the compartments was hugely visible. While the sahibs got private cabins to travel in, the crowds travelled in packed bogeys with little ventilation or sanitary facilities. The effects of the Indian Freedom struggle on the railways, borne mainly out of the treatment, meted out to Indians.

The book explains how the railways affected famines and pilgrimages. As also, the effect of the two world wars on the railways and people and the creation of trade unions ; all this followed by the sudden handing over of this colossus to Indians with zero experience of running it as managers! Pilgrimages used to be expensive and a time consuming activity – taking up days and even months in the plains. But the railways facilitated rapid movement of large numbers, leading to a surge at pilgrim centres. During the first and second world war, the railways facilitated rapid troop movements to the shores of India where ships waited to carry them to the front-line. But it is the rapid handover of the railways to an independent India that the reader will find most interesting. Independent India’s first few railway managers grappled with a huge network in a new country, the partition of that same network into India and Pakistan and above all, British officers who had seldom allowed Indians to rise above junior ranks, now desperate to leave the country! But win the railways finally did, even pulling off astounding feats such as building a rail link through the ‘chicken neck corridor’ in just two years before 1950!

The book also describes the economics of the system, and the various factors at play in the nineteenth and twentieth century. Similarly, problems faced by industrialists and policy makers a century ago, seem eerily familiar even today!  Should private companies do it or the government? What about the impact on the environment ? Which of these projects should we prioritize? It is interesting to read about tussles which happened a hundred years ago, but seem like they could be from today’s newspapers! I was surprised to read about the ‘guarantee period’ of some projects – twenty five years. Roughly the same guarantee period that is agreed upon for modern day projects in India!

The “Railway Budget” was a unique feature of our economics until very recently. Always separate from the Union Budget, which would be tabled the next day. This curious aspect of India’s economics has its origins in the British Raj grappling with the problems of running the Railways and financing it. A practice which lasted nearly a hundred years!

A serious lacunae of our school history syllabus is the complete absence of any mention of India’s industrialization. Indian entrepreneurs, engineers, manufacturers always faced a glass ceiling under the Raj. Native industry was stifled and Indians were never given managerial positions. The success of Indian industry in the post Independence period is a little celebrated triumph. The book partially fulfills this gap, at least as far as the Railways are concerned.

Thus, the book covers a wide range of topics and provides a rounded view of the Indian Railways. From the engineering challenges to the economics and from the effects on the people to the Indianisation of the Railways, this is an unputdownable read.

Book: Railways And The Raj