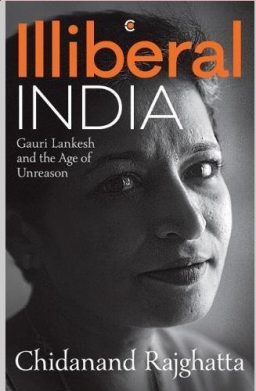 Let us for the sake of politeness, state our condolences to the family and friends of Gauri Lankesh, and that us hope for a swift capture of the culprits and a speedy closure to this case. Nearly a year ago, Gauri Lankesh was found murdered in her own house, shot by unknown assailants on a motorbike. The news was received with shock, and tributes came pouring in within minutes. The media hastily descended on her death, which was peculiar since she was relatively unheard of, or maybe ignored by the same media during her lifetime.

Gauri Lankesh was a veteran journalist, and before her end had spent the last few years struggling to keep her own weekly tabloid running. Her death was swiftly picked up by the media as the sign of troubled times, where free speech is stifled and dissent of any manner is punished. Chidanand Rajghatta builds on this narrative in his book, ‘Illiberal India’. Intended to be a “personal-is-political narrative”, Rajghatta, ex-husband and friend of Gauri Lankesh, paints a portrait of Gauri Lankesh while giving us a running commentary of the social and political change happening in India. For Rajghatta, Gauri Lankesh was the epitome of “amazing grace”, a “feisty” journalist who left the comfortable air-conditioned office-space to fight for the oppressed and the downtrodden of an India that is increasingly turning “illiberal”.

What then is the legacy of Gauri Lankesh? Why is a book being written about a journalist who had a marginal influence at best? It is known that she was leaning far to the left, having sympathies towards the naxalite movement. This group hasn’t exactly received accolades in India, given the recent unearthing of a naxalite plot to kill the Prime Minister (Would Rajghatta consider this to be another sign of an increasingly illiberal India, I wonder). Or perhaps, it is the manner of her killing that attracts so much sympathy? At any rate, any reasonable person will agree that we can evaluate Gauri Lankesh’s charitra independent of her manner of death.

After a meandering tour of college days with Gauri Lankesh and subsequent marriage, Old Bangalore, a reminiscing of the late P Lankesh (journalist and Gauri Lankesh’s father, from whom she seems to have received her far-left views) and the author’s fitness regime, we hit upon the first episode of Gauri Lankesh’s activism in the book. In 2005, Saketh Rajan alias Comrade Prem, a top-gun Naxalite and also state secretary of the banned Communist Party Of India-Maoist(CPI-M), was killed in a police encounter outside the Kudremukh National Park in Karnataka. Gauri Lankesh “wept uncontrollably” at the death of this man who perhaps started the Karnataka chapter of the Naxalite movement. She later wrote a fawning tribute to him in the Tehelka in what appears to be an attempt to give legitimacy to the Naxalite insurgency in Karntaka.

Let me provide another instance of Gauri Lankesh’s activism – Siddaramaiah, The former Chief Minister of Karnataka, in a very cynical political ploy announced a proposal to grant a separate religion status to the Lingayat community of Karnataka. Siddaramaiah came to power in 2013 riding a majority, but his reign was characterized by lawlessness and corruption. Facing a popular backlash, this plot served the purposes of extricating a politically dominant community from the folds of Hinduism and created fissures within the Veerashaiva-Lingayat community (who traditionally support the BJP). Gauri Lankesh wholeheartedly backed this move, as she saw Lingayatism as an egalitarian faith different from casteist Brahmanical Hinduism. While the embers of this movement seem to have died down for now, it has sown the seeds of discord in many regions of Karnataka, pitting community against community and mathas against mathas.

At this point, if you are wondering whether Gauri Lankesh really was fighting for the poorest in Indian society or was simply another Leftist ideologue spitting her poison on the majority community, you may want to see what else we can glean from Rajghatta’s book. To Gauri Lankesh, the Bhagavad Gita was just a “Brahmanical” text whose main objective was to reinforce caste discrimination. Her reaction to the support shown by the NRI communities towards the 1998 nuclear tests conducted by the Vajpayee Government was simply — “All NRIs are Chaddis”.

What is also striking is how vacuous her insights into Indian society are. For someone who professedly quit her career as a Delhi-based English-media journalist to work on the ground, she had remarkably little new to say about the Indian people. Her shrill rhetoric was no different from what can be found on any of the red rags that have sprouted online in recent years. This, on second thought, is not altogether surprising given that she referred to Kanhaiya Kumar and Umar Khalid of the infamous “tukde-tukde” gang as her adopted children. She had great admiration for what she regards to be the pristine, egalitarian Lingayat faith of Basavanna, the founder of the sect and expressed disappointment at the Lingayat community’s participation in the larger Hindu body. But why did the Lingayats abandon the principles of their pure faith and get attracted to the supposedly cumbersome rituals of Brahmanical Hinduism? Do the Lingayats really share her opinion about their place in the larger Hindu world? I bet Gauri Lankesh would have no answer to all of this.

The fact is, the halo that has been created around the persona of Gauri Lankesh doesn’t stand up to scrutiny. There is little to make her stand out from the other raconteurs of the far-left. If you were taken in by the media-built image around her following her death, a reading of Rajghatta’s book (unintentionally) unmasks it.

Towards the final chapters, Rajghatta lets out a prolonged wail on how pluralism and harmony in India is being destroyed, all thanks to the Hindu fascists, of course. An uninformed reader would be left with the impression that the internal societal conflicts in India have all arisen due to the belligerence of the Hindutva groups and them terrorizing the minorities of India. This is indistinguishable from the propaganda that the mainstream English media blasts us with everyday and it is tiring to read it all again in a book.

To conclude, if you wish to spare yourself of this eulogy for the tukde-tukde gang’s self-appointed foster-parent and lowgrade Hinduphobic propaganda, I suggest you give this book a skip.