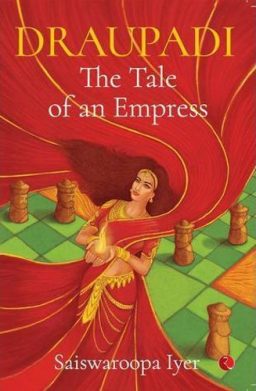 “Guru Patni must be having the same grief as mine; I do not want her to suffer the way I have suffered. Release Him.” With these words, the queen ( Sai garu, I should say Samragni right) releases the man who murdered her sons. Yes, it the mother Draupadi who thought of the grief of another mother when her kids were killed in cold blood.

Perhaps, the most complex and the most intriguing person of Mahabharatha is Empress Draupadi. The lady who was brought up with a dream of being the darling wife of the best Archer of the world had to be the wife of 5 brothers. The lady who did the Abhibrudha snana and got her hair tied while Veda mantras were being recited after the RajaSuya Yagna, was dragged by the same hair into a royal court and an attempt was made to disrobe her. That lady who had thousands of servants at her disposal had been a hairdresser during the agnata vasa. That lady who could have made a maid a queen had to pray to Krishna to feed an unannounced guest.

Tough was the life of that Samragni, however, what is more, inspiring was the way she chose to deal with her circumstances. She has inspired Indians across the ages, and many writers have written and rewritten her story. One such fantastic writer is Sai Swaroopa Iyer who tried to rewrite the story of Draupadi through her own lens. Here is what she wrote as a blurb of the book:

“Being born a princess and raised by a loving father and three doting brothers would make life seem like a bed of roses to any woman. Born out of the sacred fire, Draupadi is no ordinary woman, and her destiny cannot be to walk the beaten path. Witnessing estrangement and betrayal within her own family makes her perceptive and intuitive beyond her years. Complicated marital relationships, a meteoric rise and a fateful loss, humiliation unheard of and a pledge of revenge, all culminating in a bloody war—her ordeal seemed never-ending. Yet she stands up to it all—never succumbing, never breaking. One of the most unforgettable characters of the Mahabharata, Draupadi shows what a woman is capable of. Told with great sensitivity and passion, this book brings alive a character of epic proportions that resonates with every reader across space and time.”

This book starts with Janamajeya asking his grandmother Uttara about the great Queen Draupadi. Uttara begins with the birth of Draupadi, spends a little time regarding her childhood and transports us to here swayamwara. Then we see Draupadi the ambitious queen, the queen who tries to build a strong empire from the forests of Khandava Prastha. Then we see the Rajasuaya, and she becoming the Samragni. Then we see the dramatic turn of events where she is insulted as a slave by Karna, Dussasana and Duryodhana. Soon we follow her to the forests of Kamyaka, Dwaita and from there to the Himalayas. After an agonizing 12 years, we see her don the role of sairandhri in the palace of Virata. Once the 13th year completes we see her breathing energy into the battle that annihilates majority of the Rajamandala from the earth.

Her joy of victory is short lived as she loses her sons to the rage of Aswatthama. We see a different Draupadi who pardons him and then helps Yudhishtira rebuild Indraprastha and Bharatavarsha.

With her gripping ghantam (pen), Smt. Sai Swaroopa Iyer through Uttara as her narrator, keeps us glued to the book.

What did I like in the book?
I enjoyed the way in which the Draupadi’s swayamwara was narrated, this is the closest I read to the original of Veda Vyasa. The author tried to dispel a lot of myths. Sai Swaroopa Iyer is a master at delivering layered meanings. In Draupadi, she continued what she did in Abhaya, Avishi and Mauri, she made Draupadi speak things that are true even today. Draupadi’s conversations during the keechaka episode are worth their weight in gold.

Also, Uttara’s words that speak about preserving history are fantastic. It’s as if she is speaking those words for us. Here is what Uttara says –
“The whole point of reciting the records of the past is to learn from the exploits of our ancestors, take pride in their valour, strength and courage, while gaining wisdom from the stories of their tribulations. If people judge their ancestors because of false notions about history, it is only a matter of time before the population is uprooted from the values their ancestors fought for, and falls apart”

The author tried to portray Iccha Sakthi, Gnana Sakthi and Kriya Sakthi in the form of Draupadi, Sri Krishna and Pandavas. I think she did that with style and flying colors. Then Sai garu’s portrayal of Shri Krishna, who is her Ishta daiva in 3 out of her 4 novels, shows her madhura bhakti towards him everytime she writes. He is on a different pedestal altogether. Looks like He too is enjoying this, and is blessing the author and her ghantam (pen) with more and more power. Hope this Jugalbandi continues and we see more of Sai garu and Shri Krishna.

The description of vanavasa was excellent. The author has brought in the various events incidents that happened in Vanavasa vividly; we see Arjuna’s penance, the story on sougandhikas, dwaitia vanam, ghosha yatra, yaksha prasnas and the story of Jayadradha, all of which has been depicted very well. For reasons unknown to me, I like YudhistiraYudhishthira a lot, and many writers don’t give him his due. The author tried to portray a new Yudhishthira to all of us. Actually to me the Aranya parva belongs to Yudhishthira and the author has indeed portrayed him from various perspectives here.

Then comes the part which every Telugu Mahabharatha lover would enjoy, “Kunjara yudhammu doma kuttuka jochchen”jochchen”. This is a very famous samasya poooranam in Telugu. It means that a group of elephants have entered the proboscis of a mosquito. When Tenali Rama was challenged to recite a poem that has this line, he speaks about the Agnata vasa of Pandavas and says the way they entered Virata’s kingdom was akin to a group of elephants entering a mosquito’s beak/proboscis. I felt as if I’ve eaten a full meal after reading this portion! Every Telugu sahitya priya would feel very pleased to see this in the book.

Lastly, I will have to say that I loved the way Draupadi’s love and affection for other women – Subhadra, Uttara, Dussala is portrayed, that in a way completed Draupadi’s persona.

What I did not like.
I have a few issues with the liberties the author has taken while writing the book. Well every writer needs his/her creative space but I feel in my personal capacity, that few things in the itihaasa are non negotiable and hence should be left as is. So in many ways, these are my problems than the shortcomings of the book. These might not be much of an issue for many other readers.

In popular Mahabharta narrration Pandavas win a fair battle against Drupada. Yudhistira in popular narration is known for his honesty and character, but in the book Sai changes the story to reflect Yudhistira with some character flaws. This could have been avoided.

Kunti in this book is totally different from the Kunti of Mahabharatha as we know, again whic I found a bit unappealing. Actually in Mahabharatha, Kunti comes across as the lady wedded to dharma and one who works for self -actualization. She comes across as a very accommodative person who does not dream of kingships and power games. Her whole life seems to be of sacrifice, she having Karna, sharing space with Madri, then being at the receiving end of the shapam given to Pandu Raja, sharing the mantra with Madri to beget children, losing her husband, seeing her children struggle and seeing that all of them have the same wife because of the slip of her tongue, then seeing the sons do Aranyavasa and Agnatavasa, losing her eldest child in the battle of brothers. It was a tough life isn’t it? Any lady who has seen so much sadness would at least want to enjoy the comforts once her son becomes the king. You know what Kunti says in Mahabharata after the war is over? She goes to Shri Krishna and says –
“Yadavulandu paandusutulandu nadhIwara moha vich
chedanamu cheyumayya ghansindhuvu cheredi ganga bhangi nI
paadasaroja chintanamu pai nanisambu madeeya budhdhi natya
adara vrutti to gadiyuntluga cheyu eeswaraaa”
Meaning – She wants Shri Krishna to remove her attachment from Yadavas (her family by birth) and Pandu Sutas (her children) and she wants her mind to become one with the God the way river merges into the ocean. When Dhritarashtra and Gandhari leave for the forests after the war, she too accompanies them and refuses to stay with her sons who were the rulers of the Bharatavarsha. Showing this mighty lady as a person who plays palace politics felt somewhat out of place.

Bhishma does not kidnap the princesses, he goes to their swayamwara, announces that he has come on behalf of his brother, defeats the kings and takes the girls with him. The author uses the word kidnap and that was not needed. Again it is the Pandavas who go to Bhishma and ask for the secret to astra sanyasa. The author makes Draupadi do it in book. I felt that it was unnecessary as Draupadi was already the Ichcha Sakthi even without that. The author could have left that “Kriya” to the Pandavas.

The part regarding the burning of the Khadava forest could have been handled in a much better way. This is because a lot of anti-Hindu authors claim that Aryans used to burn forests to create dwellings. Now, this is speculation, and they twist the story of the burning of the Khandava forest to suit this narrative. The author did try to change the narrative; however, it would have been better had she brought the celestial element also into the place. For, Arjuna gets his bow Gandiva from Agni to complete the task of Khadava dahana. Somehow, I felt that Arjuna’s role was cut short a little. The author might have had her reasons in doing so but from a Mahabharata enthusiast’s perspective, I felt so.

To Conclude.
When you put aside the complaints of an old fashioned chandasa like me, (most of you would find them trivial either way) this is one of the best works of Smt. Sai Swaroopa Iyer. She tried to balance a lot of things, gave us some very good messages and enthralled the readers with the gripping story. I am not flattering her, but a few decades from now, if people have courses on adaptations / re-tellings of Indian epics, Draupadi of Smt. Sai Swaroopa Iyer would either be a course book/ a reference study for the students.

I sincerely hope for that day to come.

I love writing about Hinduism and spirituality in Hinduism. There are great secrets in the ancient texts of Hinduism and exploring them is one ofRead more