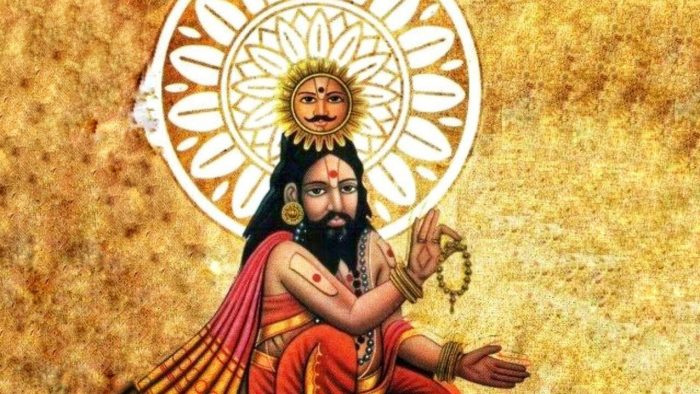 Yoga is one amongst the six schools of thought developed assiduously by our ancients in their quest for the ultimate truth. Yoga Yājñavalkya, an ancient, authentic treatise on Yoga, gives the definition of the term Yoga (Yoga Yājñavalkya. I.44) in accordance with this supreme goal:

So the focus of this text is on the attainment of union with Brahman and each one of the twelve chapters aims to strengthen the seeker with the necessary qualifications.

The presentation of the work is unique – it is in the form of a dialogue between sage Yājñavalkya and his learned wife Gargī in the presence of other sages, as an answer to her request to be taught Yogatattvam. 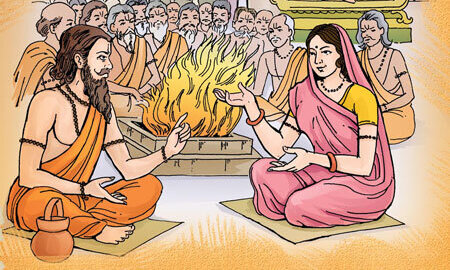 Yājñavalkya being well-versed in Smṛti throws new light on brahmacarya and mitāhāra. His general definition for brahmacarya, which is very popular is (Yoga Yājñayavalkya I.55) :

He goes on to elaborate this, by specifying brahmacarya according to āśrama and varṇ āśrama. One noteworthy point is that he considers service one’s guru as brahmacarya (Yoga Yājñayavalkya I.59 cd):

Texts like Haṭhayogapradīpikā, Śivasamhitā, and Haṭhasaṅketacandrikā have elucidated on mitāhāra as an important aspect yama. Yoga Yājñayavalkya (I.66cd-67) provides another insight based on the Smṛtis. It said in Yogasūtras that mitāhāra differs according to one’s stage in life. For saints it is eight handfuls of rice, for those in vānaprastha it is sixteen, for gṛhasthas it is thirty-two and for brahmacaris it is according to their wish.

On the second point of niyama, while Yogasūtras (II.32) specifies five qualifications: शौचसन्तोषतपः स्वाध्यायेश्वरप्रणिधानानि। – purity, contentment, austerity, the study of self and devotion to God, Yoga Yājñayavalkya specifies ten. They are tapaḥ, santoṣa, āstikya (belief in dharma and adharma), dāna, īśvarapūjana, siddhāntaśravaṇa, hrī, mati (faith in scriptures), japa and vrata. While Patañjali does not include this in niyama, he recognizes this important tool, by stating japa as (Yogasūtras. I.28) तज्जपः तदर्थभावनम्।meditation on the meaning (of praṇava). Yājñavalkya’s definition varies – According to him, it is the repetition of the mantra as ordained by the scriptures; in another definition of japa (Yoga Yājñayavalkya.II. 13), he states that the study of Vedas, sūtras, Purāṇas, Itihāsas, and practices ordained there constitutes Japa.

One additional point that he mentions (this is also given in Manu Smṛti), is the potency of the mantra with reference to the manner of Japa (Yoga Yājñayavalkya.II. 25cd-26). Mantra repeated by whispering is more powerful than that uttered aloud; mental repetition is more powerful than uttering with open lips; a meditation on the mantra has greater power than this.

The third limb of Yoga, āsanas, has been defined by Yogasūtras (II.46) as स्थिरसुखमासनम् ।; it also gives the benefit of practicing āsanas. Yogasūtras (II.46) includes freedom from disturbances of pairs of opposites in this prerequisite. Yoga Yājñayavalkya gives eight basic āsanas in great detail (Yoga Yājñayavalkya III.3-14). It reiterates that the performance of āsanas(II.48) helps in removing toxins from the body and maintaining good health.

The Yoga Yājñayavalkya stipulates yama, niyama, āsana, and nāḍīśuddhi as a prerequisite for practicing the fourth limb of Yoga, prāṇāyāma. This important limb has been dealt with in Yoga texts, Svaraśāstra, the Vedas, Tantra, Āgama, and Āyurveda texts as prāṇā influences one’s mental state, which in turn influences physical well being.

Patañjali defines prāṇāyāma (Yogasūtras II.9) as श्वासप्रश्वासयोः गति विच्छेदः प्राणायामः। ‘The cessation of the movements of inhalation and exhalation’. Yoga Yājñayavalkya (VI.2ab) gives a different definition by saying: प्राणापानसमायोगः प्राणायाम इतीरितः। ‘The union of prāṇā and apāna is prāṇāyāma.’ Yoga Yājñayavalkya (Ch.VI) explains different types of prāṇāyāma saying that kevalakumbhaka is the best. Some of the methods are for advanced practitioners where the prāṇa is guided through the chakras and suṣumna. The advanced method of prāṇāyāma is where recaka (exhalation) and pūraka (inhalation) are absent and only kumbhaka (retention) is done. He recommends the repetition of syllables of the praṇava for brahmins and kṣatriyas and repetition of Siva or Vishṇu mantras for women and others. Haṭhayogapradīpikā emphasizes that prāṇāyāma should always be learned under the guidance of an able guru and the advanced level explained here definitely warrants guidance.

The fifth limb of Yogasūtras is pratyāhāra is the withdrawal of the sense organs from external objects. Yoga Yājñayavalkya gives four definitions for pratyāhāra. The first definition of Yoga Yājñayavalkya (VII.2) echoes the same meaning as Yogasūtras. The second is that whatever one sees, one should see it as one’s own Self and within the Self. The third is that those actions enjoined by the scriptures should be done mentally by the Yogis and not externally. The last one is the procedure by which air is led from the head to the toe through the marmasthānas and this will relieve one from bondage (Yoga Yājñayavalkya. VII.24 – 31).

Yoga Yājñayavalkya (VIII.2-3) gives a different definition मनसः स्थितिरात्मनि: According to it, dhāraṇā is to rest the mind on the Soul, which lies in the inner core of the heart. Yoga Yājñayavalkya (VIII. 5-25) suggests five types of dhāraṇā corresponding to five regions of the body. At each region, the air should be retained and the respective deity should be meditated upon with the respective bījākṣara.

Dhyāna the seventh limb is defined by Yogasūtras (III.2) as तत्र प्रत्ययैकतानता ध्यानम्। Yoga Yājñayavalkya (IX. II. ab) defines dhyāna as ध्यानमात्मस्वरूपस्य वेदनं मनसा खलु। Dhyāna is the realization of the Self through the mind. It is further classified into five types of saguṇa dhyāna and two types of nirguṇa dhyāna. Practicing dhyāna will eventually lead to samādhi.

In the first type (Yoga Yājñayavalkya IX. 5-9) of nirguṇa dhyāna the Self which is effulgent, omnipresent, pure is meditated upon. In the second, one should realize Brahman in the heart-lotus as the embodiment of Bliss after initiation by the guru.

The final step of aṣṭāṅgayoga of Patañjali is samādhi, the ultimate goal of all Yogic texts. According to Patañjali, there are various types of samādhi, the general definition being(Yogasūtras III.3): तदेव अर्थमात्रं स्वरूपशून्यमिव समाधिः।

Yoga Yājñayavalkya (X.2) defines samādhi as समाधिः समतावस्था जीवात्मपरमात्मनोः। The process to attain samādhi is as follows (Yoga Yājñayavalkya. X. 4-10): One should perform his duties as laid down in the scriptures – vidyuktam karma. He should seek a guru and be well instructed in Vedānta. He should resort to a holy place and remaining in the company of saints, practice Yoga. Seated in padmāsana on kuśa grass or skin of antelope facing the east or west, he should close all the nine holes of his body and awakening the heart-lotus by the practice of prāṇāyāma, focus on the Self. He should bring prāṇa to the top of his head or mid-point of the eyebrows and utter the prāṇava with his mind focussed on Brahman.

We have seen that the various concepts and methods of Yoga have been presented in a comprehensive and logical manner detailing the preparation, performance, and results of each of the limbs. There are a few concepts that are unique to this text.

These concepts are not found in Yogasūtras though it is found in later texts. The details they are the specification of pre-requisites for the practice of Yoga, nāḍīśuddhi, nādānusandhāna,  descriptions relating to the physical body- nāḍīs, types of vāyu, marmasthānas, and kunḍalini.

In the Yoga Yājñayavalkya, every human being is said to be 96 aṅgulas in height (four aṅgulas measured as the width of one’s own four fingers). Prāṇā is figuratively explained as dispersed up to 108 aṅgulas (Yoga Yājñayavalkya. IV.7). The objective of Yoga is to make it equal to or below 96 aṅgulas.

An interesting observation regarding the jīva in the Yoga Yājñayavalkya (IV. 19cd) is that it is propelled by its merits and demerits: पापपुण्यप्रचोदितः। Unlike many Upaniṣads that declare that the jīva resides in the heart, Yoga Yājñayavalkya (IV. 20) enunciates that it resides in the navel and moves within the nābhicakra like a spider moving in its web.

Nāḍīs – which are tubular vessels are prāṇavāhinyaḥ.(GS I.25) If they are not purified, the air circulated within the body becomes toxic. According to Yoga Yājñayavalkya (IV. 56 cd), there are seventy-two thousand nāḍīs and fourteen are principal. The benefits of nāḍīśuddh (Yoga Yājñayavalkya V.21-2) are lightness of the body, good digestion, and nādābhivyakti.

Nādānusandhāna – The procedure has not been dealt with in great detail as in later Haṭhayoga texts the experience is described (Yoga Yājñayavalkya VI.56). He says that one should take the prāṇa through the suṣumṇa to the crown and gives the nādās that will be heard as the prāṇa progresses to the crown.

Patañjali refers to three aspects of karma, jñāna and bhakti when he says (Y.S. II.1) :

Jñāna is an integral part of Yoga and Yoga includes the eight limbs propounded by Patañjali though with some variations. Karma according to him, is the spiritual endeavor ordained in the scriptures – vaidham karma and vidyuktam karma and this karma has to be performed till one leaves the body. While all other Yogic texts remain silent on the role of Śruti and Smṛti, Yoga Yājñayavalkya insists on the performance of such duties.

Karma is classified into pravartaka and nivartaka, a classification that is also given in Vāsiṣṭha Samhitā. The role of jñāna and karma in the attainment of liberation has also been emphasized in the Bhagavad Gītā:

(This paper was presented by Dr.Vasumathi Rajaram at the International Conference on Philosophy and Praxis of Yoga conducted by Indic Academy and Indica Yoga on February 15th and 16th 2020)