Text As The Metaphoric Body: Incorporation Of Tripurā In Saundaryalaharī – Part I 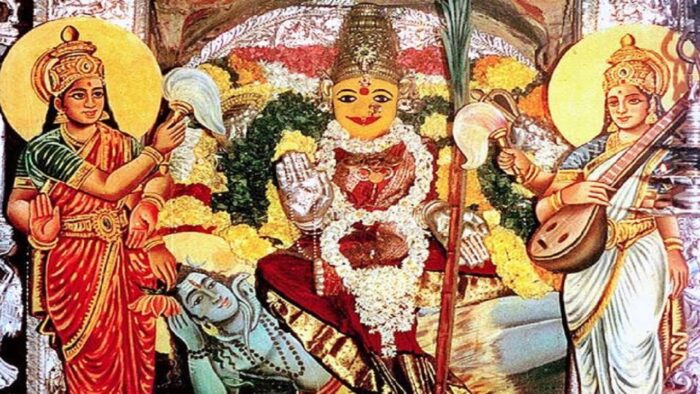 Saundaryalaharī is a classical Sanskrit text in one hundred stanzas dedicated to the goddess Tripurasundarī. The central argument of this paper is that this devotional hymn – a textual body comprised of metaphor and aesthetic suggestion – mirrors the deity being praised, as she is the goddess of beauty. The author effectively introduces an embodied Tantric theology that places sensory experience at the center of mystical and transformative experience. With select examples from the text, this essay analyzes the varieties of literary suggestion utilized by the poet to depict the transcendent experience.1

Anatomy of the Text

Saundaryalaharī (SL), a devotional poem traditionally attributed to Śaṅkara,2 is one of the most revered and widely read texts with Tantric content. The multiple commentaries that accompany it, the wide distribution from north to south of the Indian sub-continent,3 the multiple translations into English and various other regional languages,4 and the frequent recitations in temple and house rituals demonstrate its popularity. The text is composed in one hundred verses,5 in the Śikhariṇī meter, with seventeen syllables in each quarter of the verse.6 It is divided into two sections: the first, identified as Ānandalaharī, consists of forty-one verses, and the second, Saundaryalaharī, of the remaining verses. The first section relates to the philosophy and ritual visualization of Tripurā while the second is specifically dedicated to describing the physical beauty of the goddess, also called Sundarī, or the beautiful one. The text exemplifies a fusion of Tantric Śaiva and Śākta elements and Advaita philosophy.7 SL is a fine example of the fusion of aesthetics and Tantra.8 The text is essentially Tantric,9 with its central theme being the glorification of the goddess Tripurā.10 Composed in light of Śākta non-dualism, the text integrates elements from Kubjikā practice into Tripurā worship.11 The text traditionally comes with a manual where each verse is assigned with its own magical formula and geometric design. Whether through ritual transformation of self-awareness (the primary focus of the first section of SL) or through embodying the divine in her corporeal form (the focus of the second section), the centrality of physical experience is apparent throughout the text, and it is in this embodied spirituality that the integration of the aesthetic domain occurs within Tantric practice. The term Tripurā, referring to the central goddess described in the text, demonstrates a fluidity that embraces immanence and transcendence at the same time. Even the name reflects this, as the term can be analyzed etymologically as both ‘before or beside the triad’ (tribhyaḥ purā), and as ‘she who dwells in three cities’ (trisu pūrṣu bhavā).12 The goddess is simultaneously addressed as Sundarī, the beautiful one, invoking her association with aesthetic beauty. The combination of both these names, Tripurasundarī, indicates an integration of the mystical and aesthetic aspects.

The philosophical foundation for the rise of this Śākta paradigm breaks the dichotomy between the immanent and transcendent. Tripurā is beyond the triad and thus transcendent, while dwelling in all three cities. The formless in this depiction is latent with forms, and when given form, they eventually dissolve into the very awareness nature of the body of the goddess. Rather than being exclusive, these transcendent and immanent modes are considered here as interdependent. With the coalesced identity of Tripurā and Sundarī, encountering the divine implies the recognition of aesthetic beauty. This integration highlights the role of language, as the poetic description woven throughout the text is inseparable from the linguistic body of the goddess. Like mantra language that cannot be translated, SL cannot be fully deciphered, with its aesthetic domain layered within the form of the text, as has been recognized by the classical commentators.13 This understanding displaces the commonsense comprehension of language as corresponding to reality; reality and language are not binary opposites here. To ground some of these arguments, this paper explores the link between mystical and aesthetic language.14 In addition, rather than comprehending textual meaning in the minimal sense, I also explore in this paper the ways classical commentators opened up the text for a broader hermeneutics.

Pioneered by Bharata, the classical aesthetic tradition was advanced with the writings of Tantric aesthetes such as Abhinava or Jayaratha. The central literary devices in this system include ‘ornamentation’ (alaṅkāra), rasa or aesthetic relish, and dhvani, indirect suggestion.15 Alaṅkāra involves both the form of expression, the very language a poet uses that has characteristics such as rhyming, and literary tropes that relate to content, such as metaphoric and metonymic expressions.16 Rasa, central to classical Indian aesthetics since Bharata’s writings, identifies the psychological states ingrained with experience, such as erotic, comic, heroic, etc. Bharata outlines eight rasas that emerge with the integration of the emotional states (bhāva). There are eight emotions categorized as ‘dormant’ (sthāyin) and thirty-three collectively addressed as transient (vyabhicārin). In addition to these, there are also some psycho-physical conditions (sāttvika). All of these fall under the category of emotional states (bhāva). To this structure, Abhinava adds ‘peaceful’ (śānta) as an additional rasa.17 Dhvani or the suggested meaning, on the other hand, relates to the structure of poetic meaning, and is found in the domains of both alaṅkāra and rasa. While one can read SL as a Tantric text, one can also read it as a sublimely nuanced aesthetic document. Every single verse in the text displays one or another literary trope, and many of them are exemplary in their integration of multiple devices. The author of SL, in his effort to materialize the beauty of the goddess Sundarī, creates in words the aesthetic ‘body’ of goddess, replete with devices central to Sanskrit poetics.

The central argument of this paper is that the process of describing the beauty of the goddess is a technique for transforming a commonsense awareness into a mystical one. Language mediates this process: the select poetic expression, with the beautiful body of the goddess as the target, does not end in mere depiction of her physical beauty, as it culminates with the poetic beauty (saundarya) of the text. This is exactly where the aesthetic domain meets the esoteric domain, with ‘aesthetic beauty (saundarya) being a means to reach to the ‘beautiful one’ (Sundarī). In this process, the text mirrors the divine body by incorporating the aesthetic beauty.

This argument relies on textual analysis filtered through the aesthetic viewpoint, as the effort of the author of SL clearly intends to match the beauty of the goddess with his poetic genius. The description of the beautiful one (Sundarī), along these lines, mirrors the inner beauty of Tripurā. In this process of describing her beauty with an incorporation of the qualities of beauty outlined by classical aesthetes, the text transforms into the body of the goddess. The embodiment of divinity, vivid in this depiction, embraces both emotional and cognitive domains. Language and sensory modalities are very much active and creative in this process of experiencing the divine that is both transcendent and immanent. Even recitation of the verses filled with literary tropes that describe the divine in the flesh, the very process through which the divine form is grasped and experienced, is entwined with language and somatic experience. The distilled beauty expressed in the stanzas that refer specifically to the limbs of the goddess’s body are themselves the limbs of the text. In this way the text transforms into the divine body. Based on this assumption of the integration of the esoteric and aesthetic, this paper grounds the argument that the centrality of embodiment in both Tantric and aesthetic systems is at the core of this melding of the two systems. Transformation of commonsense experience to a transcendent bliss may be achieved by devotees through devotion, through self-realization by the Tantrics, and through aesthetic experience by the connoisseurs of literary tropes and layers of suggested meaning. In this respect, generating the body of bliss parallels the constructive visualization of the body of the goddess that integrates the aesthetic experience. In essence, SL is exemplary in combining both esoteric and aesthetic experiences. The integration of beauty and bliss in SL corresponds to the practice of Tripurā. Tripurā demonstrates her lavish nature and the practices centered on her are identified with the order of the Gandharvas that involves the assertion of pleasure, ornamentation and fragrances, and contemplation instead of asceticism.18 The ritual manuals explicitly state that not only is the goddess sensuous, even her practice involves sensuality. This physicality is fundamental to constructing the divine image as the aesthetic beauty materialized, and parallels the construction of SL as an embodiment of the divine beauty in poetic language. This position opens up the possibility of self-recognition through the bliss experienced in realizing the corporeal beauty of the goddess. Just as the language describing the beauty of the goddess and the metaphors suggesting aesthetic bliss parallel esoteric experience, these qualities are integral to ‘experience’ itself. In this depiction, just as all cognitive modes are permeated with awareness, all instances of cognition in the same way involve the sense of aesthetic pleasure. The two names of the text, “waves of bliss and beauty,” describe this very intertwined nature of Tripurā practice.

The objective of the SL is not only to depict the body of the goddess. While describing the beauty of the divine body, the text aims to transform the experience of the reader/practitioner both aesthetically and mystically. The term to properly describe this transformation is sāmarasya, which, in its aesthetic sense, means ‘having identical taste,’ and in the esoteric sense of Tantra and Haṭhayoga, refers to the ‘mingling of fluids.’ Both the mystical and aesthetic experiences become a single targeted ‘meaning’ of the text, and the device of literary suggestion (dhvani) becomes the means to access this experience. While the use of rasa or aesthetic ‘juice’ is consonant with the concept of sāmarasya, the poetic ornaments (alaṅkāra) parallel the physical ornaments adorning the body of the goddess.

This fusion of Tantra and poetics becomes possible with the affirmation of the body, and finding the divine as immanent and the self as embodied. Encountering the dazzling form of Tripurā in SL parallels the recognition of the self: in essence, the self that is the heart of aesthetic experience is in itself the fundamental nature of beauty. Here the boundary of inside and outside dissolves, as the beautifully described form of the goddess mirrors the beauty within, and what constitutes the sacred is the pristine and beautiful aspect of the self.

The paper was first published in Zeitschrift für Indologie und Südasienstudien 32 (2015) and has been republished with author’s permission.