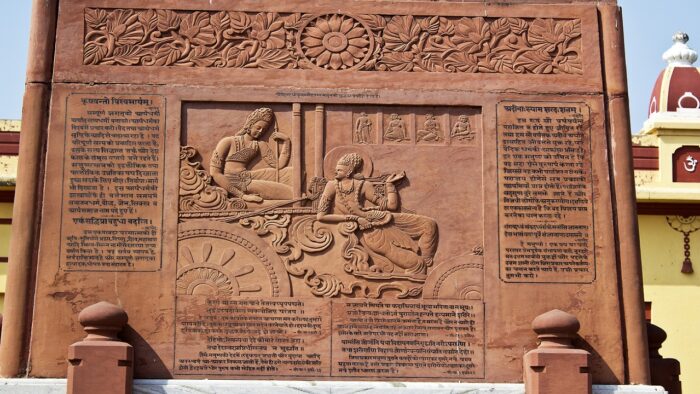 The Indian tradition has always revered the Bhagavad Gita as a text of marvelous universality with the ability to throw light on many aspects of an individual’s life journey. Further, its importance is underscored by its preeminence as a source book of Indian Psychology. Indian Psychology is a modern appellation given to the extraction, compilation and consolidation, from Indian sources, of the principles of psychology based on the framework of concepts and categorization of the western tradition of psychology.

In an attempt to give a practical orientation, the article will examine briefly the principles of Indian psychology that influenced the life of three national leaders who have publicly acknowledged their debt to the Bhagavad Gita, having been life-long students of the text viz. BG Tilak, Sri Aurobindo and Mahatma Gandhi. The uniqueness of their personality/leadership will be correlated to the Bhagavad Gita’s unique repository of the Principles of Indian Psychology.

The traditional view of the Bhagavad Gita regards it as one of the PrasthanaTrayi – the three-fold scriptures of Hinduism, the other two being the Upanishads and the BrahmaSutra.[1] Of these the Bhagavad Gita is most widely read and translated. It has been translated into Indian languages (1412 translations), into English (273 translations) and other languages (191) translations.[2] Radhakrishnan regards the Bhagavad Gita as “a religious classic than a philosophical treatise ….. And that it is a powerful shaping factor in the renewal of spiritual life and has secured an assured place among the world’s greatest scriptures.”[3]

Psychology was born as a separate discipline in the late 19th century. The early 20th century commentaries on the Bhagavad Gita by Besant & Das (1905), Aurobindo (1928) and Tilak (1935, English translation) contained no references to psychology at all.  The credit for the first exposition (in 1928) of the Bhagavad Gita on the basis of “psycho-philosophy & psychoanalysis” goes to Dr. V G Rele, a doctor-surgeon by training and a keen researcher of Indian Scriptures.[4] Professor Jadunath Sinha has many references from the Bhagavad Gita, amongst others, in his three volume comprehensive survey on Indian Psychology published in 1933. And thereafter, there has been a steady stream of research articles and books based on the psychology in the Bhagavad Gita until this day. Professor R. Ramakrishna Rao, the doyen of Indian Psychologists, recently published (in 2019) his psychology-based rendering of the Gita with a focus on its implications for counseling.

Before examining the psychological insights from the Bhagavad Gita, a quick look at Indian Psychology and how it differs from Western Psychology is useful. The following table[5] summarises the differences: 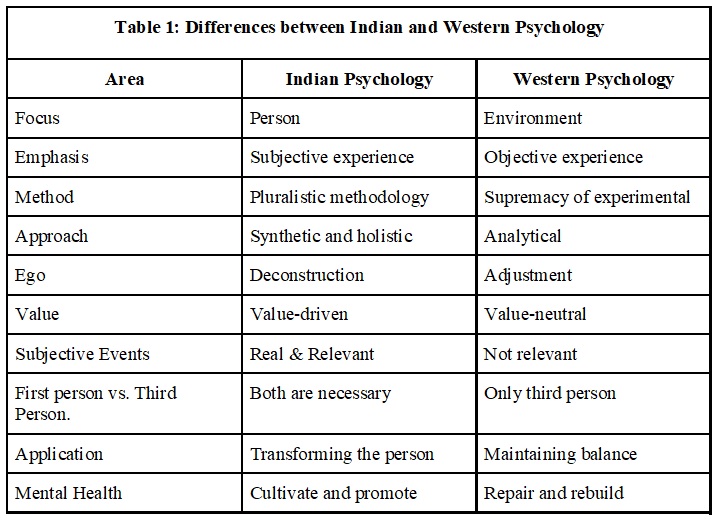 Swami Akhilananda’s astute observation, made in 1948[6]: “It is our opinion that Hindu psychology is more dynamic as it trains the individual mind to manifest all its latent powers….Hindu psychologists are primarily interested in the study and development of the total mind rather than in the different functions considered separately…The experimental psychologists of the West are interested in particular phases of mental activity.”

So what are the psychological insights (through the viewpoint of Advaita Vedanta) that the Bhagavad Gita has to offer about human nature that have obviously stood the test of time and continue to be significant? I present below the meta-theory of Indian Psychology and I acknowledge with humble gratitude the pioneering work of Rao & Paranjpe in distilling these features. I have also attempted to correlate these features with appropriate verses of the Bhagavad Gita.

We see that the Bhagavad Gita delivers with surprising modernity and universality, a comprehensive picture of the human personality along with minute  guidance for enabling a person to overcome existential crisis & anguish with the time- tested certitude of success.

The prima facie objectives are similar i.e. to study the human mind, psyche, human behaviour. However, the supererogatory objective of Indian Psychology (as intuited and understood from the Bhagavad Gita) is perfection of existence and moksha; while similarly though less grandly for Western Psychology, it is mental health and solutions to practical human problems.

Some areas of Indian psychology are eminently suitable for experimental research. Meditation research is a case in point. There is voluminous experimental data collected under controlled conditions which include investigation of neurophysical correlates of meditative states, influence of meditation on cognitive and other kinds of skills and benefits of meditation on human health and wellness.

There are also other methods of modern psychologists that have relevance to Indian psychology. These include field studies and observations of naturally occurring events. The techniques include surveys, questionnaires, interviews, rating scales, participant observation and content analysis. Another method that has been successfully put into practice is the single-case study. We will use this method to study the impact of the principles of Indian Psychology in the lives of BG Tilak, Sri Aurobindo and Mahatma Gandhi later in this article.

A very brief exposition is presented below about the impact of Indian Psychology as epitomised in the Bhagavad Gita in the lives of Lokamnaya Tilak, Sri Aurobindo and Mahatma Gandhi.

Tilak was one of the great leaders of India in the struggle for independence. He was a public intellectual, journalist and scholar. It is during his imprisonment in Burma (Myanmar) that he wrote Gita Rahasya a scholarly commentary on the Bhagavad Gita aimed at explaining its secret (rahasya). It is in this work that he interprets the basic principles of Karma Yoga.

Tilak strongly believed in the Karma-Yoga-Sthithprajna[7] model from the Gita as relevant in practical life with a spiritual focus. The following sentence from Gita Rahasya says it all:

“Ideally a person should attain inner calm by purging the mind of all desires through the realisation of the identity between the self and Brahman. One should thereby attain equanimity, and malice towards none. Upon attainment of such a state one should set an example for others through one’s own behaviour, and help everyone around oneself in attaining spiritual progress.”

This is what Tilak preached and practiced throughout his life. Two incidents exemplify his character. When he was sentenced to 6 years imprisonment in 1908 and when a friend remarked that he would soon be taken to jail, Tilak is reported to have casually remarked, “What difference would that make? The British have already turned the whole nation into a prison. All they will do is to send me to a different cell in the same prison.”

When his eldest college-going son succumbed to plague, Tilak remained unmoved and remarked to his son-in-law: “Is it not natural, after all, that we would lose some firewood when the whole town is up in flames.”

Sri Aurobindo’s life and philosophy have many facets – militant, terrorist, extremist, revolutionary, and spiritual. His association with revolutionaries who plotted a bomb blast led to his imprisonment in Alipore in 1908. While in jail he had a series of deep spiritual experiences about which he spoke in the famous Uttarpara Speech where he said: “Then He placed the Gita in my hands. His strength entered into me …..I was not only to understand intellectually but to realise what Sri Krishna demanded on Arjuna and what He demands of those who aspire to do His work, to be free from repulsion and desire, to renounce self-will and become a passive and faithful instrument in His hands…..” [8]

One result of the realisation was the centrality of the Bhagavad Gita in all of Aurobindo’s writings.[9] Sri Aurobindo called the yoga of Gita by various terms purna yoga (complete yoga), integral yoga. In his view the yoga of Gita was an integral combination of different paths -jnana, karma, bhakti and self-perfection. The Yoga of the Gita is meant for experiencing, practicing and living it, rather than merely arriving at an intellectual understanding.[10]

As a consequence of this inspiration, Sri Aurobindo has to his credit a very remarkable record as a great scholar and man of letters. He has written voluminously (30) volumes) and on a variety of subjects. The psychological principles in Sri Aurobindo’s writing have served as the inspiration for the renaissance of Indian psychology.

While deeply absorbed in public and political life from 1893 to 1948, Mahatma Gandhi had lived with Bhagavad Gita as his primary source of ethical, moral and spiritual inspiration. The Bhagavad Gita was a life-time companion to Gandhi. It was his spiritual reference book. He first read the Bhagavad Gita through its English translation by Edwin Arnold and later on went to reading the Sanskrit original. He subsequently translated the Gita himself into Gujarati under the title of Anasakti Yoga. Gandhi spoke and wrote about the Gita very extensively[11] and his conception of human nature was derived from the Gita. His life was a continuous and constant attempt to live upto the ideal of the Gita.

If one would give an appellation to Gandhi’s interpretation of the Gita it would be Anasakti Yoga-Sthithaprajna. “True individuality is reducing oneself to zero.” -this is the central thesis of interpreting the Gita as Anasakti Yoga. Anasakti is non-attachment. Non attached action is self-action and delinked from the ego. Delinking the ego from action and deliberate refraining from enjoying the fruit of action lead one to reduce oneself to zero or nothingness.

The description of sthithaprajna, a self realised person, in the last 19 verses of the second chapter of the Gita, was very special to Gandhi. As is well known for nearly 60 years until his death, he recited them daily during prayers. These verses contained the quintessence of human nature that Gandhi incorporated in his world view.

Indian psychology becomes a living tradition through the Gita and stands on the shoulders of eminent practitioners and scholars leading to a better understanding and handling of human existential crisis and its resolution through better informed existential quest.

[9] Minor, Robert.(1991). Sri Aurobindo as a Gita-Yogin in Modern Interpreters of Bhagavad Gira

Conference on Hinduism and Modern Psychology 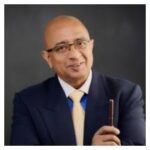