Swastika: A Sacred Symbol Of Hinduism, Jainism and Buddhism 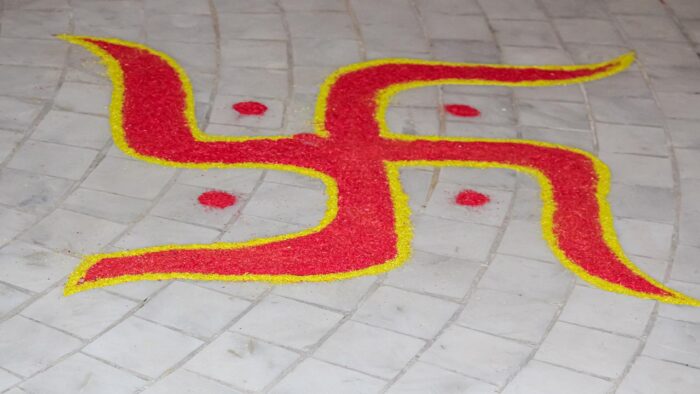 Indian art conveys its meanings in a distinct symbolic language. These symbols were used as beautiful decorations and as a vehicle for conveying ideas. Symbols such as “The lotus, the full vase (Purna-ghata), the Svastika, the wheel (Chakra), the three jewels (Triratna), and the kalpavriksha (Wish fulfilling tree), as it were of an alphabet, are being used with perfect mastery as elements of decoration;” (Agrawala, 1965, p. 47 ). These motifs, though of Hindu origin, were equally important in Jainism and Buddhism as well. Apart from using as beautiful decorations, these symbols were also used for conveying ideas.

“These symbols formed an integral part of Indian thought for ages serving like pegs of religious and metaphysical ideas. Their meaning was ingrained in the consciousness of people” (Agrawala, 1965, p. 47). The rich external and internal meanings of these symbols enriched the Indian art and made it more appreciable. They added philosophical understanding and depth to the religion.

Some historians consider “+” (cross) as the beginning of Swastika. In the Neolithic age, which spread almost all over the world, many geometric forms were used for decoration. As per these historians, Swastika was one of them. Illustration of this belief is illustrated in Fig. 1.

As per Thomas Wilson, first appearance of Swastika was apparently in the Orient among the forerunners or predecessors of the Brahmins and Buddhists. At all events, a religious and symbolic signification was attached to it by the earliest known people of this region. He also mentions that in the Bronze Age Swastika appears internationally and was used as symbol as well as an ornament.

Fig.2: Various forms of Swastikas around the world (qtd. in Wilson 6)

Was Swastika Invented by Aryans?

As Swastika is found almost in all parts of the world, it has given rise to many interpretations. Hence it is also difficult to determine the origin of Swastika, due to which, there are many theories and interpretations on its origin.

Fig. 3: Probable introduction of Swastika into different countries as per Count Goblet d‟Alviella (qtd. in Wilson 32)

Count Goblet d‟ Alviella also “argues that Swastika sign was employed by all the Aryans except the Persians. This omission he explains by showing that the Swastika in all other lands stood for the Sun or for the Sun-God, while the Aryans of Persia had other signs for the same thing-the Crux ansata and the winged globe. His conclusion is that there were two zones …the first belonged to the Greek civilization, which employed the Swastika as a Sun symbol; the second to the Egypto- Babylonian, which employed the Crux ansata and winged globe as sun symbols.” (Wilson 33). Thus, as per him Swastika is an Aryan Symbol.

Most strongly believed theory is that Swastika was invented by Aryans and moved all over the world along with the spread of the Aryans in India in the East and Europe in the West. It travelled to the East and West during Bronze Age.

Therefore, they believe that Swastika was used by Hitler to show the purity of Aryan Race. Atrocities of Hitler hence has earned, this Swastika symbol the hatred among the Europeans who suffered heavily during the Hitler regimen.

One has to rely on the available literary, painted and sculpted references as well as excavated objects and to make the conclusions. Hence, this paper is trying to provide evidences to remove this misconception, and show the Origin and development of Swastika in India, its adoption in Hinduism, Jainism and Buddhism, as well as its meaning and use in these 3 religions in India, in this paper.

Swastika and Its Origin in India

Author of this paper strongly believes that Swastika is one of the earliest forms, which originated in India and later in other parts of the world. It was symbolically used all over the world. Following are the proofs, on which she has based her belief.

During excavation at Harappa, a seal was discovered. This seal is the earliest evidence of usage of Swastika in the world found so far, belonging to the period of Indus Valley Civilisation. “This seal has an inscription of three pictograms and a man carrying a manger with propitiatory offering for a tiger standing in front of him. On the reverse side after repeating the same inscription, a raw of five Swastikas are inscribed as auspicious symbols signifying security and good luck.” (qtd. in Akhtar vii), (Balaram, Movement of Textiles and Textile Motifs between India, China and Japan , 2012) According to K. N. Sastri, “the sealing was obviously an amulet against possible dangers arising from the depredations of tigers”. (qtd. in Akhtar vii).

Fig.4: Seals from Indus Valley Civilisation preserved at the British Museum. Top right hand side ones are the Swastika and Suvastika seals. Source: British Museum (IndusValleySeals_swastikas.JPG)

Early Literarily References of Swastika in India As per Max Muller, the earliest literary reference in India to the name Swastika was made by Panini (mid-4th century BCE)1 in his book of old grammar. He mentioned that when the ears of cattle are marked with Swastika, they are referred to as Svastika-karna, and in such a case the “a” at the end of the word should not be pronounced as a long “a”. Max Muller further gives later literary reference as that of the Ramayana (ed. Gorresio II, 348) “that Bharata selects a ship marked with the sign of the Svastika”…“Varahamihira in the Bhrat-samhita mentions certain buildings called Svastika and Nandyavarta, but their outline does not correspond very exactly with the form of the signs. Some Sthupas, however, are said to have been built on the plan of the Svastika.”(qtd. in Wilson10). B. B. Misra, on p.23 of his article, Polity in the Agni Purana has mentioned, “Swastika is one of the eight types of yogic seats mentioned in the Vayaviyasamhita of Shiva ”Quoted in (Balaram, Movement of Textiles and Textile Motifs between India, China and Japan , 2012, p. 54). This yogic seat is also mentioned in Matsya Purana” (qtd. in Akhtar vi). Scholar Fred Pincott has referred to the Swastika as the reunion of the four castes of the Hindus (qtd. in Akhtar vi).

Fig. 7: Nandavartaya, a third sign on footprint of Buddha

Swastika is a symbol drawn using an equilateral cross with its main line drawn horizontally and its arms bent at right angles either clockwise or anticlockwise. The Hindu version of Swastika often displays a dot in each quadrant as shown in Fig. 1. At times Swastika is also rotated to 45 degrees. In Buddhism, the central line of Swastika is always kept horizontal. In Jainism, the ends curve more as shown below.

As per Gandhi, the four arms of Swastika represent four grades of existence of soul. These are 1. Archaic and protoplasmic life. 2. Plant and animal life 3. Human life 4. Celestial life. 1. Archaic & protoplasmic life. (Balaram, Movement of Textiles and Textile Motifs between India, China and Japan , 2012)

One can only say that the swastika should perhaps be left-handed if it denotes polar revolution, and right-handed if (as in Buddhism) it symbolizes the course of the sun.

Meaning and Symbolism of the Word Swastika

Swastika is considered a sacred symbol in Hindu, Buddhist and Jain religions of India. Even in the most ancient times Swastika was regarded as an auspicious sign. (Balaram, 2011)

“The name Swastika has been derived from su meaning ‘well’, asti meaning “being, to be or it is” and ka is used as a suffix (Jamnadas Akhtar, The Swastika p. V). It is also known as Svastikaya meaning “sign of benediction or of good augury” (Rgyatch‟errol pa, vol. II p. 110, cited by Thomas Wilson, The Swastika p. 41)

Early Use of Swastika in India

In India, Swastika was initially used as an amulet against possible dangers. Later it was used as an auspicious symbol religiously, culturally and socially. Though its use was found from the beginning of Indian civilisation, its religious use was first established in Hinduism, then it was adopted from Hinduism into Jainism and Buddhism.

Use of Swastika in Iconography and Architecture in India 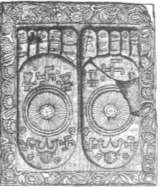 Based on these architectural patterns created by linking many Swastika together, similar patterns were first created in Korea, in 13th c. CE. and later used in Japan too for creating textile patterns. In Korean, Swastika is called Wancha and mun means pattern. Koreans have claimed such patterns, known as Wancha-mun. In Korean where many swastikas are linked together, originated in Korea in 13th c. CE.  The above photographs seen in fig.12 gives the proof that such patterns were already existing in India at least 2 centuries before in 11th c. CE. Similar pattern is called as sayagata or Manji tusnagi pattern in Japanese. Japanese word manji is used for Swastika and tsunagi means sequence. Hence, Manji tsunagi means sequence of Swastika .(Balaram, “Swastika in the East and the West”, 2011)

Another very interesting use of Swastika in Indian architecture is seen in the construction of a fort in a Swastika formation as per Vastu. As per Birodkar, “In Sanskrit, Vasa means to inhabit and Vastu means habitation. While Su means good. The word Swastika might be an amalgam of the terms ‘Su‘ and ‘Vastu‘ pronounced as ‘Swastu’) meaning ‘a good habitation’. Incidentally in Sanskrit the term Swasta means calm or peaceful. Thus, the term and concept of Swastika might as well be a derivation of the name of a defensive structure which due to its impregnable character was looked upon as a good habitation.” (Birodkar, n.d.) Quoted in (Balaram, Movement of Textiles and Textile Motifs between India, China and Japan , 2012)

Fig. 14: Swastika formation for fort with 4 gates marked with dots, saves the 3/4th of inhabitants when the fort falls in enemy hands, unlike the fort with one gate, where the fall of single gate may cause massacre of all.

Use of Swastika as an Auspicious Symbol During Religious, Festive and Socio-Cultural Occasions in India

Swastika always has ve been an auspicious symbol in Indian culture. All the religious and auspicious ceremonies like poojas for birth, upanayana sanskar, wedding, house warming, death rites, include Swastika symbol painted using kumkum. Thus, Swastika has been interwoven and become an integral part of the lives of Hindus, Jains and Buddhist all over the world.

Fig. 16: Swastika painted on umbro, the threshold of a house in Maharastra (Swastika, Wikipedia)

Looking at the above evidences, it is clear that Swastika originated in India during Indus Valley Civilisation. Swastika that reached Europe was developed in 13th century BCE, along with migration of Aryans, which had no connection with Indian Swastika and Indian philosophy.

Migration of Swastika to the East (East Asian countries such as China, Korea and Japan) has been covered by the author of this paper in her Ph.D. thesis dated 2012, which could not be accommodated in this article.