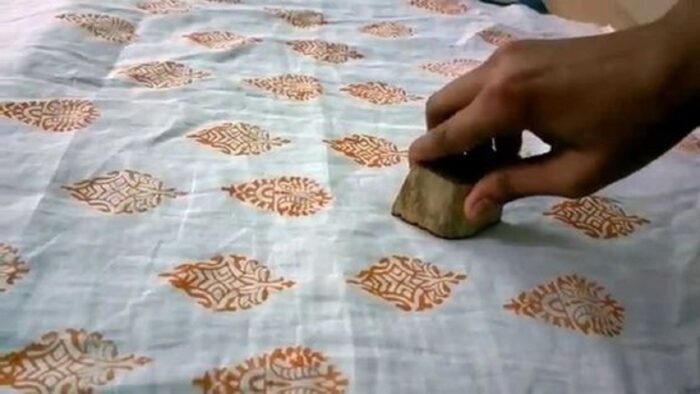 “Our most valuable and most instructive materials in the history of man are treasured up in India.” – Mark Twain

Rituals and traditions practiced in Hindu dharma have deep meaning and spiritual significance in our lives. “Bhatti Pujan” or furnace worship is one such ritualistic tradition practiced by Namdev Chippa community of Ummedpura-Tarapur village in Madhya Pradesh, involved in traditional craft of hand block printing and dyeing of textiles. Namdev Chippa community living in the village traces its lineage with Sant Namdev, a tailor by profession & a famous saint of Bhakti tradition who lived during 11-12th century.

Namdev Chippa community involved in the craft of traditional hand block printing used to beautify textiles with different patterns and designs with wooden blocks. Wooden blocks are used to print mordant (color binder) and then dyed it with natural dyes using boiling process known as “Bhatti karna” (Boiling in furnace).

During “Pitru paksh” (Days dedicated to ancestors) for 15 days they stop doing boiling process and after Pitru paksh is over they consult with the Pandit for muhurat (suitable time) to start boiling process for dyeing printed textiles, a ritual known as “Bhatti Pujan” is performed. Generally this ritual is performed on the day of “Dushhara” under the guidance of Pandit chanting Vedic mantras.

The reason behind stopping the boiling process during “Pitru paksh” is both ritualistic and having spiritual significance.

Research Methodology: Exploratory research method based on the observation, interview of craftsperson and video documentation of the craft ritual practiced in the Ummedpura-Tarapur village.

Ummedpura – Tarapur villages in Jawad tehsil of Neemuch district in Madhya Pradesh was once a textile cluster of traditional Nandna hand block printing. Locals say almost the entire village consisting of more than 100 families were directly involved in the craft of traditional hand block printing technique known as Nandna hand block printing. Today limited to just two families involved in this craft tradition. These two families belonging to the Hindu Chippa community traces its lineage to Sant Namdevji and follow the Vaishnava tradition. Sukhanand, a place where Muni Sukhdev (Shukdev) did penance for many years situated 12 kilometers away from the Ummedpura-Tarapur village. It is a religious place where ancient Mahadev temple was constructed.

(Chattopadhyay, K, 1976) discussed the different motifs used in the unique process of Nandna hand block printing practiced in Ummedpura and Tarapur village. These motifs were used in printing Ghaghra (Skirt) for Bhil tribe women. The motif used in the printing were inspired from floral designs and size used from small buti (small flower shape) to big buta (big flower shape).

These families not only follow the traditional methods of printing on textiles but also follow the age-old traditions and rituals set by their ancestors.

(Kramrisch,1958) reported the importance of tradition carried forward by Hindu artisan community to impart the knowledge and skill from generation to generation attributed to the God Brahma or Vishwakarma and termed as “The sum total of creative consciousness”.

In India hand block printing craft is practiced more than 4500 years considered one of the oldest known art of decorating textiles specially on cotton (Ronald, 2007).  India has a rich history and tradition of art, craft, textiles, literature and architecture. Hindu (Indian) civilization is full of diversity, rich culture and inherited with the tradition of preparing various handicrafts from artisans of rural India since many centuries considered as one of the ancient civilization in the world (Kumar & Kaptan, 2006).

India has a rich tradition of making handcrafted textiles and non-textile artifacts since many centuries. In epic like Ramayan there is a mention of Bhagwan Vishwakarma as a creator of world and father of Nal. Nal got the knowledge of “shilpkala” (knowledge of craft and art) from his father Bhagwan Vishwakarma. Nal created bridge on the ocean to reach Srilanka today known as “Ramsetu”.

(Mohanty B.C., et al 1987) has done an extensive research on various natural dyeing processes related to traditional handcrafted textile and weaving practiced in India but didn’t report any ritual or cultural linkages with the Hindu tradition.

(Mahapatra, N.N., 2016) mentioned the importance of sari and dhoti in Indian tradition and Hindu belief of wearing stitched clothing as impure.

(Chishti & Jain, 2011) reported the use of hand painted textiles in rituals of Hindu, Jain and Baudhha religious tradition.

(Singh & Chishti, 2010) documented the different traditional and contemporary sari draping and weaving styles from 14 states of India. Found sari as a heritage textile reflecting the spirit of Indian tradition and one can see India through its wide variety of sari draping styles.

(Skidmore, 2009) documented about the Hindu block printer community known as “Namdev Chippa Community” of Sanganer that the art of block printing learnt from the Sant Namdev who himself learnt from God during dream. For Hindu Chippa community of Sanganer block printing is not just an art but a matter of religious devotion too. In “Naamavali” textile tradition, printing of Hindu symbols including both “Shaiv” & “Vaishnava” tradition printed on clothes along with shlokas or mantra or God’s name on dupatta (Shawl). Sometimes their block print designs were inspired from the architecture of the temples to print on the clothes.

(Rao, et al 1994) describes that ‘In India influence of handicrafts is significant on the lifestyle of people including culture, life style and religion.’ He further emphasized that artisan tradition in India linked up with the Hindu religion.

Vishwakarma, the Hindu god is considered the father figure of thousand craft techniques, arts and architecture. Traditional Hindu craft community traces their lineage with the Bhagwan Vishwakarma and believes that their castes originated from him only.

Apart from the above literature references we have studied few more available literature related to the Indian craft, art and textiles but didn’t find much about the Hindu artisanal or craft traditions. Apart from this, we also have not found any reference or reporting about the documentation of a particular Hindu ritual practiced by craftsmen, artisan community.

Objectives of the Study

In this study we have adopted exploratory case study method to report the unique rituals and an age old tradition of “Bhatti Pujan” practiced in the Ummedpura – Tarapur village by traditional Namdev Chippa community. Case study is a qualitative research method used to report the incident based on the interviews, focused group discussions and observations. We have adopted observation and interview method.

Data Collection: Data collected using both primary and secondary sources. For primary data collection we have conducted interviews using open ended unstructured interviews to collect the information about the ritual and its significance. We have observed and documented the ritual of “Bhatti Pujan” using videography and photography. For secondary data collection we have referred the various books, journals, monographs and research articles.

Apart from Ummedpura – Tarapur in Madhya Pradesh, other clusters in Rajasthan are Akola and Bagru, where similar block printing process is followed and extended community of Hindu Namdev Chippa community lives.

We conducted telephonic interview of same generation block printers, each from Akola, Bagru and Ummedpura – Tarapur using both closed and open ended questionnaire.  This activity helped us to understand the rituals and tradition followed by them and its significance. The result shown below: 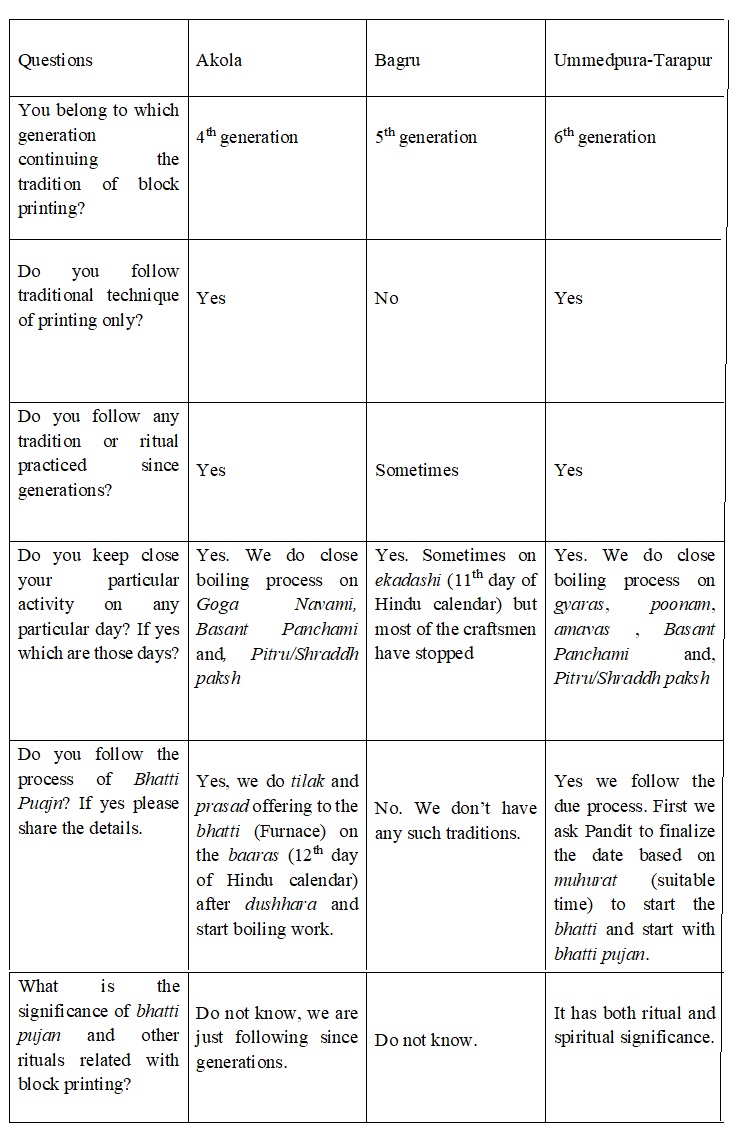 This comparative study shows that bhatti pujan is also performed in Akola, Rajasthan but they do not follow in a dedicated ritualistic manner as done in Ummedpura-Tarapur village.

As per the oral tradition craft of hand block printing practiced in the Ummedpura and Tarapur village of Madhya Pradesh practiced since more than 400 years.

In Ummedpura village, two young brothers Shri Banwari Jhariya and Pawan Jhariya known as Jhariya brothers belongs to the 6th generation of Namdev Chippa community continuing the craft of hand block printing. Both the brothers are firm believer of following the complete craft process (Please refer the Annexure-I) and tradition without compromising. As per the tradition they do not perform boiling process on every gyaras (11th date as per Hindu calendar), amavas (New moon day) and poonam (Full moon day).

Another interesting ritual they followed “Bhatti Pujan”(Furnace worship), which is performed when “Pitru Paksh” (Days dedicated to ancestors) was over. From the 1st day of 15 days of pitru paksh block printers of Ummedpura – Tarapur village stopped work related to furnace. Printing work continued but dyeing process stopped where boiling required.

After Pitru paksh was over they consulted with Pandit for muhurat (Suitable time) to start boiling process for dyeing printed textiles, a ritual known as “Bhatti Pujan” is performed. Generally this ritual is performed on the day of “Dushhara” under the guidance of Pandit. They use haldi-kumkum and flowers to worship the furnace, then Pandit started chanting Vedic mantras. Also they do worship of wooden blocks and other instruments used in printing work. As per the Jhariya borthers this ritual is as old as the craft of block printing started in the village. They learnt to follow this ritual and tradition from their father who in turn learnt from his father and so on, continuing this oral tradition of bhatti pujan.

The reason behind stopping the boiling process during “Pitru paksh” is both ritualistic and has spiritual significance. As a ritual it is practiced since ages to give a tribute to the insects and other small animals losing their lives during igniting fire to start boiling process in furnace. Spiritually this is the time when person spiritually connects with the ancestors and remember their contributions to the society and in their lives.

Traditions and rituals play a very important role in Hinduism, to bring discipline in life and continuing on the path of spirituality. It also helps us to bring peace of mind from the daily routine of life full of stress.

Living tradition of bhatti pujan performed in the Ummedpura – Tarapur shows that it helps the craftsman’s family to continue with the traditional process of hand block printing while also connecting them with their ancestors and their ancestral tradition. Performing of the ritual and tradition helped them to follow the discipline strictly and with uninterrupted tradition since many generations. Continuing of the tradition and rituals also helping them to continue with the purity of craftsmanship for which their cluster is known and famous for.

This ritual also helped them to purify their soul from the sin of jeev hatya (Murder of living thing). During igniting the furnace in this process, small insects get killed unintentionally due to burning of wood. This ritual of 15 days of stopping the furnace boiling process is a tribute to the small insects (jiva) that were killed in the process unintentionally and connects them spiritually with both their ancestors and their profession.

This ritual performed only in Ummedpura-Tarapur can also be promoted as a religious tourism to the target segment. 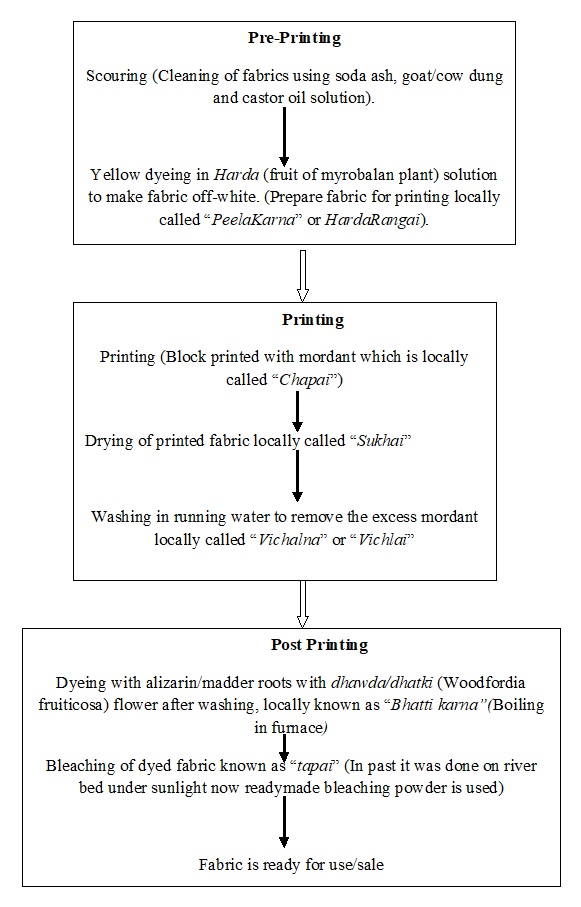 Sources: Based on primary research 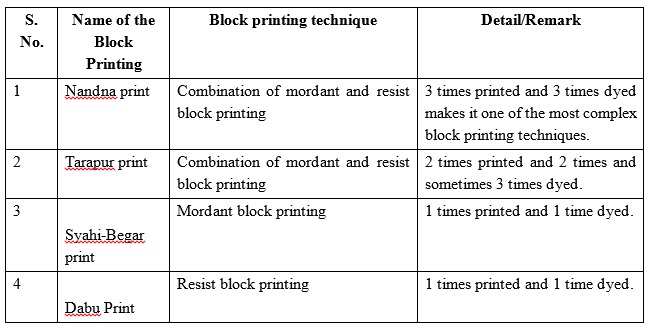 Source: Based on primary research 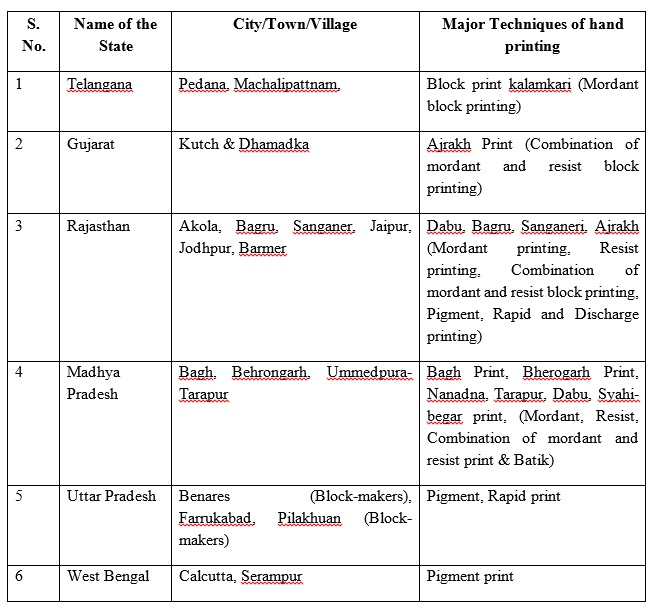 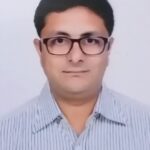 Pushyamitra is a first generation craft entrepreneur and eco print artist. Prior to start venturing into rural handicrafts business he has gained experience in marketingRead more