Want To Fly With The Meaning Of Sanskrit Verses? Grammar Is The key 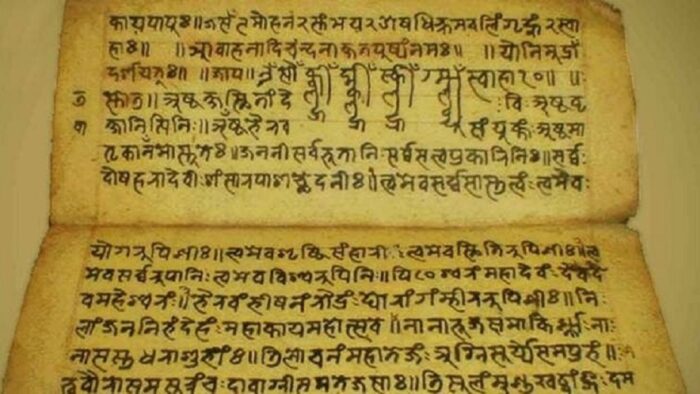 Worship Govinda O fool; When the death (Kala) is near, chanting ‘डुकृञ्करणे’’ won’t protect you. [डुकृञ्करणे refers to a grammar rule of dhatupaaTha which indicates the verb-root (dhatu) and where it is used (in this case, in Karana or ‘doing’)]

The above is the first verse of the famous Bhajagovindam, attributed to Jagadguru Sri. Adi Shankaracharya, wherein he is supposedly advising an elderly person to not waste the little time left in life on learning grammar. This verse is often used to suggest that grammar and by implication study of shastras is not needed to attain spiritual emancipation.

But, does the verse really indicate that the Acharya is putting down grammar? Does it really mean grammar and study of scripture has no place in spiritual pursuit?

A closer look at the place accorded to grammar in the study of scriptures is helpful in this context.

VyAkaraNa, or Sanskrit Grammar is one of the 6 limbs of Vedas called the Vedangas (Nirukta, Jyotisha, Shiksha, Kalpa and Chandas being the other five) and is considered an important auxiliary subject in the study of Vedas. While Vyakarana deals with the correct form of a word, Nirukta is concerned with proper meaning of a word in the context. Vyakarana is considered a pre-requisite for learning Nirukta.

Sanskrit grammarians have preserved the knowledge of sound and structure of the language right from the times of Panini. Even at times when Sanskrit as a spoken language was not thriving, the knowledge transmitted by these masters meant that nothing was lost (mostly).

The one who analyzes the spoken word(the grammarian) and the one who examines and explains the rituals (mimamsaka/epistemologist), they purify an assembly.

There is another saying that Nyaya Shastra propunded by Maharshi KaNAda and pANineeyam – Vyakarana propounded by pANini are considered helpful in the study of all Shastras (काणादं पाणिनीयं च सर्वशास्त्रोपकारकं). While it’s widely accepted that the study of Shastras is a very niche area and confined to scholars, VyAkaraNa is invaluable in study of all Sanskrit literature.

This benedictory shloka of Kalidasa from his Raghuvamsham says Parameshwara and Parvati are inseparable like word and its meaning. Vowels are also considered to be Shakti/Prakriti and consonants as Purusha.

In Aitareya Aranyaka [1], vowels are compared to Atma/consciousness and consonants to body.

The same concept is seen in Tamil language too. Uyir (life) and Mei (body) are the terms for vowels and consonants.

In Kishkindha Kanda of Ramayana, Hanuman meets Rama and Lakshmana for the first time and speaks to them. Rama after hearing him, says this to Lakshmana.

He has learnt grammar comprehensively. A lot has been said by him but there is not one inappropriate word in all that.

This verse is from Sundara Kanda when Hanuman finally sees Sita.

Hanuman decided with difficulty that the one with no decorations was Sita just like understanding a word that changed its meaning due to lack of Samskara.

Commentators have mentioned that Samskara in this case comes from knowledge of grammar [2].

Patanjali in his Mahabhashya says

When a mantra is mispronounced either in Swaras or letters, it is wrongly used (mithyA prayuktah) and that becomes a verbal thunderbolt and causes damage to the one who is chanting it. Just as it happened with chanting of ‘Indrashatru’.

The above verse is referring to a famous incident of Tvashtaa doing a Vedic ritual. He was chanting ‘Indrashatruh Vardhaswa’ seeking a son who can slay Indra. But the syllables in the word ‘Indra’ was chanted using wrong Swara (accent which in this case was udAtta), but to get the meaning of Indra’s slayer (Tatpurusha samAsa) he had to chant the syllables in the word Shatru with udaatta.

Due to this wrong usage, an opposite meaning came into being which meant ‘the one whose slayer is Indra’ (called bahuvrIhi samAsa in Sanskrit). So a son was born to him, who was killed by Indra.

While going through this on the internet, it was interesting to see that this saying was quoted in a High Court judgment as well.

Similarly, LokanAtha can mean ‘lord of the world’ (Tatpurusha) and also ‘one whose lord is the world’ (bahuvrIhi compound) and this can be known by understanding the context and by pronouncing the word the correct way with the right Swaras.

Bhartrhari in his Vakyapadiya [3], which is one of the foremost texts on grammar explains its importance in greater detail. He positions grammar not just as a set of rules, but as linguistic analysis, the universal science of sound, and as a philosophy in itself. Here are a few verses out of many that showcase the exalted place given to grammar.

This is the first rung of the ladder towards Siddhi. This is the straight and royal way to attain liberation.

Back to the verse

Coming back to the Shloka in Bhajagovindam, knowledge of grammar helps to get to the meaning of this verse, which is seemingly saying that grammar doesn’t protect you, since, the meaning can only be derived by analyzing these individual components and then piecing them together as a whole. If the phrase ‘samprApte sannihite kAle’ is removed, misinterpretations can easily come in.

Vedanta is the one school of philosophy that is well studied even today. Though not as a Shastra, many undertake lessons in the basic PrakaraNa granthas (primers) and texts like Srimad Bhagavadgita. This is largely due to the efforts of philosophers like Adi Shankaracharya, who firmly established Vedanta as the supreme philosophy.

It rightly became the ‘Upeya’ (the aim or goal) or ‘ sAdhya’ and all other Shastras became the ‘UpAyas’(approaches) or Sadhanas. In the above Shloka, wasn’t the author warning against not getting ‘stuck’ with the Upayas as it’s not unusual to get carried away with the ‘intellectual’ pursuits of a Shastra? Isn’t he hinting that one should not get deluded into thinking ‘means’ as the ‘end’ and focus on ‘Bhakti’, which can lead to liberation?

A person may know the meaning just by reading a translation of this well-known verse, but the translator himself must have gone through this process. Vedantic texts like the Upanishads and Bhagavadgita, the Puranas and much of Sanskrit literature (Kavyas etc.) being in verse, being conversant in basic grammar is vital for understanding and more importantly ‘to not misunderstand’.

If one wants to fly away with melody, message and meaning of a Vedantic verse or any Sanskrit verse, basic knowledge of grammar is as vital as the take-off velocity needed for that flight. But it’s just that, since the journey only begins there.

With inputs from Sri. Raghavendra Hebbalalu