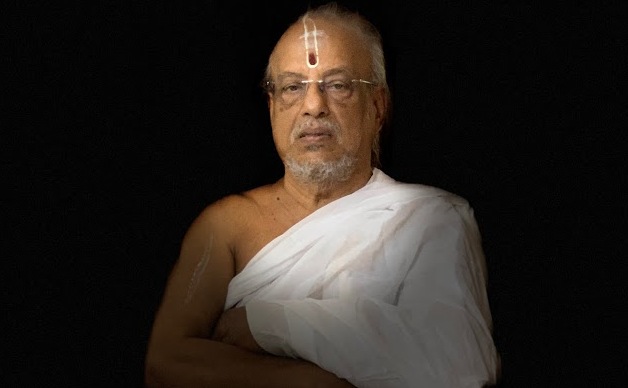 Born in 1946 to the pious couple Late Sri D.H. Ranganatha Iyer and Late Srimathi Meenakshi Ammal, Sri Venkatrama Ghanapatigal was the second of 5 children. The family hails from the hamlet Dalapathisamudram in Nanguneri tehsil of Tirunelveli district, Tamil Nadu, about 40 kilometers from the town of Tirunelveli.

Like any other young lad, Sri Venkatrama Ghanapatigal studied at the local school in Dalapathisamudram till standard V. After initiation into brahmacharyam, Sri Venkatrama Ghanapatigal was admitted to the Veda Patashaala at Tiruvidaimarudur (a village about 15 kilometres from the town of Kumbakonam) in Tamil Nadu, under the tutelage of Late Sri C Srinivasa Sastrigal, the great Yajur Veda vidwan and teacher.

Observing gurukula vaasam – a tradition where the student lives along with the Guru and the Guru’s family, Ghanapatigal Mama stood first all through his student life at the Patashaala, mastering Krishna Yajur Veda.

The Vedas are usually recited in one of four forms or variants – Samhita Parayana, Krama Parayana, Jata Parayana, Ghana Parayana. The progression of a vidyarthi’s studies is in this order – one graduates first as an expert in Krama recitation and then progresses to Jata and Ghana forms. Ghana Parayana is the most complicated form of recitation.

The magnificence of a Ghana Parayana cannot be explained in words. The vibrations possess cosmic capabilities and when recited with the right pronunciation and intonation, the experience is transcendental. Ghanapatigal or Ghanapati is the reverential title bestowed upon Vedic scholars who have mastered this form of recitation.

Sri Venkatrama Ghanapatigal joined the Patashaala at Kanchipuram to master Krishna Yajur Veda in the “Ghana” form. Under the guidance of another giant, Late Sri Ramaswami Sarma, Ghanapatigal Mama acquired mastery over this form of recitation.

He also pursued the study of Lakshana. He faced the tough examinations of Kanchi Kamakoti Peetam, Sringeri Sharadambal Peetam and Tirumala Tirupati Devasthanam (TTD). Needless to say, he stood first in the examinations and was conferred the title “Salakshana Ghanapati” by all the three institutions.

After Ghanapatigal Mama completed the studies, the Kanchi Kamakoti Peetam and Sringeri Sharadambal Peetam conferred the title “Veda Bhashya Ratnam” on him.

Sri Venkatrama Ghanapatigal served as the Acharya-in-charge at the Tirumala Tirupati Vidyakendra, Tirupati for four years. He has been a regular external expert advising and consulting TTD for recruitment of veda parayandhars, external examiner for the veda parikshas, and has participated as well as conducted several Veda Sadas’ for TTD. 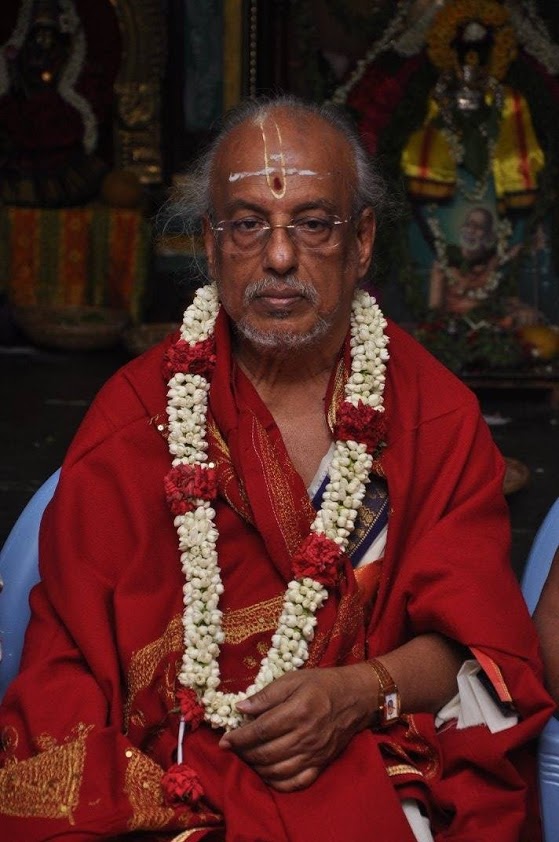 He convinced TTD to issue a monthly stipend to Vedic scholars, a beneficial scheme that has helped the cause of Veda Rakshanam. He has been a very active EC member on TTD board for more than a decade.

An association with the citizens of the twin cities had begun. With this local support and with the benign blessings of Sri Paramacharya, the Shankara Gurukula Veda Patashaala was started in 1984. What started at home with 3 students, grew with his devotion, dedication and diligence to “Veda Bhavan”, a magnificent institution gaining respect and appreciation across the Dharmic landscape.

Hundreds of Veda Vidyarthis graduate from this Patashaala every year after mastering their respective ‘shakhas’ (branches) of either Rig, Yajur, or Sama. Many students from other patashaalas come over for training and mastery under his astute scholarship. Several young scholars have completed their studies upto “ghana” stage under his tutelage.

They continue to uphold the tradition of “Veda Rakshnam” as employees of various institutions, or as independent Adhyapakas, if they set up their own Patashaalas. The excellence and highest standards set by Sri Venkatrama Ghanapatigal have created benchmarks for Vedic education.

He ensured that vidyarthis were pampered with the best of food – nutrition, and taste uncompromised. They celebrated every festival with so much joy, gaiety, and vigor, it was hard to remember home. The vidyarthis had the best quality clothes, sweets, care, and concern that they could have ever imagined.

Sri Venkatrama Ghanapatigal was their mother, father, brother, and God. He knew everyone by name and personally ensured that they were well taken care of. If it was Deepavali, he would ensure that they had a good oil bath, wore new clothes, and burst firecrackers.

All this, while he instilled in the vidyarthis the regimen of a Brahmachari. Waking up early every morning, rigorous practice sessions through the day, continuous evaluation tests and competitions, strict discipline, exposure, and experience in organizing social events, practicing empathy with elderly and feeble devotees – made them what they are today.

Students were also imparted intense devotion and love for the country. Not an Independence Day or a Republic Day passed without the national flag hoisting and group singing of the national anthem. It was always followed by a group chanting from the Vedas for the country’s good health and safety.

This all-round excellence of students of Veda Bhavan of Hyderabad has now become the benchmark for education across the Patashaalas in India. Across India, if one mentions that he has observed his Gurukulavasam at Veda Bhavan, Hyderabad there is a good chance that he will be respected, if not revered.

As a Guru and Spiritual Advisor, Sri Venkatrama Ghanapatigal was the epitome of benevolence, deeply invested in the spiritual growth of the community, society, and country. He embraced and welcomed change, and adapted to new and improved ways of managing and running the Patashaala at all times. 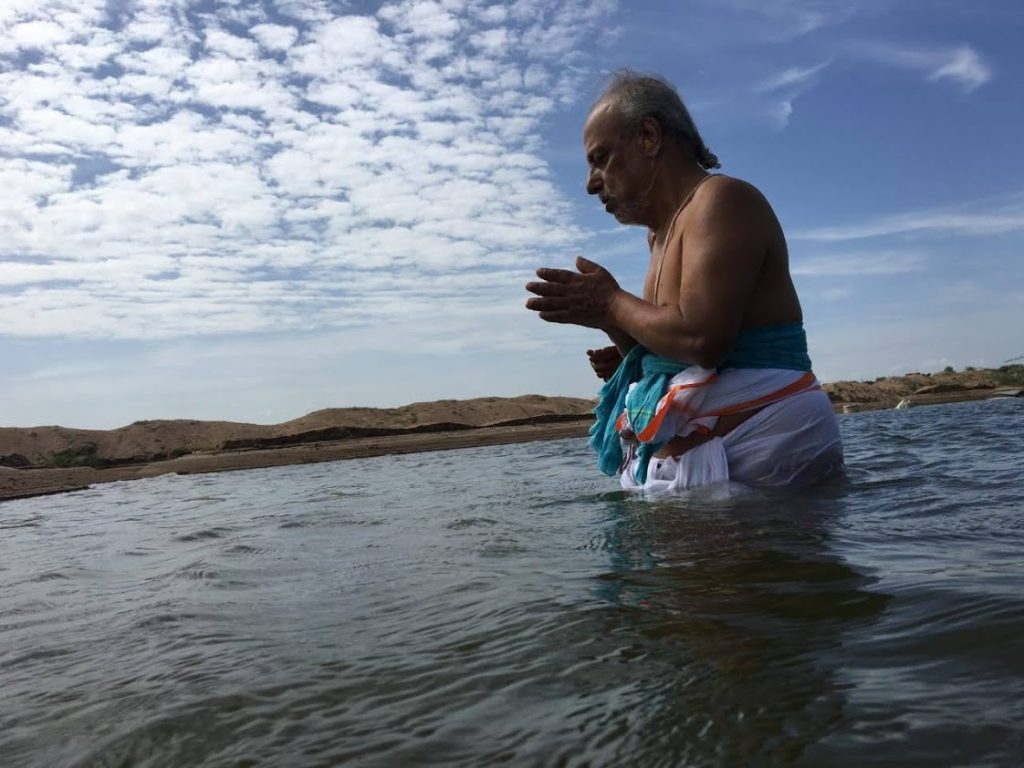 Whether it was ensuring a healthy environment with spotless hygiene, nutritious meals for the students, medical care on-call, or using technology effectively for the benefit of Veda Rakshnam, Sri Venkatrama Ghanapatigal was always at the forefront of delivering the best service to humanity. All the employees of the Patashaala, from the janitor to the Managing trustees entrusted their well-being in the hands of Sri Venkatrama Ghanapatigal.

He did not fail them. All of them have been with the institution since its inception, and lovingly dedicated themselves to the cause Sri Venkatrama Ghanapatigal endearingly espoused. All students have been provided with a government ID – a mandatory need for every adult citizen with Sri Venkatrama Ghanapatigal petitioning this need with the Government.

The Shankara Bhakta Sabha was led by Sri Venkatrama Ghanapatigal for almost 4 decades in the service of Loka Kshemam. The many events conducted were impressive in not just their scale but also in the participation of Vedic scholars of the highest order.

From the annual Sri Adi Shankaracharya Jayanthi to the many Sahasra Chandi, Athi Rudram, Maharudram, Veda Parayanams, Navaratri Utsavams, Srimad Ramayana Navahams, Srimad Bhagavatha Saptahams, Sampradaya Bhajana and many more, devotees had the opportunity to experience the magnificence of our Vedic texts and joyousness of traditional celebrations at their undiluted best. All these events were supplications from the bottom of the heart for a happy, healthy, and prosperous country and her citizens.

While India was staring at the pandemic (Covid-19) that halted the entire world on its feet, and when China aggressively made territorial claims in the union territory of Ladakh, silent prayers were organized by Sri Venkatrama Ghanapatigal for India to come out of both calamities unscathed. In the past, when natural calamities caused disastrous havoc to India and its citizens, prayers were held for India’s well-being.

Sri Venkatrama Ghanapatigal participated in all of them with child-like enthusiasm. He was bestowed by Veda Maata with a wonderfully deep metallic voice. His ghana recitation was always a devotional, heavenly, and delightful experience for listeners and fellow reciters.

Sri Venkatrama Ghanapatigal brought to the forefront, a far-reaching vision, astute administrative skills, an inclusive approach, tolerant leadership, uncompromising excellence, transparent accountability, conscientious utilization of resources and embracing the best that modern technology could affordably offer. His considering of the Trustees from other walks of life was of utmost humility, regard, and respect.

An exalted teacher, a Guru par excellence, Sri Venkatrama Ghanapatigal was ever the curious student. He strove to understand, appreciate, and adopt prudent processes for the effective administration of the Sabha. He would value every suggestion and discuss it with the eagerness to implement within the shortest possible time.

A true humanitarian is a natural leader. Humanitarians are normal persons like any of us. The difference lies in the effort and commitment of the individual to work extraordinarily and inspire others to do so too. Their effort is not only consistent but with a great sense of goodness.

There have been many humanitarians in this world. Sri Venkatrama Ghanapatigal was part of this extraordinary group, an epitome of benevolence, who strove tirelessly through his activities for the spiritual and material well-being of society and citizens. People from all walks of life turned to Sri Venkatrama Ghanapatigal for advice, for his blessings, and for solace. 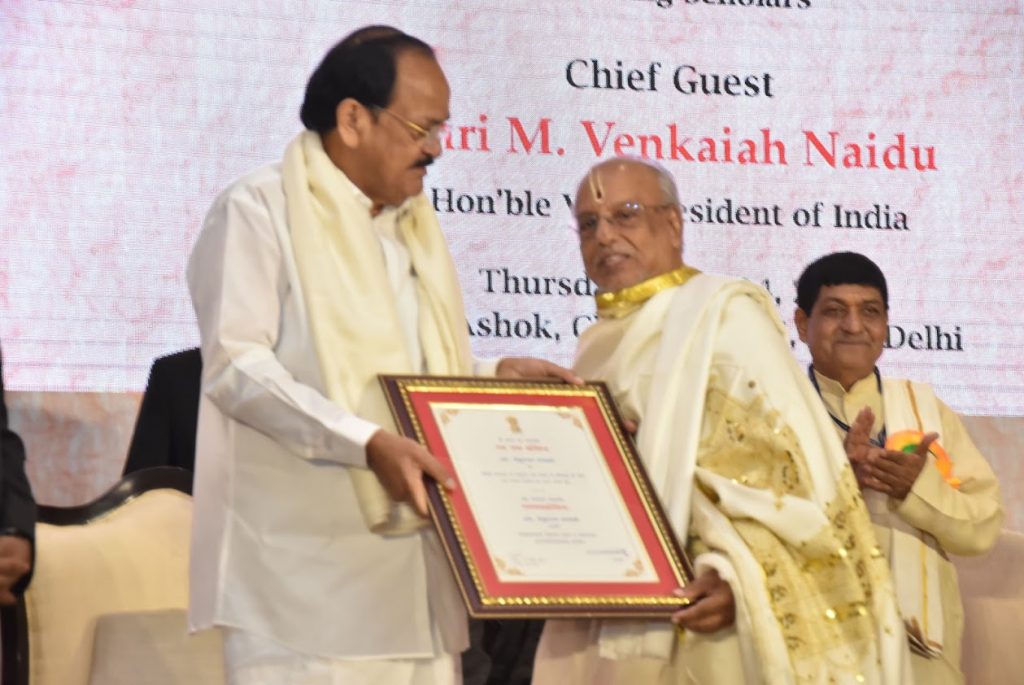 He was everybody’s spiritual Guru. Nobody would be turned away without their asks being fulfilled. He supported all who came to him to the best of his abilities. It was a moment of intense pride when Sri Venkatrama Ghanapatigal received the President’s Award last year for his services built on the foundation of Vedic traditions.

Sri Venkatrama Ghanapatigal’s sudden demise on the 10th July 2020, at Hyderabad, is a colossal loss to the world. We humbly pray to the Lord, to the benevolent Acharyas, and to him, our Guru, to give us the strength to continue to implement and execute the unfulfilled commands with his sookshma presence, guidance, blessings, and grace.

Arun Subramanian is an independent advisor working with multiple start-ups and angel investors, providing them with strategic consulting for product development and business process efficiencyRead more