Unknown Tales from the Puranas- From Brahmaloka to Varanasi via Kanchi: Bhairava in the Brahmandapurana 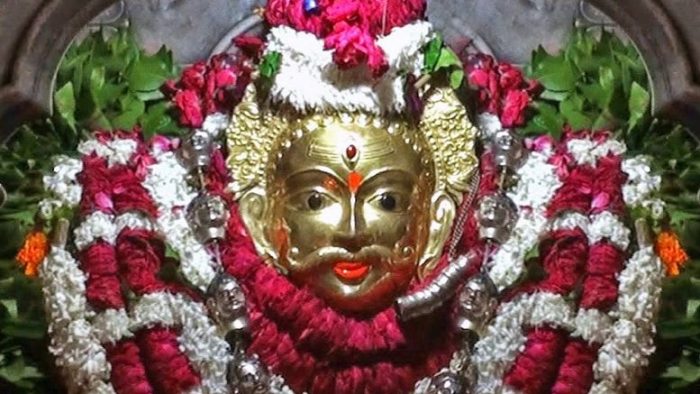 (This is the first article of our new series titled ‘Unknown Tales from the Puranas’. There are myriad stories from puranas and upapuranas that are hardly known to most of us. The series will cover such lesser known tales, as well as unknown versions of the popular tales from pauranika sources. The series opens with one such story, about the purnavatara of Shiva: Bhairava.)

The most famous paurāṇika story associated with Bhairava is of him beheading Brahma, and how the sin of brahmahatyā was washed off at the Kapālamocana Tīrtha in Varanasi. But, many purāṇas give interesting twists to this tale.  Brahmāṇḍapurāṇa, for example, associates this story to the prominence of Kāñcī.

In the assembly of Brahmā, sages and others were constantly confused between Brahmā and Śiva, as they both were five-headed. द्वयोः पञ्चमुखत्वेन भेदं न विविदुस्तदा, says Brahmāṇḍapurāṇa II.40.48. When Śiva disappeared from the scene, Brahmā and Viṣṇu started fighting amongst themselves for the supremacy amongst gods. It was then that Śiva appeared in between the fighting duo, in a blazing pillar of fire. He was looked down upon by Brahmā. This infuriated Śiva and he glanced at Viṣṇu with fury and vikāra. From that glance was born Bhairava. विष्णुमेवं तदालोक्य क्रोधेनैव विकारतः।। तयोरेव समुत्पन्नो भैरवः क्रोधसंयुतः॥ says Brahmāṇḍapurāṇa II. 40. 55cd-56ab. Bhairava then swiftly cut off the fifth head of Brahmā, resulting in brahmahatyā. The skull was therefore, left stuck to the nail of Bhairava.

The story now takes a completely different turn. Bhairava, inflicted with the ghastly sin of Brahminicide, started wandering in various pilgrim places and holy water-bodies to rid himself of that sin, all in vain. Ultimately he reached the holy city of Kāñcī. He stayed there worshipping the presiding goddess of the city, Kāmākṣī for a long time, living on alms. When he reached the Śrībhāva, Śrīdevī Kāmākṣī was pleased with him.

She appeared to him in his dream, stating that he was the destroyer of sins himself, identical with her, and therefore did not need such austerities. She declared that he was freed from the sin of Brahminicide. However, Bhairava was not able to rid himself of the skull the following day in spite of bathing in the holy Pañcamahātīrtha and offering daily worship.

He became confused if the dream was real or just his hallucination. The Goddess then re-instructed him to bathe in the holy pond at the site. Though he was still unsure, Bhairava took a dip into the holy water in Kāñcī, to resurface from Gaṅgā in Vārāṇasī. निममज्ज सरस्यां तु गङ्गायां पुनरुत्थितः॥ Says Brahmāṇḍapurāṇa II.40.79cd

Bhairava was utterly confused with this sudden turn of events. But, as he entered the city to seek alms, he met a lady with the exact same appearance as Kāmākṣī herself. She offered him jyotirmayī bhikṣā, which at once released the skull from his hand. He then returned to his abode praising the greatness of the goddess, and the city of Kāñcī. पुरी काञ्ची पुरी पुण्या नदी कंपा नदी परा । देवता सैव कामाक्षीत्यासीत्संभावना पुरः ॥ says Brahmāṇḍapurāṇa.

The myth is clearly tailored to incorporate strong śākta currents. Significance of the city of Kāñcī and prominence of the presiding goddess Kāmākṣī are highlighted perfectly. The dedication and sincerity of Bhairava in her worship is underlined repeatedly, indicating the superiority of the Goddess.

It is fascinating to see how the myth incorporates the unavoidable reference to Kāśī, while maintaining the authority of Kāñcī. Equating a newer place of pilgrimage to the older and more famous one, is one the most common instruments used by the purāṇas to popularize new places of pilgrimage. This not only ensures public acceptance to the newer place of worship, but also guarantees a continued glory to the ancient one.

The role of Viṣṇu in this process is also interesting. It is noteworthy that here in Brahmāṇḍapurāṇa and in a folk tale cited by R. C. Dhere in his seminal work Karavīranivāsinī Śrīmahālakṣmī, Viṣṇu is said to be instrumental in the creation of Bhairava. Dhere states how Bhairava is in fact Hari-Hara-Putra; born from Śiva and Viṣṇu Mohinī. In the myth of Mārtaṇḍa Bhairava/ Khaṇḍobā and his first wife Mhāḷasā, the imagery of Mohinī is used again.

It is a popular belief that Mhāḷasā is the incarnation of Mohinī (who herself is an incarnation; serves to prove the popularity of the idea). When Śiva was infatuated with the beauty of Viṣṇu in his Mohinī form at the time of Amṛtamanthana episode, (s)he promised to be his partner in the incarnation of Mārtaṇḍa Bhairava. Accordingly, (s)he assumed the form of Mhāḷasā.

Bhairava’s relationship with the Goddess is multifold. He at times, is her protector, at times her overlord or consort, at times her son, and here, her devotee. It is fascinating how various panthas intermingle in the paurāṇika myths and theology to create newer ones. Analyzing such lesser known tales is indeed, studying miniature replicas of Hinduism!

(Read the next article in the series here.)