Unknown Tales from the Puranas: Narasimha Story without Prahlada 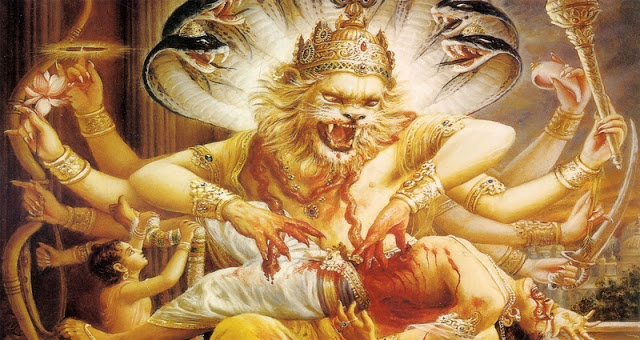 (This is the fourth article of the series titled ‘Unknown Tales from the Puranas’. There are myriad stories from puranas and upapuranas that are hardly known to most of us. The series will cover such lesser known tales, as well as unknown versions of the popular tales from pauranika sources. Read the earlier story here. The present story narrates the myth of Narasimha incarnation as found in Brahmandapurana.)

The ancient Indian canons including Vedas and Purāṇas are preserved since millennia only through oral transmission. However, the preservation of Vedas is verbatim; which is why through the entire length and breadth of the Indian subcontinent, the Vedas are identical. No alteration even in the syllables or accents was permitted.

This is not the case with Purāṇas. They were constantly updated and localized as per the target audience, and the requirements of time and situation. Such alterations were not just permitted, but rather encouraged. Hence, we see versions and variations of the same tale in different purāṇas, at times even within the same purāṇa.

Usually in such cases, the most embroidered and elaborate take on a tale becomes famous, shadowing the mono-myths or stages of its growth. A wonderful example of the same is the Narasiṁha myth. The story known to most of us involves a young Viṣṇu devotee son Prahlāda, who is harassed by Hiraṇyakaśipu, the non-believer demon father. Viṣṇu appears through a pillar in half-man, half-lion form to save the devotee. This version is found in Padmapurāṇa[1], Skandapurāṇa[2], Viṣṇupurāṇa[3], Bhāgavatapurāṇa[4], and Narasiṁhapurāṇa[5].

If we scan the other purāṇas, we have many different versions. Though Saurapurāṇa[6], Kūrmapurāṇa[7], and Śivapurāṇa[8] include Prahlāda; he is a grown-up man, who initially fights the battle with Narasiṁha before ultimately understanding his divinity. Entry of Prahlāda basically symbolizes introduction of Bhakti. Here’s a story from Brahmāṇḍapurāṇa which does not involve Prahlāda at all!

Brahmāṇḍapurāṇa[9] starts the narration of the myth with the story behind the name Hiraṇyakaśipu. He was the son of sage Kaśyapa and Diti, born on the day of Soma pressing of the Atirātra part of the Aśvamedha sacrifice of Kaśyapa. The infant came and sat on the golden seat prepared for the Hotṛ priest, and narrated stories, one after the other. Seeing that, sages named him Hiraṇyakaśipu. He was the elder brother of Hiraṇyākṣa and Siṁhikā, the mother of Rāhu.

Hiraṇyakaśipu fasted and meditated head down for hundreds of thousand years. When Brahmā granted him a boon, he asked for ‘immortality from all beings, supremacy over gods, men, demons and demi-gods, and inviolability by wet or dry, in day or night.’

Hiraṇyakaśipu, with this great boon became everything- sun, moon, and wind, cowherd, shepherd, and farmer. He only was the expositor of mantras, and knower of all. He alone was the initiated, and the singular performer of sacrifices. He was the only one to be worshipped, and all gods became imbibers of Soma through him.

Viṣṇu (a man-lion or lion among men), who was his death, stood aloft on the shore of the ocean, by means of his penance. The body of the lord was that of all the gods. This mighty deity was called Sudarśana. During a hand-to-hand fight, he killed Hiraṇyakaśipu with his own nails, as they are neither wet, nor dry.

Noteworthy features here are many! The story of Hiraṇyakaśipu’s birth is fascinating, with a divine touch. It seems only natural for such a fantastic divine being to aspire for great things like sarvadevatva and sarvāmaratva.

No actual reason of the penance of Hiraṇyakaśipu is mentioned. So also is the reason behind asking for such boons. Also, Brahmā seems to immediately agree to the boon of immortality, which is usually not the case in puranic boons.

We also see the introduction of the famous ‘neither-nor pacts’ in the boon, which are not found in Agnipurāṇa[10] and Vāyupurāṇa[11] versions. Also, a vague use of the loophole in the boon is made.[12] The Vedic antecedent of these is the myth of Indra and Namucī. We have two stories in the Brāhmaṇa literature.

Śatapatha Brāhmaṇa narrates the story of Namucī, who had received a boon very similar to the boon given to Hiraṇyakaśipu. He could not be killed by a weapon wet or dry, neither in day nor at night, etc. Indra killed him with his Vajra formed by the foam of ocean, thus nullifying all the semantic clauses of the boon.[13]

Taittirīya Brāhmaṇa gives a slightly different version, wherein Namucī had earlier pardoned Indra in a battle, on the condition that Indra would not kill him with a weapon wet or dry, neither in daytime nor at night. Indra cheated on him, and killed him with the foam in the evening.[14] Use of these clauses is found in the Brahmāṇḍapurāṇa version. Even, the Narasiṁha here is stated to be aloft on the shore of the ocean, which probably comes from the use of ocean foam in the Vedic tale.

Hiraṇyakaśipu does not become tyrant, per say, like his image in the famous version. He only seems to have assumed all divine roles; fulfilling the duties and expecting the rights in return. However, this goes against the rules of ṛta, which assign different tasks to different divinities. Also, Hiraṇyakaśipu becoming the sole sacrificer and recipient of soma is also against the general divine order.

The most interesting aspect is the so called Narasiṁha. The text does not state the form to be that of half man and half lion, like the common popular image. Rather, through the description it seems more like a lion among men, i.e. the best and the mightiest being.

Viṣṇu, being the lord of the sacrifice or the sacrifice himself, has to intervene and punish the guilty. This orthodox and typically Brahminical concern is carried forward in many more purāṇas to explain the reason of Viṣṇu’s enmity with Hiraṇyakaśipu. We’ll save those stories for another time!