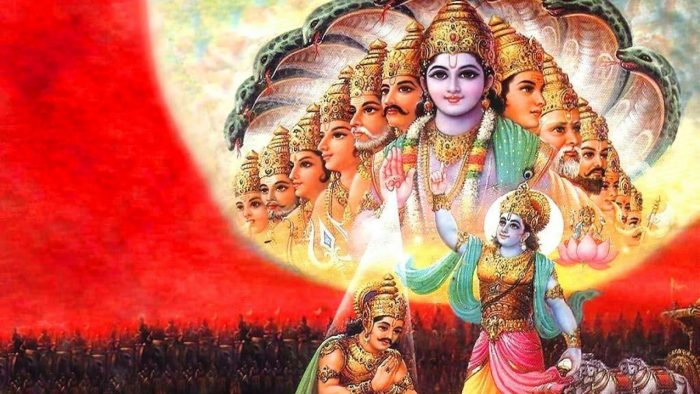 From a young age, we are told – do as Rama did and do as Krishna said. It is easy to understand Rama, and even if we cannot follow in his footsteps, we can understand what it means to live by his values and principles. It is hard to understand Krishna. With Krishna, there is no path.

While Krishna is perhaps the most popular of our devatas, he is also the most elusive. We are like the hapless gopis, chasing him into the forest wildernesses of Vraj, desperately trying to catch him. And the more we try to hold onto him, the further he slips away from our grasping fingers.

We love him without quite being able to pinpoint why. We love him in parts but are unable to digest or even comprehend the whole – we love him as the darling prankster of Vraj, the friend of the gopās, the lover of the gopīs, the consort of Radharani, the king of Dwaraka, the refuge of Draupadi and Pandavas, the deliverer of the Gita, the political mastermind behind the most apocalyptic war ever known. Many of us cannot integrate the Krishna of Vraj with the Yogeshwara Krishna of the Mahabharata; we can only love him in pieces.

We do not always remember the Krishna who burned the Khandava forest and smiled at the death of Ghatotkacha, whose ruthless approach to the war gave even Balarama, his elder brother, pause. Even as we are enchanted by the rās-līla, we are troubled knowing that he left behind Radharani and the gopīs without a second glance.

The one who demanded that the Kuru war be seen through to the end, that Yudhishthira lie about the death of Ashwatthama, that Bhima defeats Duryodhana through trickery, that Arjuna shoots at an unarmed Karna – that very Krishna was also the pragmatist who had no qualms about becoming the raṇchoḍ, the one who ran away from the battlefield, retreating from Mathura to Dwaraka after repeated attacks from Jarasandha (whom the Yadavas bested each time but could never wholly defeat).

He is indisputably our one and only sampūrṇa avatār, and yet there was no such glorious reign known as Krishna Rajya. He did not win Rukmini in a swayamvar but rather had to steal her away, and fight off her brother’s armies, marrying her in the Gandharva form of wedding. He was repeatedly insulted, and his stature as a king questioned.

He won the war for the Pandavas only by breaking the rules of combat, as he himself unapologetically admitted. Separated from his birth mother and father for years, he was once more separated from Yashoda Mata and Nanda Maharaj. Vraj, the sylvan wonderland of his childhood pastimes, was so devastated by his departure that the rivers overflowed with the tears of the gopīs in their heartbreak.

And then at the very end of his life, he witnessed the self-destruction of his Yadava clan through internecine battle and bloodshed, coming to the most inglorious of ends, fructifying the curse pronounced by the bitter defeated queen Gandhari. He died alone, bereft of the company of his family or friends, mistakenly shot by a hunter who thought his red-bottomed foot was a deer. The evening of his death ushered in the terrible Kali Yuga.

We know all these facts of Krishna’s life, but we rarely stop to truly imagine ourselves in his place. We forget the sadness in Krishna’s life because Krishna himself is ever-smiling, always in equipoise, never sad.

“It is really arduous to understand Krishna. It is easy to understand that a man should run away from the world if he wants to find peace, but it is really difficult to accept that one can find peace in the thick of the marketplace. It is understandable that a man can attain to purity of mind if he breaks away from his attachments, but it is really difficult to realize that one can remain unattached and innocent in the very midst of relationships and attachments, that one can remain calm and still live at the very center of the cyclone. There is no difficulty in accepting that the flame of a candle will remain steady and still in a place well secluded from winds and storms, but how can you believe that a candle can keep burning steadily even in the midst of raging storms and hurricanes? So it is difficult to even for those who are close to Krishna to understand him.”

I have a particular fondness for Osho’s writings on Krishna. He alone preserves the revolutionary aspect of Krishna, all the ways in which he broke the mold of what an avatār or god should be, never to be surpassed or matched again.

Coming back to Osho—

“He accepts life in all its facets, in all its climates and colors. He alone does not choose, he accepts life unconditionally. He does not shun love; being a man he does not run away from women. As one who has known and experienced God, he alone does not turn his face from war. He is full of love and compassion, and yet he has the courage to accept and fight a war. His heart is utterly nonviolent, yet he plunges into the fire and fury of violence when it becomes unavoidable. He accepts the nectar, and yet he is not afraid of poison.…

Krishna’s life … accepts no limitations. It is not bound by any rules of conduct, it is unlimited and vast. Krishna is free, limitlessly free. There is no ground he cannot tread; no point where his steps can fear and falter, no limits he cannot transcend. And this freedom, this vastness of Krishna, stems from his experience of self-knowledge. It is the ultimate fruit of his enlightenment.”

It is for this reason that Krishna is our sampūrṇa avatār. Rama was devoted to dharma; Krishna transcends dharma. He has no preferences, no fixed identity, or values. Through this infinite freedom, he bestows upon us infinite love, infinite possibility, infinite good, unconditioned, and unconditional.

We dutifully read the Bhagavad Gita and recite the Vishnu Sahasranama but squirm at the Mahabharata’s depiction of Krishna’s actions during the war, because it makes us uncomfortable.

Krishna is meant to make us uncomfortable. We get taken in by the singing and dancing, by the mischievous pranks, by that dimpled smile. But that is only at the surface. To really connect to Krishna, we need to let him take us deeper, into the forest wildernesses of Vraj, onto the battlefield of Kurukshetra.

Like the gopīs, we must keep chasing and pursuing Krishna out of love, until we are completely lost, bewildered, hopeless and helpless – it is only at that moment that we are fully open, fully ready to surrender, fully ourselves. It is at that moment that Krishna calls to us like he called the gopīs out of the water after stealing their clothes. It is only when we have given up the delusion of catching him that he catches hold of us.

Like Arjuna, we must let ourselves be rudely shaken by the wisdom of Krishna. Every time we think we have understood, we must let him pull the rug out from under our feet, not letting us hold onto any comforting illusion or delusional attachment. We must be willing to look into the true face of Krishna, a sight that even the valiant Arjuna was able to bear only for a moment.

In the midst of battle, in the midst of the hullaballoo of action and war and work, we must keep our ears open for the words of Krishna, to release our arrows at his command. We must surrender the last trace of ego before the chariots upon which we sit incinerate into the fire. When we relinquish the reins of our mind into his hands, that is the moment he gives us total freedom to exercise our will.

We cannot follow Krishna. We can only surrender unto him. Surrender. śaraṇāgati. That is the only path that will take us to him.

In Krishna is found the full expression of the ideals of the civilization of Bharat and Sanatana Dharma. Only the Hindu mind could conceive of, and accept Krishna. Only out of the fertile soil of Hinduism could Krishna emerge. So long as we stay true to the memory of Krishna, so long will Dharma be with us. So long as we preserve the spirit of Krishna within us, so long will Hinduism persist, too.

If they succeed in taking Krishna from us – those who call him a bloodthirsty genocidal god and deride him as a womanizer, one not fit to be viewed as a proper god – then they will have destroyed us. If our modernist, conditioned minds make us uncomfortable with the fullness of

Krishna, make us only accept pieces of him, then we will never live up to our full potential or take up the mantle of his legacy.

(Abandon all varieties of dharma and simply surrender unto me alone. I shall liberate you from all sinful reactions; do not fear.)