The Greatness Of The Mahiṣamardinī-Kṣetra 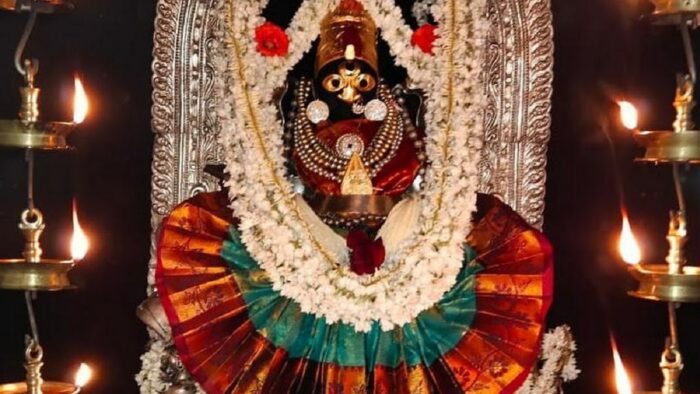 Purāṇas form an inseparable part of our Sanskrit literature. They are believed to be an understandable explanation of the message the Vedas convey, replete with wonderful stories. They make the most elusive rahasyas (secrets) comprehensible, to the ordinary reader, when contemplation begins, by evoking one’s viveka (buddhi). This very aspect makes our puranic literature special for the purpose of study. The mankind shall remain eternally indebted to Bhagavān Veda Vyāsa for having presented through the Purāṇas the avatāra-līlās, the illustrious devotees of sages, kings and devotees, the vratas, tīrthas, dharmas etc., in the most intelligible manner to harness man’s devotion and lead him to the highest human pursuit.

Of the eighteen MahāPurāṇas, the Skanda-Purāṇa is considered as a treasure-trove of kṣetra-māhātmyas (glorification of the sacred places). A Kṣetra-māhātmya or Kṣetra-mahimā or Sthala-Purāṇa as it is popularly known, is an account of the origin, history and the sanctity of sacred places and shrines. Kṣetra can be roughly explained as a sacred site. It generally denotes the ordained place where the deity resides (or is consecrated).

The Māheśvara-KhāṇDa of Skanda Purāṇa is divided into Kedara khanda and Kaumarika Khanda. Kedarakhanda is discussed here and it describes the hitherto unknown Kṣetras in the Himalayas. The part of Himalayas, which is surrounded by water-bodies (rivers, streams) is called Kedar-‘केन जलेन दीर्यत इति केदार:’

The Kedara khand Kṣetra is believed to be the abode of Śiva and Śakti, hence is revered by tapasvis and pilgrims since ancient times. This area, as per modern geography is roughly situated in the Garhwal Himalayas, from where the holy Ganga River too originates, extending southwards upto Maya Kṣetra or Haridwar of today. Almost all the dharmic works mention pilgrimage or tīrtha-yātras. Every religion recognises the value of pilgrimage, it is believed to destroy sins and purify a person. Hindu dharmik texts abound in accounts of yātras since very ancient times. They are known to exist since the Vedic era. During the Mahābhārata era such yatras assumed prominence. Pilgrimages were undertaken, as a means to worship and introspect. They are also known as tīrthas, for, they can ferry one across sins – ‘तरति पापादिकं यस्मात्’. Even the study of the greatness of a tīrtha-kṣetra, is known to confer equal benefit as, visiting a ‘Tirtha- Kṣetra’

One of those revered tīrthas is the Mahiṣaamardini sthala (tirtha) situated on Mahiṣakhand Mountain. It lies towards the south of Kedara. This Kṣetra mahatmya is expounded by Śrī Skanda to Sage Agastya in response to his plea to explain about the wonderful place where, Bhagavān Śiva and Devi Maheshwari reside[1].

Towards the south of Kedara lies a mountain named Mahiṣa-khanda. In the ancient past, the place where Mahādevi had slayed Mahiṣāsura, She threw one part of the asura’s body on this great mountain, at that very spot, the Devi Herself manifested as Mahiṣamardinī (the slayer of Mahiṣāsura). The bhakta who worships this place, is granted a place in the abode of Śiva. There itself lies, the place where MahAdev also resides, by the name of BhagavatīŚvara, by worshiping Him, a person secures a gati or state that is coveted in the three lokas. A great river flows there, famous by the name of Patumati. It bestows, among other good fortunes, the merit of performing an Ashwamedh sacrifice (yajña). To the South of this river, lies a (dhāra) waterfall, by the name of Kumbhika, it is mystical and visible, only to the very pious, it promises a place in heavens (higher realms).

Further, towards the upper part lies a famous place, known as Visnaveeshwara. This is where the all-powerful Bhagavān Vishnu had worshiped Śiva.

Even today, on this Mahiṣakhanda Mountain, sounds are heard. It is believed, Devas sport there and Apsaras (Celestial damsels) perform nritya. There also lies the most mystical cave, almost endlessly long. The great seer Vyāsa resides in that cave. A very holy river has originated from the lotus feet of Vyasa. A person, who touches this land, is said to earn manifold puṇya. To the South of this (place) is the sthala of Veda Mātā Gāyatrī Devī. Any person performing the Gayatrī-japa, for a period of 24 days here, is regarded as very fortunate and blessed with the darshan of the extremely effulgent Devī Gāyatrī! A waterfall by the name of Savitriki flows here, it grants well being (kalyana), just the darshan of which, grants one the ultimate state of Paramapada.

Thus ends with this dialogue, the awe inspiring conversation between Bhagavān Skanda and Sage Agastya. This narration is of immense spiritual value to devotees. It is a lesser known part of the vast Skanda Purāṇa that helps in understanding some rare, even elusive places, the Himalayas abound in. The belief that, Himalaya has been a tapo-bhoomi since eons, is further reinforced, when we take this virtual tour, guided by none less but Bhagavān Skanda!

‘Devi Mahiṣamardini protect us Herself’ is a humble prayer, during this auspicious festival of Śāradīya Navarātrī culminating in Dussera. Jagadamba Udayostu!