An Eulogy Of Durgā By The Vedas Personified 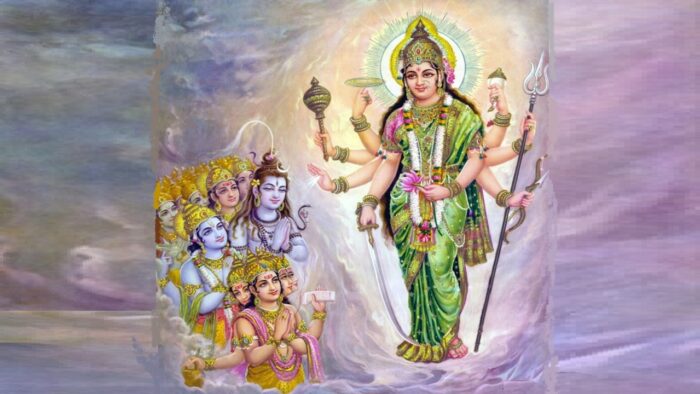 Durgā is the most worshipped and loved form of Devī Pārvatī. The Navarātri, beginning with the Hindu month of Āshvina, heralds the festivals that the bountiful sharad ṛtu (autumn) brings along; Devī appears to smile in the greenery all over, just as the harvest season begins. The Navadurgās are the nine forms of the Parmeshvarī, they are invoked and meditated upon during this festival that concludes with Vijayā Dashamī or Dasshera.

The Durgāstuti is a lesser known hymn from Mahābhāgavata Purāṇa. The Vedas are believed to have sung this praise of the Divine mother. Ādi Māyā in the form of Pārvatī is the basis of the Trinity, as we know- Brahmā, Vishnu and Rudra They also represent the three guṇas viz,. Rajas, Sattva and Tamas. The entire creation – the jagat came into existence, after the Trinity manifested. This is by the grace of the all compassionate Mother.

Once upon a time, in the pious forest of Naimishāraṇaya the wise sages had assembled, to receive enriching knowledge, from Sūta, the learned narrator of Purāṇic lores. The sages humbly requested him to kindly expound some Purāṇas, which can grant the listener, a place in celestial realms and lead to their mokṣa thereafter, by virtue of which the ordinary mortal would be blessed by the ninefold path of devotion to the Mother Goddess.

Śrī Sūta replied that the very secretive Purāṇa is known by the name of Mahā-bhāgavata. Further arousing the inquisitiveness of the sages, Śrī Sūta stated that it was first expounded to Devarṣi Nārada by Śrī Śiva and was later given by Veda Vyāsa, to the devoted sage Jaimini. In response to the enquiry of the sages, Śrī Sūta began narrating the ancient lore as:

Veda Vyāsa, the knower of all Vedas propounded the Dharma-Śāstras and composed the eighteen major Purāṇas, yet had a sense of dissatisfaction that something still needs to be known. This made him anxious. He had never come across, or heard of a Mahā-Purāṇa which solely describes, in detail, the glories of Devī Bhagavatī. Vyāsa wondered, as to how would it be possible for one to describe the caritam of the Mother Goddess, when Bhagavān Śaṅkara himself is incapable of describing her totally?

Thinking thus, Vyāsa went to the Himalayas and at an isolated place, began, with single-pointed devotion the arduous tapas (penance) for Devī Durgā. The Devī, who loves Her devotees as Her own children, was pleased and the skies echoed with a voice that ordered Vyāsa to proceed to Bramhaloka – the abode of Brahmā and prophesied that Vyāsa would receive the complete knowledge about Her Divinity from the four Vedas present there in their personal forms. The Devī further assured that – “After the Vedas have described My glories, I shall reveal my true form and fulfil your wish”.

As directed, Vyāsa proceeded to Brahmaloka and bowed in reverence in front of the four Vedas, and humbly requested them to expound the knowledge of the indestructible spirit or the Brahmapada.

Each of the four Vedas, in the order spoke thus:

(Bhagavatī Durgā, who is seen as the Overlord of celestials by the blessed out of their devotion is alone referred to as the Parabrahma by men)

After listening to these statements by the Vedas, Vyāsa was indeed convinced that the undiminishable Parabrahma-tattva is Bhagavatī Durgā. Thus the Vedas began expounding, validating that which they stated earlier, by glorifying Devī Durgā, the embodiment of all deities in one of the most beautiful stutis. The stotra describes, in 6 verses, Her greatness. It also attempts to help the devotee in, somewhat understanding the magnanimity of Devī Durgā. Vedas spoke as:

O Durgā, the highest mother! Please bless this entire creation, You alone have, due to Your own will, with the three gunas created the three Devas, for the threefold tasks of creation, sustenance and dissolution, but nobody can claim to be Your Creator. O mother, Who in this world, is really capable of describing Your immeasurable virtues? Indeed your glories are countless.

Bhagawan Vishnu could protect the three worlds, by defeating without using weapons, the demons in battle, after He worshipped You. Shiva, who held Your divine foot on His chest, could drink the terrible Kalakuta poison, which could have destroyed the three worlds. O Ambika- the One who protects the three worlds thus, we are really incapable of describing your glories enough!

The one who has, with Her own gunas as Adi Maya of the Parama Puruṣa, manifested as this (visible) creation of embodied beings. The one who pulsates as the Ādi Shakti, the Cit-Śakti or blissful energy and the Parā-Śakti- the one beyond description. These beings are deluded as it were, by Mayā (avidyā) causing them to discriminate, on the basis of duality. O Ambikā! we bow down to You.

Parabrahma – that which is devoid of upādhi (adjuncts) such as masculinity or femininity is inspired to create by your Parā-Śakti which subsequently manifests in the feminine and masculine forms. Therefore, the Parabrahma too is your own Śakti, influenced by your māyā.

Just as hail can be inferred as a form of water, this manifest universe has come into existence due to your Śakti. Since It is conceived by the mind that Brahman is the basis of creation, which is in turn based on your Shakti. The Parabrahma which is masculine intellect energy, is also Your Energy.

O Durgā! You are the one who graces the six chakras of the body, by your presence in the Brahmarandhra and other (chakras). These are your glories that are dissolved into the paramesha or ultimate authority (Śiva) during annihilation- pralaya. Therefore O Śiva, Śiva and other forms of Almighty do not exist independently of You. They are revealed to the world by You (because of you). O Devī, Mother of the Universe, only your Lotus feet are worshipped by the Gods. Please bestow your blessings on us.

This stuti of the benevolent Mother, by none, but the all knowing Vedas, is a nectarine praise. The last verse is particularly as mystical as the Vedas be! The six chakras or the energy centres in the human body, are each represented by a lotus, having a certain number of petals each. The Mother Herself, who resides in the Lotus of each chakra, in the form of its ruling deity, is being glorified here. The stuti ends with the worship of Her Lotus feet, by the Devas and a prayer seeking Her blessings. Jay Jay Maa!