The Garland of Knowledge: A glimpse into Brahmajñānāvalīmālā of Adi Shankaracharya 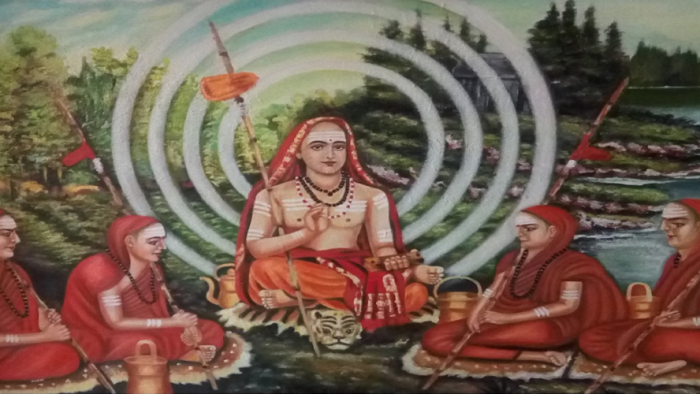 This short work of Brahmajñānāvalīmālā by Adi Shankaracharya is a heartfelt pouring of a
Jivanmukta, who is eternally established in the bliss of Atman. This song of the mukta, aptly
titled “a garland of long lines of knowledge of Brahman” is an inspiring call to all people
to renounce attachments and become mumukshus [1] in the pursuit of brahma-jnana, which
alone truly frees an individual. This work also serves as a tool of nidhidhyasa [2] for the
mumukshus, who are striving hard to realize their innermost Self.

While a detailed examination of the text is beyond the scope of this article, let us try to get a glimpse  of the beauty and depth of this composition. Examining in detail just the opening verse of the text provides an insight into the intellectual and spiritual stature of the revered Acharya.

Analysis: In the very opening verse, Adi Shankaracharya lays down the phalashruti- the end result- of this short work, unlike the normal practice of giving the phalashruti at the end of the text. This is significant in many ways. For one, by stressing the end-result at the onset, the revered Acharya appears to want to draw the attention of the readers towards this short, but important work. Secondly, it appears that the Acharya wants to point the readers towards the supreme significance of the end-result. And finally, Acharya lays down the audience to whom the entire text is addressed both generally and specifically, for which giving out the end-result becomes significant.

So, what is this end-result that the Acharya enunciates? In the second line, the Acharya says “brahmajñānāvalīmālā sarveṣāṃ mokṣasiddhaye”, thus positing moksha or the liberation from the karmic cycle of birth and death as the end result. Hindu tradition propounds four goals as worthy of attaining in one’s life called purusharthas: dharma, artha, kama, and moksha. While artha and kama, respectively refer to material prosperity and material pleasures, dharma refers to righteous duties. Dharma facilitates individuals to attain artha and kama on one hand, and transcend these two and travel towards Moksha on the other hand. But, it is the Moksha, the final liberation from the karmic cycle, which is posited as the ultimate goal of all life and hence placed at the end of the list of purusharthas.

Acharya in his Vivekachudamani says that this Moksha cannot be attained without first having accumulated dharmic merits (punya) over millions of lives previously (Verse 2). In the

Vedantic worldview, birth into a body happens to experience the results of actions performed in previous lives, which in turn is rooted in the false identification with the body-mind complex, which gives rise to desire and attachment. Thus, an individual is stuck in this karmic cycle, as long as he falsely identifies his Self with his body-mind complex and harbors desire for material pleasures. Since, this false-identification itself is an outcome of the ignorance (avidya) of the real nature of the Self, the solution to the pain and sufferings of the world, the path to get out of this karmic cycle is to discard the false identifications by attaining the knowledge of the true nature of Self.

The true nature of the innermost Self, the Atman, which we falsely identify with body and mind, is that it is non-different from Brahman (Mandukya Upanishad Verse 2) and that it is eternal, birthless, infinite, blissful and ever free. Thus, Taittiriya Upanishad describes the Self as satyam (eternally real), jnanam (knowledge/consciousness), and anantham (infinite) (Verse 2.1.1). Mandukya Upanishad, which calls it “turiya” and describes it as prapanchopashamah (culmination of the phenomenal world), sivah (auspiscious) and advaitah (non-dual). It is the attainment of this knowledge about the true nature of the Self, called as atma-jnana or brahma-jnana, which constitutes the means and the very definition of liberation. Thus, Svetasvatara Upanishad rightly says “One transcends death only by realizing/knowing Him, there is no other way than this (Verse 3.8).”

It is the attainment of such rare and most precious Moksha, which the Acharya puts forth as the phalashruti of this text.In the first line, he enunciates brahma-jnana as the means for this moksha, when he says “śravaṇamātreṇa brahmajñānaṃ yato bhavet‌- by listening which (i.e. the text), brahma-jnana is generated.”

We previously discussed about how one of the purposes behind the enunciation of end-results in the first verse  could have been that Acharya desired to discuss about the audience to whom the text is addressed to and the competencies that are required for a person to attain the phala-shruti spoken in the text. By saying “sarveṣāṃ mokṣasiddhaye-everyone would attain liberation”, Acharya makes it clear that the generic audience of the text is every person, regardless of their age, gender, class, or spiritual competency. This is so because, the current work, which posits moksha as the goal and which vividly, describes the nature of freedom and knowledge, can inspire every person to start the long journey towards moksha. By the clear cut exposition of the ultimate goal, the Acharya intends to facilitate each person, regardless of their background, to reassess their own lives and align it towards moksha. Thus, the intended generic audience of this short work is everyone. But, does it mean, every person will attain Moksha instantaneously on hearing these verses of the texts the very first time, as the Acharya says “sakṛt śravaṇamātreṇa brahmajñānaṃ yato bhavet‌”? No. If it were so, then thousands of people who have heard it or read it would have become liberated, which is not the case. Then, what does the sentence in line 1 mean? Who are actually competent to instantaneously attain the phala-shruti of the text then?

To understand this, let us examine the words “śravaṇa” and “sakṛt”.

The term “śravaṇa” has a very significant and a technical meaning in Vedanta. It is first of the four-staged process of jnana sadhana or vichara, which is also called as “Self-enquiry”. The Acharya in Vivekachudamani clearly states that it is only through “vichara” that one attains brahma-jnana and hence moksha and not through performance of thousands of actions. And sravana is the first step of this process. It involves listening to the import of the scriptures and the mahavakyas [3], followed by manana- reflecting on the teachings heard, and niddhidhyasa- contemplating on those teachings, which ultimately leads to direct realization of the true nature of Atman i.e. brahma-jnana.

Vedanta further elaborates the competencies collectively known as “sadhana chatushtaya” required for the practice of sravana etc.,: viveka (discrimination), vairagya (dispassion), a set of six qualities related to one-pointed concentration and meditation called shatka-sampati, and mumukshutva (burning desire for liberation). Thus, by using the term “śravaṇa”, the Acharya is narrowing down the specific audience to the “mumukshus” (those who are competent to practice vichara), for whom, the present work would be particularly useful in attaining the enunciated phala-shruti of moksha.

Then, by using the term “sakṛt”, which means “at once or simultaneously”, the Acharya further narrows down the audience to those who can attain instantaneous brahma-jnana after sravana and become jivanmuktas (liberated, even while alive). In the Vedantic scheme, the mumukshus are classified into three categories based on their competency (adhikara): mandha (dull), madhyama (medium) and uttama (higher). The uttama adhikari is one who is so steady and well established in his sadhana chatushtaya that he attains immediate realization of the Self upon hearing the import of mahavakya even once. In other words, for an uttama adhikari, sravana even once generates immediate and direct brahma-jnana. On the other hand, the madhyama adhikari will have to undergo all the three stages of sravana, manana and nidhidhyasa to convert the indirect knowledge gained from sravana into direct realization; while the manda adhikara must vigorously immerse himself with performance of karma and bhakti to purify the mind and become steady in sadhana chatushtaya.

Therefore, the Acharya is saying that it is the uttama adhikara alone, who would instantaneously attain moksha after hearing this present text even once. For the other mumukshus, the text would nevertheless assist in manana and nidhidhyasa and for the rest of the people; it serves as a document of inspiration and guidance.

Another interesting aspect of this verse is that, the Acharya compares the import of this text with the import of the mahavakyas of the Upanishads by saying that sravana of this text leads to brahma-jnana. One could question this assertion by stating since Acharya was a human teacher, how could he compare this text he has composed with the mahavakyas, which being a shruti is apaurusheya (not of human origin) and hence are alone the means for brahma-jnana? The answer is, though this text is composed by the Acharya, it is still of the nature of shruti, with the verses being an outpouring of a jivanmukta, who is perfectly established in Atman.

As the name of the work itself denotes, it is an outpouring of the uninterrupted flow of brahma-jnana. A comparison of this text could be made with Bhagavad Gita, which though is categorized as a smriti, serves the role of shruti as well owing to it being imparted by Bhagavan Krishna himself and hence has been rightly considered as one of the foundational texts of Vedanta. Another comparison could be made with the rishis, who saw and revealed the Veda mantras itself. Though, there is human agency even in that, the mantras in itself are considered as apaurusheya. Yet another way of looking at this is that, since, the import of this text is not against shruti and instead, it reinforces the teachings of the Upanishads, it may well be taken as being able to serve the same purpose imparting the knowledge of brahma-atma-aikyam as the Upanishads. Therefore, the Acharya is right in positing this work as fit for the practice of sravana, etc. by the competent seeker.

To sum up, in the very first verse, Adi Shankaracharya enunciates the phala-shruti of this text as the attainment of moksha for everyone. In doing so, the Acharya posits the present text as a moksha-shastra with the characteristics of mahavakyas. And as a result, this text can grant immediate brahma-jnana and liberate from the cycle of birth and death, those who are uttama-adhikaris.

These features make this garland of knowledge a unique composition in the tradition of Vedanta.