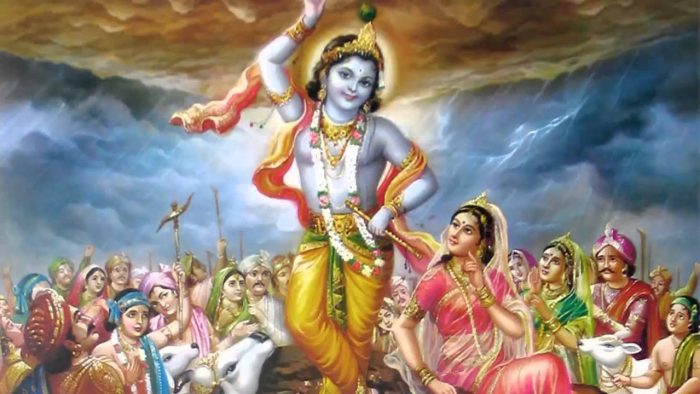 Through the ages, humankind has thrived on tales of wondrous heroes. We have always been on the lookout for living proof that greatness is achievable.  We crane our necks to get past the crowd in the hope that we might catch a glimpse of the ‘One’ whom we can look up to as an ideal, from whom we can draw inspiration.

The stories of Sri Krishna from Hindu history have been a source of inspiration for civilisation for thousands of years. Krishna presents a version of greatness that is about bringing harmony to the outer world along with the development of the inner world – the realms of consciousness.

The stories of Krishna offer up more than just a glimpse of ‘glory’ that many great kings from history have basked in through their mortal conquests. His stories provide answers to some of society’s most confounding ethical dilemmas, as well as offer the individual a pathway to self-realization – unlocking the codes to living by self-awareness, inner truth, and wisdom.

Who was this extraordinary being who not only fought great battles and rid the world of evil kings in his time, but also delicately charmed his way into the hearts of the faithful and continues to do so even to this day?

Sri Krishna — charming cowherd, glorious king, mentor extraordinaire and divine incarnation — lived nearly five thousand years ago. His early years were spent in a quaint town called Vrindavan in Northern India. Krishna is the soul of the Mahabharata, the charm of the Srimad Bhagavatam and the celestial voice of the Bhagavad Gita – each of these texts is a revered Hindu scripture.

To this day, stories of Krishna’s love and valor are told to little children before they go to bed at night, so that their dreams may be filled with something that Krishna gave in abundance to one and all – hope! Even today in many Hindu households, children grow up learning about the greatness of Krishna; about how he stood up for what was right; how he changed the world of his time through his divine shakti, his immense conviction and self-confidence, his vast and profound knowledge of the śāstras (sacred texts), and his deep concern for the welfare of others.

The quintessential ‘superhero’ is often ‘unattainable’. Whether tucked away in the annals of history, too famous to be reached by the common person in the present day or a mythical character of fiction – he or she is essentially someone you don’t expect to be able to directly communicate with.

Sri Krishna is a historical figure, but he is also revered as an avatāra (incarnation) of the Cosmic Being (Param Purusha) who is eternal and omnipresent. Both of these realities of Krishna exist at the same time, marrying the physical or gross with the subtle or transcendental. Krishna’s dark complexion is often described as a shade of blue. The color blue is symbolic of infinity, just like the infinite expanse of blue skies. He wears yellow garments.

Yellow is representative of the Earth, which is a finite body. The co-existence of blue and yellow, of infinity and the finite, of deha (physical body) and ātmā (Consciousness), describes the nature of Krishna’s presence.

Sri Krishna is honored generation after generation by the invocations of his devotees as that source from where the nectar of ‘ānanda’ or bliss consciousness originates. The invocation of the un-changing ‘puruṣa’ bestows deeper meaning to an otherwise ever-fluctuating experience of life.

Through sacred song, dance, and poetic verse –  a poignant, heart-to-heart connection with Krishna is felt by the devotee. His presence is experienced in the silence of the meditative Self; his footsteps witnessed along the path of karma and dharma (benevolent action in alignment with the natural laws).

bhakti (devotion), jnāna (wisdom) and karma (action) – the pursuit of these subjects of Yogic study invariably brings the seeker to the teachings, stories and leelas of Krishna. As the greatest of yogis – Yogeshvara, Krishna teaches the highest forms of Yogic Knowledge.

The stories of Krishna have been told in many different forms through the ages – through artistry, music, theatre, philosophy, and literature. Irrespective of the way Krishna is approached, he opens his devotee’s hearts to greater inspiration and the possibility of living the yoga of devotion.

The Vedic and Yogic traditions venerate him as a pūrṇa avatāra (a fully awake incarnation of Maha Vishnu) who lived in the historical period of the Dvāpara Yuga. He is not a fierce ‘God’ to be feared but is looked upon as an eternal friend, a sakhā, as a companion and guide.

Even as a little boy, Krishna protects the people around him by performing all sorts of miracles. For instance, he lifts the Govardhan mountain on his little finger to provide refuge to the village folk from the tumultuous fury of Indra. Yet, his supernatural powers do not make him too ‘God-like’ to mingle with the cowherds and spend hours tending to his cows, delighting them with his music and enchanting them with his loving presence. His humility is as striking as his greatness.

One moment he emerges victorious from a battle with a demon, and the next he is caught stealing butter, and yoghurt, from the gopīs (cowherd maidens). The gopīs, of course, delight in chasing him around narrow streets reprimanding him for his pranks, yet referring to him as “kānha” ever so lovingly. Even in the midst of mischief, he inspires adoration.

In our daily lives , we must juggle many roles. Can we play each role as wholesomely and efficiently as Krishna did? Can we infuse our relationships with more selfless love so that our interactions are not mired in conflict, but enriched with harmony?

In the Bhagavad Gita, Krishna’s description of a great person has little to do with someone who has conquered the world, has an enormous following, or controls a great deal of wealth. He describes a great person as one who is without envy, without hatred towards all beings, and the one who has the ability to remain faithful, steadfast and level-headed through the ups and downs of life.

Even today, there are those who hear the notes of Krishna’s flute waft over the rustling leaves of the trees in Vrindavan. Countless people sing his name in kīrtan (remembrance), and bring the joy of his colourful presence to their artistry. Each day, someone, somewhere, is inspired by Krishna’s eternal song of wisdom, and his clarion call to dhārmic action. 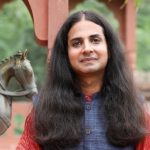 Sai Ganesh Nagpal is an award-winning musician, educator, and Vedic astrology counselor. He has been instrumental in bringing the devotional charm of Bhakti Sangeet (devotional music)Read more