Shiva in Hindu Temples- Part I 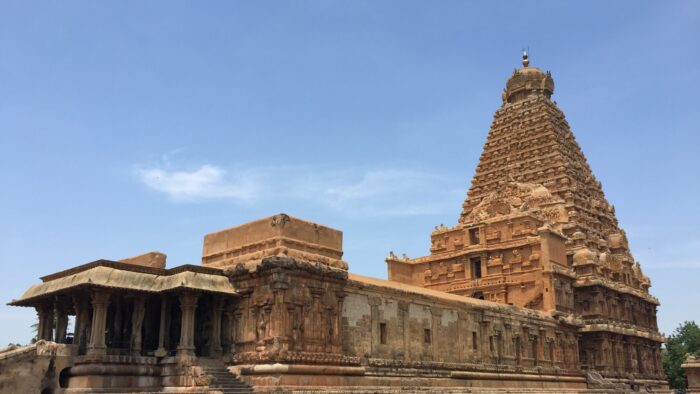 Just as it is beyond the bounds of possibility to remain unmoved by the pure waters of Ganga emanating from the dense coil of matted locks adorning the Adiyogi’s mane, it is inconceivable for one to remain unstirred by the many enchanting forms of Shiva. According to lore, benevolent Shiva who is the only hope of the weak and infirm, and the supreme deity of the rich and powerful, blesses one and all.

There is no doubt that Shaivic philosophy and traditions have had a great impact on Bhartiya society since the ancient times. Even from the Pauranic, philosophical and iconographic point of view, the illustrations of Bhagwan Shiva and his Leelas – his divine play, never fail to mesmerize us. Varied forms of Shiva can be seen spanning across the length and breadth of Bharat – from the smallest of villages to large cities, and even forests.

When he destroys the Tripurasuras after integrating the divinity of all the Devas, he is known as “Mahadev” and when he holds the Halahala Visha – the deadly poison in his throat during Samudra Manthana – The Great Churning of the Sea, he is known as “Neelkanth”, emphasizing how the poison made his throat blue in colour. When he skilfully tangles the eternally pure but forceful Ganga in his dense matted locks he is known as “Gangadhar” and of course he is the “Nataraja” for his cosmic dance Tandav. He is known as “Kamaantak” for turning Kamadeva to ashes and “Gajaantak” for killing the elephant demon Gajaasura. Bhairava, Veerbhadra and Jaalandhar are some of his other names. Lord Shiva’s many names assume varied hues underlining a particular attribute of the Lord.

According to another interesting tale, one day when Mother Parvati playfully covered the eyes of Lord Shiva, the creator of the universe, the whole world plunged into an abyss of darkness causing the entire world to come to a standstill. Shiva then used a spear to create a third eye in the centre of his forehead from which emanated light that shone as bright as the sun. Following this incident, Shiva is known as “Trinetra.”

To discuss the multiple forms and names of Shiva, there can be no better medium than the images found in the ancient Hindu temples – the pure and exceptional way in which the varied forms of Shiva are depicted there make an interesting study for artisans and researchers even today. The study of these diversified images across the entire country as a sum total of the distinctive local art style and the folklore of every region introduces us to not only our ancient spiritual philosophy, but also our rich cultural history. In addition to the Vedas, Vedantas and Upanishads, Shiva holds a special place in folk tales and this beautiful connection between the Lord and his disciples is much evident in these temples.

The first mention of Rudra can be found in the Rigveda, the Vajasaneyi Samhita of the Shukla Yajurveda and in the Atharvaveda. In the Vedas, he is described as having the complexion of camphor and adorned by golden ornaments. He is said to artfully tie his locks and holds a bow and arrow with elan. Bhaav, Sarv, Sahasrabaahu, Mahadev, Pashupati and many such names are used to describe Rudra. Ugra, Ishana, Aghora, Neelagreeva, Kapardina, Sabhapati, Senani, Bheema, Shambhu and Shankara are also some of the other names of Rudra. It is interesting to note that in some places, Shiva depiction holds the imagery of Agni.

In the Puranas, the Trishul-bearing Shiva is thought to be the base of all life forms on Earth. Pauranic scriptures depict Shiva with venomous snakes as his ornaments and Janeau (sacred thread), and also as the God of dance and music. We see a gentler form of Shiva in the Vedas as compared to the Puranas where he is depicted in his Ugraroop or the angry form. When we see Shiva in the ancient temples of Bharat, the difference in the Vedic and Pauranic forms becomes crystal clear.

Let’s attempt to make a comprehensive classification of the idols of Shiva found in Bharatavarsha. While closely studying the images of Shiva, first and foremost we can classify them into Ling-Pratima (icons of Shiva Linga) and Roop-Pratima (icons of the different forms of Shiva).

Furthermore, the Ling-Pratimas can be divided into Achala- immovable and chala- movable, also known as sthavar and jangam respectively. The discussion of Svayambhoo (naturally occurring) and human-made Shivalingas is also essential. The first mention of Linga-Puja is found in the Rigveda where the Shivalinga is called ‘Shishna-Deva’. In all likelihood, Ling-Pratima is one of the most revered devotional icons in Bharatvarsha and even in modern Shiva temples, worship in the form of Linga-Puja is the most common one.

The varied emotions of Shiva form the basis for the classification of Roop-Pratima – for example, we see the Shiva who is compassionate, showering abundant blessings on his bhaktas; the gentle or furious (Ugra) divine dancer or Nataraja, a form of Guru imparting knowledge, the teacher of music and Yoga as Dakshinamurthy Adiyogi. Besides these forms of Shiva, sculptures from important incidents like the wedding of Leeladhar Shiva, the descent of Ganga and Lingodbhav hold a special place in Hindu temples.

In the Puranas, the rage-filled form of Shiva is also thought to be ‘Kalyanakari’ or one that ultimately causes welfare, as His anger is only meant to destroy the Asuras or the arrogance of Devas. These infuriated forms of Shiva are known as Samhar murtis. In his rage filled form, Shiva’s images hold a different identity altogether. The various texts of Shilpashastras contain detailed discussions on which aspects of Rudra Shiva can and which cannot be depicted.

In some portions of the Puranas, there are not only diverse but also fundamentally different stories attributed with respect to Shiva and his Rudra form. According to the Vishnu Purana and the Markandeya Purana, once when Lord Brahma was meditating, a child jumped into his lap crying. On being asked by Brahma as to why he was crying, the child replied that he was upset as his Naamkaran Sanskara had not been done. Even after Brahma named the child Rudra, he continued to cry. Then Brahmaji addressed him by various names, which included Bhaav, Ishaan, Sharva, Pashupati, Bheem, Ugra and Mahadev – this is how Rudra came into being. This story finds different interpretations in different places – some of which we shall discuss later.

Similarly, we see different versions in different texts which are often at odds with one another, which may cause difficulties for readers with a limited vision. In the Vana Parva of the Mahabharata, Arjuna- when describing Hari-Rudra- says, “I see Shiva in the form of Hari and Hari in the form of Shiva as a single entity.” In the Shanti Parva, Shri Krishna performs the puja of Maheshwar and Shiva performs the puja of Narayana. In the Harivamsh and Markandeya Puranas, we can obtain detailed descriptions of Harihara.

The many forms of Shiva and the chronicles associated with them do have a common vein at some point and the spiritual meaning of these stories engrained in the Puranas as well as the physical forms of Shiva’s sculptures hold within them deep philosophical secrets, which require deeper research and discussion. So, let us make an attempt to fathom the depth of the philosophy associated with Shiva Pratimas and their various forms.

(This is an English translation of an article in Hindi by Trushar.)