The Navadurgas of Navaratri: Part I 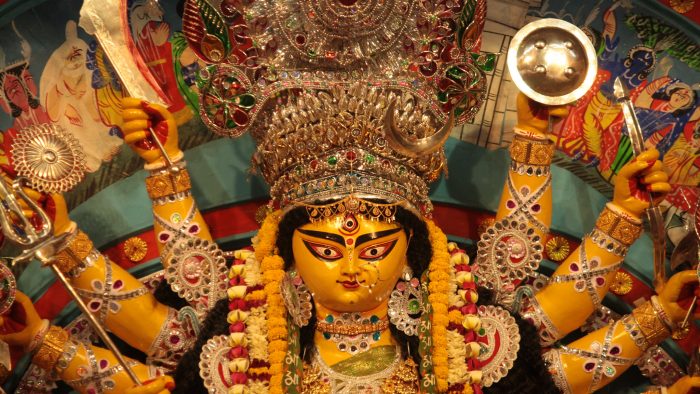 Navaratri, or Dashara, is a festival celebrated all around India to mark the triumph of good over evil. It is a time to look back on our rich heritage for stories of the noble prevailing over the immoral. Navaratri also in particular celebrates Devi and her many forms. There is a tradition of Navadurga in which each day of the festival is dedicated to one of the avataras of Devi Durga. Each of these forms explores a different aspect of Durga and gives us an insight into the incidents of her life.

The first day is dedicated to Devi Shailaputri. “Shailaputri” means “Daughter of the mountains”, as Parvati is the daughter of King Himavan. She also bears the name of Hemavati for this same reason. There is also an interesting story behind this form of Durga Devi. As a young woman, when Parvati was playing with her friends, she came upon a cow calling out to her for help. Upon investigation, she learnt that the demoness Tarika, sister of Tarakasura, was attacking the cow’s herd. To shield the creature from harm, she transformed herself into a small Shaila and hid the cow. Whenever Tarika tried to attack the cow, the Shaila would move and block her. Tarika, growing frustrated with the shifting Shaila, struck it to break it. From it emerged Devi Shailaputri, seated on a bull, bearing a trishula in one hand and a padma in the other. She killed Tarika with the trishula.
Devi Shailaputri is thought of as a form of Mother Nature and this can be seen both from her name and from her love of the creatures of the earth. She is also considered as the shakti behind Brahma, Vishnu and Maheshwara.

The second day of Navaratri is in celebration of Ma Brahmacharini, the ascetic form of Durga Devi. The picture of peace and tranquillity, she is seen dressed in white, holding in one hand a japa mala and a kamandala in the other. After Shiva had turned Kamadeva to ashes with his third eye, Parvati realized that the only way to Shiva’s heart was through deep penance. She took to a mountain that came to be known as Gaurishikhara for her meditations. Kalidasa’s Kumarasambhavam describes one of the stories from Brahmacharini’s life. When Parvati was meditating, a young Brahmachari approached her. Upon learning of the reason for her tapas, he mocked Shiva as bearing none of the qualities one desires in a husband. Parvati shook with rage and her eyes turned red. Her reply was,
अलोकसामान्यमचिन्त्यहेतुकं द्विषन्ति मन्दाश्चरितं महात्मनाम्।
(The foolish find it easy to find fault in the great as they cannot perceive their greatness.)

She also went on to say,
अकिञ्चनः सन्प्रभवः स सम्पदां त्रिलोकनाथः पितृसद्मगोचरः।
स भीमरूपः शिव इत्युदीर्यते न सन्ति याथार्थ्यविदः पिनाकिनः॥
(Though he has nothing, he is the source of all the wealth in the world, though he lives in the cremation grounds, he is the Lord of the three worlds, though he bears a fearsome form, he is known as Shiva- of gentle aspect. There are none who know the Trident-holder for who he truly is.)
Just as she was attempting to get away from the Brahmachari who had insulted her love, he revealed his true form. The Brahmachari was none other than Mahadeva himself, in disguise to test Parvati’s devotion. In this way, Devi Durga as Brahmacharini won the affections of Shiva.

The third Navadurga of Navaratri is the majestic form of Chandraghanta. Bearing a trishula, gada, khadga, bow and arrow, ghanta, kamala and kamandala in her ten arms, she strikes terror in the hearts of her enemies and offers refuge to her devotees. She is seated on a tiger and holds the abhaya hasta in one hand to give strength and courage to her devotees.
It is said that Devi took on this form for the first time during Parvati’s wedding to Shiva. The grooms party of Shiva and the ganas arrived in their most terrifying forms. This frightened many of the guests, some even fainted from fear! To match the terrible form of Shiva, Parvati transformed into Devi Chandraghanta, the golden hued one bearing ten arms. She requested Shiva and the ganas to take on less fearsome forms for the duration of the wedding. Shiva and the ganas acquiesced.
The form of Chandraghanta shows us the two sides of Devi; she is unsparing to the wicked and compassionate to the good who seek her protection.

The fourth day of Navaratri is to celebrate Devi Kushmanda. “Kushmanda” roughly translates to “Small egg of energy”. Durga Devi is thought to be the cosmic egg from which the entire universe came into existence. Before her, there was no time, no space, no matter, no energy, absolutely nothing. Then suddenly, out of the vast nothingness, emerged Devi, as Kushmanda. From her came the three worlds, the Trimurti, indeed the whole universe. She is the shakti behind everything, chala and achala, small and big, tangible and intangible. Devi Durga is known as Jagajjanani, Lokajanani, Jagatkarini, Ambika, Dhatri, and many more names that revere her as the eternal mother.
Ma Kushmanda is seen holding a chakra, a gada, a bow and arrow, a kamandala, a japamala, a kamala, and a pot of amruta in her eight hands.

Read about the other forms of Durga Devi in part two.