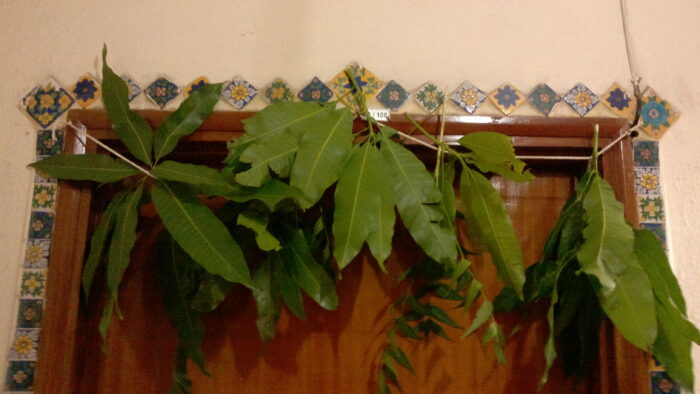 For the next two days, festivities will occupy the entire nation- from Puthandu in Tamil Nadu to Navreh in Kashmir, and Chaitra Navaratri in Gujarat to Bohag Bihu in Assam and other parts of Northeast India.

The lunisolar new year is celebrated as Ugadi (in Telugu) or Yugadi (in Kannada) in Andhra Pradesh, Telangana and Karnataka. It is thought to be the day when Brahma created the universe- hence starting the Krita yuga, or the day when Vishnu took the avatara of Matsya. Homes are decorated with muggu or rangoli, flowers and neem and mango leaves. A pacchadi (mix) of raw mango, neem flowers, chilli powder, tamarind and jaggery is prepared and eaten by the family. These different flavours symbolise the different experiences that we will face in the year ahead and the need to balance these moments to find happiness. Kannadigas call this paccadi as ‘bevu-bella’, which translates to neem and jaggery. Panchanga Shravanam- or the reading of the new year’s panchanga is carried out by archakas at temples, or by the elders of the family. The Indradhwaja is worshipped to invite rains, similar to the custom of Gudi Padwa. In Karnataka, delicacies like obbattu are enjoyed in traditional Yugaadi ootas.

Gudi Padwa is celebrated by Maharashtrians and Konkani people. It gets its name from the “gudhi”, which translates to “flag”. The gudhi is a pole with a piece of cloth attached to a kalash, decorated with flowers and neem and mango leaves. This gudhi is hoisted outside people’s homes. The flag is said to represent Brahmadhwaja or Indradhwaja. In Gudi Padwa too, a mixture of neem flowers, jaggery (gur) and raw mango is eaten.

This year, the solar new year nearly coincides with the lunisolar new year. This festival is celebrated in Tamil Nadu, Kerala, Odisha, Assam, and many other parts of India, under different names. In Tamil Nadu, the new year is known as Puthandu or Puthuvarudam. It marks the beginning of the first Tamil month, Chitterai. Homes are decorated with elaborate kolams, as well as with neem and mango leaves. Pacchadi of raw mango, neem flowers and jaggery is made in Tamil households as well, representing the many flavours of life. In Madurai, the new year is the beginning of Chittirai Thiruvizha, a festival to celebrate the marriage of Meenakshi- the warrior-princess daughter of Malayadhwaja Pandian, and Shiva. 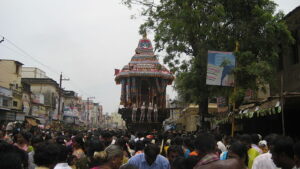 On this day, a special tray is assembled with fruits, betel leaves and arecanut, along with gold jewelry, money and a mirror. This is prepared a day before the festival, as it is thought of as auspicious to see the arrangement in the morning of Puthandu. A similar custom is carried out in Kerala for Vishu, where this set-up is called Vishu Kani. In Vishu, the sadhya- or festival feast- has dishes with various tastes- Veppampoorasam- a bitter neem dish, Mampazhappulissery- a sour mango item, sweet coconut milk and others. Here, the sadhya itself represents the mixed experiences of life. 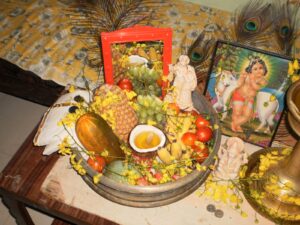 Bohag Bihu or Rongali Bihu is the new year celebration of Assam and other parts of Northeast India. It is a seven day festival at the beginning of Bohag, the first month in the Assamese calendar. In this grand festival, people of all ages take part in Bihu dancing and Bihu geets. Husori, another song and dance tradition, in which a group of singers go from house to house accompanied by drum beats, is also an important custom. Several other dances like the Mukoli Bihu and the Jeng Bihu are partaken in.

The Odia new year, called Pana Sankranthi or Maha Vishuba Sankranthi, is also celebrated at the same time as Bihu and Vishu. It is considered as the birthday of Hanuman, and hence, his worship is an important part of the festival. Shiva, Shakti and Surya are also worshipped during this time. The festival gets its name from Pana, a drink made with bel fruits, milk, spices, sugar and other ingredients. An interesting custom in Odisha is the offering of Bel Pana to Ma Tulasi. A pot of the drink is hung above the Tulasi plant and a hole is made in the pot so that the Pana falls to the plant drop by drop. This is both a form of worship of Ma Tulasi, for her medicinal properties, and also a welcoming of the coming rains. 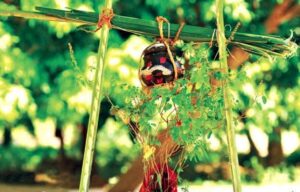 Vaisakhi or Baisakhi, named after the month of Vaishakha, is the new year festival in many parts of North India. In Bengal, this festival is known as Pohela Boishakh or Bangla Noboborsha. Baisakhi is also observed as the day Guru Tegh Bahadur attained sadgati for refusing to convert to Islam, and is hence an important day for Sikhs.

In Kashmir, the new year is celebrated as Navreh. The new panchanga, known as nachi patra, along with offerings like flowers and walnuts are covered on a thali, on the eve of Navreh. Gold jewelry, stationery and a mirror are also placed on the thali. On the day of the festival, the thali is uncovered, similar to the custom of Vishu Kani in Tamil Nadu and Kerala. A mixture of a bitter herb called wye and walnuts is eaten, to symbolize the varied experiences one will face in the coming year.

In Gujarat, the first day of Chaitra is not celebrated as the first day of the new year, but as day one of Chaitra Navratri- or Vasanta Navaratri, a nine day festival celebrating Devi, similar to the more well known Sharada Navratri. During this time, Gujaratris take part in Garbha and fast in obeisance of Devi Ma.

This year, with the near coincidence of the lunisolar and solar new years, it seems like the entire country is coming together in one celebration. We join each other in welcoming the new year, while upholding our respective customs and traditions, and carrying forward the wisdom of our elders and our communities.

In these times of difficulty and uncertainty, I believe this togetherness of thought will show us the way.