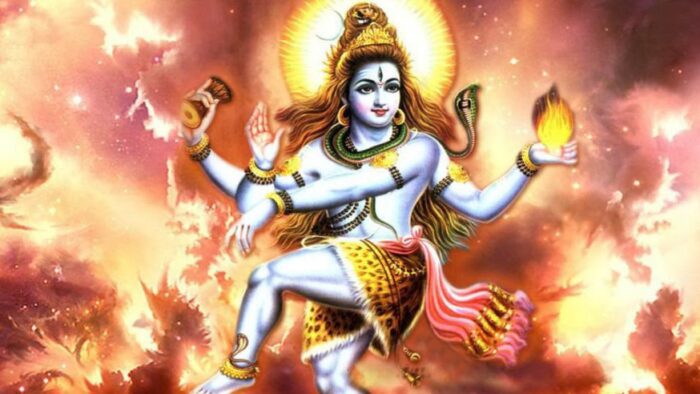 Śiva is Digambara, the Lord of ascetics, one who is robed in the Cosmic haze. In the beginning of Time, Śiva danced the Tāndava to the rhythm of the damaru in his hand.

As Brahma sat in meditation, he heard the sound of the damaru and its vibrations filled the cosmos with the sound of ‘Om’. Brahma was inspired by the overpowering sound of ‘Om’ which sent ever expanding ripples of sound, as he created the Universe.

It is believed that the universe was created by the sound of OM, the ‘Pranavanād’, emanating from Siva’s damaru. The sound of the damaru throbs like the heart which is our life-breath. Our heartbeat is the unit of rhythm. The Cosmos exists and is upheld by the vibrations of sound resonating from the damaru’s ‘Om’. Sound and music permeate the world and lead to higher consciousness, spirituality and rising of godliness. Music in its two forms āhata (heard) and anāhata(unheard). Nāda yoga is the basis of yogic practices and breath control.

Music is the vehicle of saints and poets who attained great heights of devotion and showed the way to achieve salvation or Moksha in this era of Darkness or Kaliyuga.

Śiva is both Saguna and Nirguna. The presence of Shakti Parvati gives him a Saguna form which can be worshipped by his devotees. As Nirguna he is worshipped as a Lingam. Śiva is unique among the deities as he is adorned with a variety of curious ornaments.

Among the most magnificent and loved ragas in our music is Śankarābharanam. Some ragas contain five notes or less; this raga, like all major ragas, contains all the seven solfa notes or swaras. The name Śankarābharanam denotes Siva-Sankara’s ornaments.

The seven notes emanate from the five faces of Siva. They rise at the navel, are enriched by the heart and voiced by the throat and nose. These seven swaras are ‘Sa, Ri, Ga Ma, Pa Da, Ni’.

The seven swaras have the power to heal our mind, raise our consciousness and increase the sattva quality or purity of our heart. This is why scientists of ancient Bharat used musical notes in healing minds of patients who needed to balance their emotions. These notes have metaphysical, co-related links to our personality and emotions.

The Navarasa or Nine Sentiments are ruled by the seven swaras.

Sa-Vīra and Raudra (Valour and anger).

These seven notes are said to imitate the sounds of the beasts and the birds.

The ornaments of Śiva are symbolic and each has a sublime reason for being connected to Śiva in his various forms. The tiger skin he wears around his body, the elephant skin he donned after the killing of the demon Gajasura, the deer in his left hand and the fire in his right, each has a purpose and origin. The weapon he holds is the trishul, a trident with three prongs which represent the three gunas, Tamas-rajas -sattva.

Bhasmadhari Siva, covered in ash from the burning bodies of the cemetery warns us of annihilation of every atom in the universe when it is time.

As Nataraja, the Cosmic Dancer, he has four hands. He holds fire in his right hand, deer in his left. His left hand is stretched across his torso to point to his left leg which is aloft. The right hand shows grace, the varadahasta. A ring of fire surrounds Natarja as he dances the vigorous Tandava.

Siva’s Third Eye is the seat of wisdom. The intense fire that emanates from the third eye, if it is opened, reduces everything to ash- like Kama was, when he disturbed his meditation. The three lines of Vibhūti on his forehead, represent negative aspects of Aham (ego), Māya (illusion), and Karma (act with expectation of reward). His ash-smeared body is a reminder to the world that everything has an end, must be reduced to ash and gets combined with earth.

Music originated from Śiva and seven notes correspond to the seven ornaments of Śiva in his form as the Cosmic Dancer, Nataraja.

In his kriti in Śankarābharanam beginning with words ‘Swara Rāga Sudhā Rasa’, the saint-musician Sadguru Tyāgaraja says, ‘to realise the origin of Nāda and Mūlādhāra is itself bliss and salvation. It is important to have the knowledge of the various parts of the body from which the seven notes emanate.’

The seven notes are connected to Śiva and his ornaments.

The snake represents timelessness as they have a long life-time. Śiva wears the snake as his ornament denoting that he has no fear. So too can devotees conquer fear.

The snake around his neck and adorning his ears and hair-knot reflect the demoniac powers which are kept under control by Siva. The snake sits coiled in our Mooladhara chakra and rises up the spine after intense spiritual practice

The snake reminds us that Siva’s form is of the One who has no end. Time or death holds no fear for Him as He is the Lord of death.

Rudraksha beads are seen on Siva’s Neck and arms. The beads, known as Rudra’s tears and are found only in countries like Nepal. The bead necklace represents the elements used in the creation of the Universe. He is the master of all the elements.

The element of water nourishes life but can destroy when in spate. If the Ganga descended directly to earth, her powerful rush would have destroyed the Earth. Śiva intervened, caught her in his hairlocks and let only a gentle spring fall on earth to protect, nourish and purify the mortal souls.

As Śiva has control over the seasons, the flora and fauna, in short, entire Nature. He holds a deer in his left hand as Nataraja indicating that art needs focus and the mind must not be restless like the deer. The deer could also represent the four Vedas.

Śiva must be worshipped with flowers like the rose, Bilva leaves, Datura, and hibiscus flowers, juhi, and jasmine. But the flower most dear to him is the rare blue lotus or lily.

‘Om’ is the origin of language, music and dance. ‘Om’ emanates from the sound of the damaru. It was Siva’s tandavam which was the origin of Dance and it was His damaru which created music.

As Chandrasekhara, the crescent moon is held in his hairlocks, always depicted in its fifth day of waxing, symbolizes that Śiva is the complete master of time. The moon controls the ocean’s tides and affects the mind of human beings.

And thus forms Śankarā Ābharaṇam, both the raga and the ornaments of Śiva. 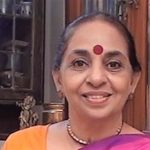 Indumati Raman initially graduated from the prestigious Kalakshetra College of Fine Arts in the vibrant presence of the founder Rukmini Devi Arundale. As Patron, SponsorRead more