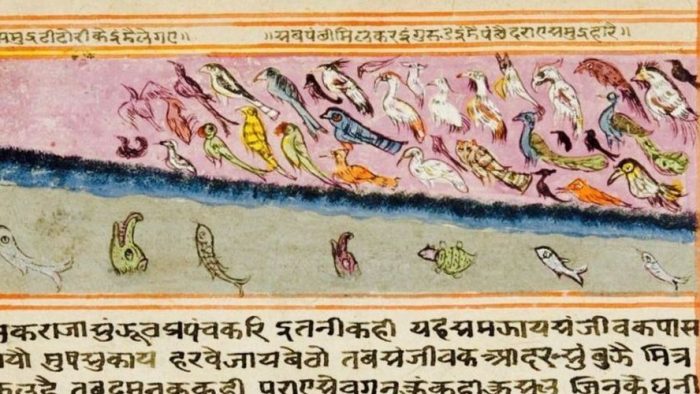 Being Rooted and Free to me is to be able to learn and understand the morals and values our culture upholds in a way which, as a child caught between cultures, is still relevant and relatable to my life experiences. In a time where the next generation is getting a multicultural upbringing, it is important to modernise the tales and stories of our culture that teach us its morals and values in order to be relatable to the younger generations.

Being someone who moved away from India at a very young age, it has always been hard for me to relate to my peers who have moved away later. Understanding things like why it is important to go to the mandir early and pray sincerely to Bhagwan when I lived in non theistic Japan and Singapore was a challenge for me. However, as I grew older I was able to reconcile my Indian background with my multicultural upbringing, thanks in no small part to my early teachers; my parents.

From a young age, my parents, in particular my Nana, made it a point to teach me about Indian myths and legends. He has always been of the view that the arts are the best way to instil the values of our culture, and it was no different when it came to me. However, as he often tells me quite fondly, the first time he attempted to introduce me to the magical world of the Panchatantra stories, the then four year old me quickly got bored within the first minute of hearing about the wily ways of the scheming Damanaka. My father was quite dismayed at this, but did not give up hope that I would grow to enjoy these tales just as much as he did.

One day, when I came back from Yōchien (Kindergarten), obviously upset, he saw his chance to impart the lessons that the Panchatantra tried to teach. That day, my two best friends Yuko and Asami had told me that they had seen the new girl in Kindergarten, who I had eagerly befriended the day before, playing with my arch nemesis Kanto! As I woefully retold this tale to my dad, he had a sudden stroke of inspiration. Sitting me in his lap in his favourite armchair in the living room, he recalled the same tale he had tried to tell me weeks before.

But this time, gone were the sly duo of Damanaka and Karataka, instead replaced by the Kitsune Kuto and Korra. The trusting lion king Pingalaka and the kindly buffalo Sajeevaka became the shrine deity Aka and monk Momo. I sat, enraptured, as he wove a tale of friendship, deceit and lies, making nary a noise until he had finished and asked for more.

Just like that, my father had managed to complete his goal. As I grew older and moved to Singapore, he moulded his stories to best suit my personality, interests and environment at the time. He stopped telling me stories about Kuto, Korra, Aka and Momo a couple years after we left Tokyo, instead preferring to tell me the original versions, but I always remember them as little miracles.

The younger me always felt disconnected from Indian culture. She definitely looked Indian, and that distanced her from her homogenous Japanese peers, but in she spoke the same language they did and lived the same way they did. She was reluctant to learn about Indian culture and traditions because she felt that if she shut out the side of her that made her different from everyone else, she would be able to fit in better. My Nana managed to make me feel closer to my roots, and showed me that culture is not just about the stories and legends that it has, but the morals and values it tries to teach.

This memory is but one in a childhood filled with thousands, but it is such a distinct and important one to me because it has shaped such a big facet of my personality. Thanks to my father’s tales, I am proud of my Indian roots. I have taken an active interest in learning about Indian culture because he showed me how our culture transcends borders and boundaries, that it is universal and that it has important lessons that are applicable in our current world. Therefore, I think that being rooted and free is being able to understand the morals and values of our great Indian culture and knowing how they are still relevant no matter when the time or where the place.

(IGenPlus had announced an essay competition in July and we will be publishing the winning essays. This is the first essay selected.)