Re-Reading the Mahabharata at 14 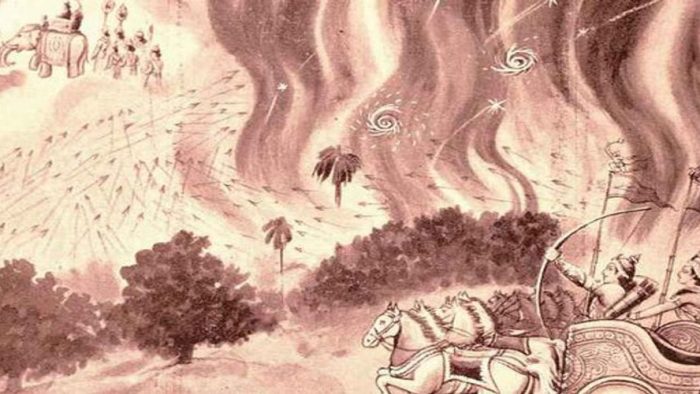 The Mahabharata is described everywhere as an ‘universal’ epic that is ‘appealing to all ages’, which I’d never really seen before, but recently I happened to read multiple versions of the Mahabharata again after a long gap of at least 5 years, if not more.

The last time I had read it, it hadn’t been much more than a nice story to me. There were five brothers, who were good, and there were a hundred of their cousins, who were generally accepted as bad. And then in the middle there were a lot of sub-stories, but they were just branches of the main tree.  Predictably, good won over the evil and all was right with the world. But this time, reading the Mahabharata made me see the epic in a whole new way.

Actually, I don’t think I would have read it at this point if it hadn’t been for my mom. I had multiple renditions of the story in my bookshelf, but I would never have picked one up if my mom hadn’t marched me to her bookshelf, and stuffed ‘The Curse of Gandhari’ (by Aditi Banerjee) into my hand.

The book presents an interesting fictional take on the Mahabharata, seen through the (metaphorical) eyes of Gandhari. Aditi Banerjee takes you through a journey that, although not supported wholly by historical records and texts, is enthralling anyway.

While reading the book, while I was subconsciously aware that part of it was probably the writer’s imagination, I did want to know what was the original version. And so, I picked up the ‘Puffin Mahabharata for Kids’, by Namita Gokhale. This was my first book on Mahabharata ever, and it was my favorite book for a long time as a kid. Although it was an adapted version meant for kids, it incorporated many details, which I loved, and told the timeless story in a wonderful way.

Re-reading the book, I saw multiple parts which corresponded to those in Banerjee’s book – Yuyutsu wasn’t, in fact, Gandhari’s son, which I had somehow overlooked in all those years previously. Vikarna was the ‘good’ Kaurava, but he didn’t choose to fight on the Pandava’s side. He fought for the Kauravas and was killed while fighting on their side. Nakula had sworn to kill Uluka, Shakuni’s son.

But now that I’d read it, I was on fire, hungering for more. I wanted to read even more. I sought out the three volumes of the Amar Chitra Katha Mahabharata. Throughout my life, I’ve always preferred regular books over comics because they gave me a chance to adapt the visuals to my own imagination, but the Mahabharata by ACK is indeed a great reference point. It is very comprehensive version, certainly the most comprehensive one that I have read.

I went through it, and drew loads of parallels. In an epic that’s been told and retold as many times over the years as it has, I assumed that everywhere I looked, I’d find a dozen versions of the same story, but that was not the case.

Of course, with age came a truckload of new questions – in a patriarchal society, how does it matter who Vidura’s mother is? If he is perfect in all other ways, why can’t he inherit the throne? If Dhritarashtra was deemed unsuitable to rule as a child solely because of his blindness, how come he received kingship later on, even if it was as a steward before Yudhishthira became the king? Why did he maintain his hold on the kingdom – why was he allowed to?

In some versions, Arjuna did not respond to Urvashi’s attention because he already had two wives – in another, he married twice more, and refused Urvashi because she was once Pururava’s wife and Pururava was Arjun’s ancestor. Even though Krishna was Karna’s maternal cousin too, why did he prefer Arjun over Karna?

Why did Arjun feel the pain of possibly killing his family and friends more acutely than Yudhishthira, child of Dharma, who is supposed to be the moral compass of right and wrong? Why didn’t Bheema just step over Hanuman’s tail? Despite having harnessed the power of asuras (which occurred in two of the versions I read), how did Duryodhana manage to retain godly favor?

When Arjuna was helping Agni consume the Khandava forest, why did Indra side with his friend over his own son?

Along with these questions, came revelations – Draupadi became an icon of fiery feminine power, the epitome of female glory. Yudhishthira who, earlier, had been placed upon a high pedestal, now seemed a relatively weak character, who could not say no to temptation. Karna, whom I had viewed as a villain for so long, became slightly less vilified (by myself), although not totally because of his conduct towards Draupadi during the game of dice (although admittedly, this might have been because she so rudely turned him down at her Swayamvara because of his perceived low birth).

Sanjaya became a vastly more interesting character. His neutrality in a war where cousins, teachers, uncles, grandfathers had to take sides, his neutrality as a charioteer serving Dhritarashtra became an incredible phenomenon. If I were to tell the Mahabharata through a character’s eyes, the way Aditi Banerjee did with Gandhari, I would pick Sanjaya. The only neutral character during the entire war, his would certainly be the least-biased, and possibly the clearest telling of the entire story.

Another story, which I found later in ‘The Serpent’s Revenge and Other Stories’, by Sudha Murty spoke about Barbarika, Ghatotkacha’s son, who had made a promise to his Guru to always support the weaker side in a war. After a lengthy conversation with Krishna, this led to the realization that Barbarika would constantly be switching sides in the war, and Krishna had to decapitate him, although only after promising to let him watch the whole war. His head was placed on a tree in the middle of the battlefield, and he watched the entire war as yet another passive observer. However, this was the only mention of Barbarika I found anywhere, and although I am very fond of Sudha Murty as a children’s author, it did not appeal to me as much, so I would still choose Sanjaya.

Reading the Mahabharata after so many years helped me understand the subtext of meanings behind the story. To me, Yudhishthira accepting the second invitation to gamble even though he suspected foul play, taught me that respect to elders is a great thing – except when it impedes yourself.

The Mayasabha palace in Indraprastha showed me that everything is not what it seems – Duryodhana’s ‘incident’, taught me to look before you leap.

The Pandava’s acceptance of Khandavprastha, even though it was completely undeveloped forest land, taught me to work with what you have, and be satisfied with it.

Apparently, I’d overlooked all this stuff before. Like I said, for me, as a child, Mahabharata was another bedtime story – read the book, enjoy the story, close it, mourn a little bit about the ending, and then find another book.

Reading the epic again after so much time gave me the chance to see the hidden traceries below the surface, to observe and to try to understand the true message of the Mahabharata – and not just the Bhagavad Gita.

This piece is authored by Ananya Narayani Ganesh, a young adult and an enthusiastic reader