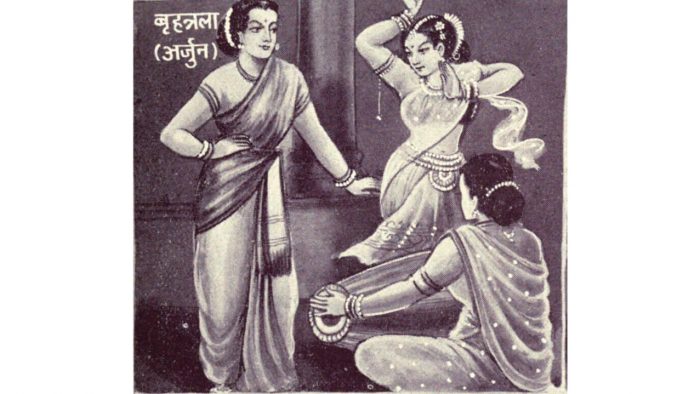 Uttaraa drew the fabric of her sari over the head and quickened her pace as she headed down the hallway. Opulent tapestries and murals hung from the walls, but she couldn’t spare a moment to take a look.

The Kauravas had come to Matsya. Her brother was going. Her father was going. All of her uncles, her mother’s brothers were going. The whole kingdom was rushing about in a tizzy, frantically stockpiling armor and weapons. In the fifteen minutes that she’d been walking down the hallway, no one had stopped to say a word, or even listen to one.

Uttaraa wanted to fight. As a child, she and her brother Uttar had sparred in the palace playgrounds, with wooden sticks. Back then, the rules hadn’t been so rigid. If children wanted to play, they could. She remembered bursts of tinkling laughter, and the occasional exclamation as one of them managed to get in a hit.

And she knew her brother. He was – well, there really wasn’t any other way to say it – a bit of a coward. Uttaraa loved her brother; don’t let there be any mistake about that. He was an excellent statesman and orator, and had provided an able substitute for her father on the rare occasions that he had been unwell. But his skills lay in the court, not on the battlefield. He’d trained, to be sure. His entire childhood had been filled with multiple teachers, who had all instructed him in the various arts of warfare. But he’d never practiced them before on real people. And straw dummies weren’t the same thing.

Somehow, Uttaraa knew that at the crucial moment, her brother would turn around on his tail and flee. She just wished her father would offer her the opportunity. Ever since her education had been diverted to more ‘appropriate’ subjects, she’d snuck out at night and met with Uttar, who had offered to show her what he had learnt that day. His memory left something to be desired, but he had been a good teacher, yet another skill that belonged in the courtroom.

Uttaraa took a sharp turn into her chambers. Brihannala, her dance and music teacher was waiting for her along with her friends and ladies-in-waiting, one of them holding a tray filled with all the items necessary for the appropriate sendoff that awaited King Virata and Prince Uttar.

Uttaraa offered a small smile and lifted the tray our of her friend’s hands. Brihannala smiled encouragingly at her, and so Uttaraa turned around and marched back out of the chamber, trying hard to keep her mind off what was to come.

Uttaraa grunted and yelled as she hefted the sword in the palace courtyard. It was lighter than the swords used by the menfolk and warriors, but Uttaraa still found it quite a task to lift it and direct it to where she wanted.

Practically all the members of the palace, including the cowherds and the cooks had left to fight in the war. Uttaraa didn’t understand. How could a cowherd have the training and ability to fight in a war against possibly the most powerful kingdom in all of Bharatvarsha? Her mind wandered back to her missing dance teacher.

Brihannala. She’d taught Uttaraa dance and music for over a year, but Uttaraa had always had the impression that there was an underlying power that lay beneath the seemingly innocent frame. Brihannala had a certain aura which did not match anything Uttaraa had ever known before, not even that of her father. It confused Uttaraa. She definitely wasn’t like anybody else she had ever known.

The sharpened steel cut through the dummy, which exploded straw all over the palace. Uttaraa dropped the sword onto the dusty ground and wiped her brow. After resting to catch her breath for a few minutes, she picked up and sheathed the sword before placing it back in the weapons rack so that it would not draw attention. Although after a war, that would presumably be the last thing on people’s mind assuming they even survived the evening. Another wave of fear wracked Uttaraa’s body as she imagined what Uttar would be going through. Paradoxically, imagining the battlefield also gave her a rush of adrenaline as she imagined maneuvering her bow – always her preferred weapon – from her chariot. Uttaraa turned and went in for a bath.

Conches sounded as Uttaraa emerged from her chambers, freshly clothed in a new sari. Hope filled her heart as the sound of the conches filled her ears, and she rushed down to the courtroom. She still couldn’t find Brihannala.

Shouts of joy were heard in increasing volume and frequency as Uttaraa made her way down to the courtroom. The battle-weary heroes who made up the nobility smiled awkwardly as they made their ways to their seats, remaining standing until the entry of their sovereign ruler, King Virata.

Trumpets sounded as King Virata entered, side by side with Prince Uttar, with whom he was engaged in boisterous conversation. Virata was all smiles, talking loudly, although not so loudly that Uttaraa could hear what he was saying. Uttar, meanwhile looked ill at ease, awkwardly receiving what looked like praise. Uttaraa frowned. What she would give to prove herself to her father on the battlefield and be the subject of his exuberant praise, just once in her life!

As soon as Virata had taken his seat at the throne and received a glass of water, he announced exactly what it was that had happened.

Uttaraa frowned. She was proud of her brother, to be sure, but what her father was saying just didn’t seem right. Her brother was barely a child, just around 17 years of age. He’d told her himself, multiple times, that he was scared that if he ever participated in a war, he might not be able to carry out his dharma. Out of the corner of her eye, Uttaraa saw Brihannala slip in through a side door and make her way up a staircase.

There had been some drama in the palace the previous day. Kanka, one of her father’s most trusted courtiers had disagreed with her father over a matter of pride, and had been injured when her father threw the heavy gambling dice at his forehead. He hadn’t apologized, and neither had her father, but the way she understood it, everybody had tred lightly around her father for the rest of the day.

Just as she entered the courtroom, two steps behind her father, there was a collective gasp. The throne had been shifted to accommodate four others, and all five were occupied. By Kanka, Vallabha, Granthika, a stable hand, Tantipala, a cowherd, and, of all people, Brihannala. Although she did look very different. In fact, all five were bedecked in expensive jewelry and clothes, and Kanka wore a golden crown. Next to him stood Uttaraa’s mother’s lady-in-waiting – Sairandhari.

Uttaraa watched her father carefully as his face swelled up. His cheeks reddened alarmingly, and he shouted, so loudly that most of the noblemen around him had to cover their ears:

‘I am Yudhishthira, son of Dharma, scion of the Kurus and eldest of the Pandavas. Also seated here are my brothers, Bheema, child of Vayu, Arjuna, son of Indra, and Nakula and Sahadeva, sons of the Ashwini twins. We have been masquerading at your court for the past year as various servants and I have been a member of your court, as Kanka. It is Bheema, Nakula and Sahadeva who yesterday helped you to escape death at the hands of the Trigartas, and it is Arjuna who accompanied Prince Uttar yesterday as his charioteer and single-handedly devastated the Kauravas in battle yesterday.’

The King stood, open-mouthed. He immediately realized his folly and stood in shame as he realized the implication of his actions the day before.

‘I will bow before the Pandavas, the rulers of Hastinapura, and scions of Bharatvarsha.’

Yudhishthira smiled and gestured for him to stand.

‘As a gesture of my eternal gratitude to you for recovering my wealth and saving my kingdom, O Arjuna, I must bestow upon you my daughter, Uttaraa as your bride.’

Uttaraa was horrified. Not by Arjuna, but by the association she had with him. She had spent over a year in his company, learning from him, confiding in him, and he was more of a father figure to her than somebody she would marry. She silently pleaded in her head for Arjuna to refuse.

‘My king, I cannot accept this offer myself. I have spent over a year with Uttaraa as her teacher, a relationship which is akin to that of a father and a daughter. Therefore, I cannot accept her as my wife, but if you both are willing, then I will take her as my daughter-in-law, wife of Abhimanyu.’

Uttaraa heaved a sigh of relief. Abhimanyu was around her own age. And her relationship with Arjuna would continue to be what it was.

‘So be it. If you will send for Abhimanyu, I will begin the preparations for a wedding immediately.’

Uttaraa smiled behind the cloth draped around her head. Arjun would teach her to fight, she just knew it. She bent her head and turned to walk out of the hall, leaving the Pandavas alone with a gaggle of disbelieving courtiers.