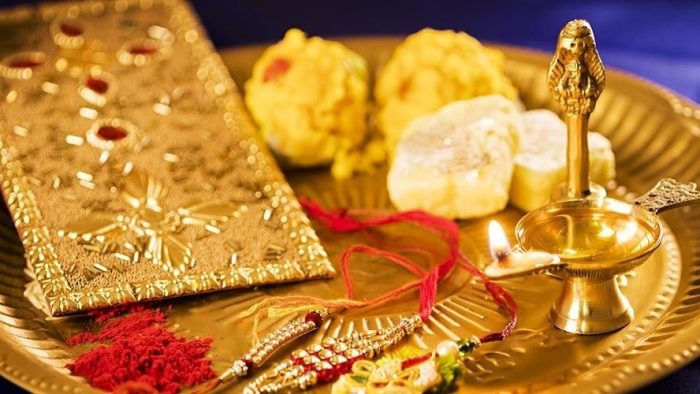 In India, on the full moon day (Purnima) of the month Shravan (around the month of August), people celebrate Rakshābandhanam or popularly known as Rakhi. On this day, sisters fasten Rakhis around the wrists of their brothers or brother-like people. The word ‘Raksha’ means protection and ‘bandhanam’ means bracelet/thread etc., thus making it a metaphor for protection. Rakshābandhan is thought to be a gesture of protection towards the females. Rakhi is a bracelet normally made out of thread or silk with special decorations. There are different traditions celebrating Rakshābandhan in various parts of India. In some places, the priest in the village fastens Rakhi to the people of the village. In some places, wives fasten Rakhi on their husband’s wrists. But predominantly sisters fasten Rakhis.

There is a special procedure instructed on how to fasten a Rakhi in ‘Dharmasindhu’ and ‘Nirnayasindhu’. 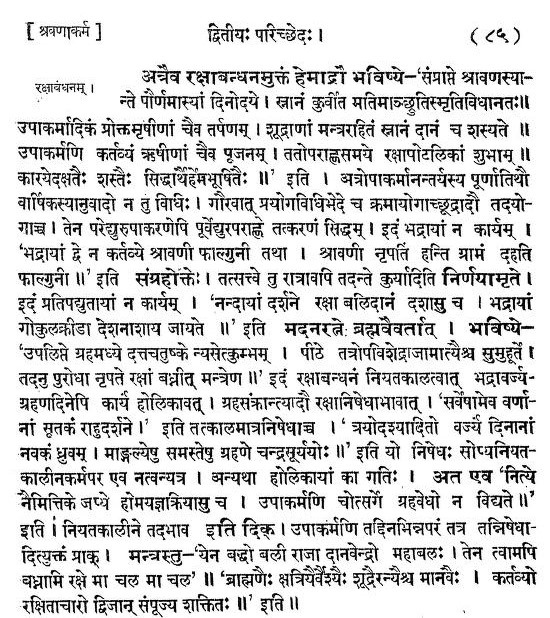 It is said that on the day of Shravan Purnima, during noon, one should fasten a Rakhi chanting the below sloka –

To know the significance of the above sloka, we must refer to the Bavishya Purana. The procedure of Rakshābandhan is mentioned in the 137th Adhyaya, in the Uttara Parva of the Bhavishya Purana.

Yudhisthira (Dharma Raja), after emerging victorious in the great war of Kurukshetra, ascends the throne of Bharata. He seeks guidance from the sage Vyasa in order to get rid of the guilt/sin that he and his family acquired by killing people, mostly his relatives in the war. Sage Vyasa asks Lord Sri Krishna to guide Yudhishthira in this regard. Then, Lord Sri Krishna enlightens Yudhishthira by instructing many Vratas (religious rites) that need to be performed on specific days. In this light of events, Lord Sri Krishna instructs Rakshābandhan to be performed on the full moon day in the month of Shavana. The legend goes like this –

Once upon a time, Bali Chakravarti the leader of Asuras, waged a war against Indra, the king of Devatas. Bali could not win against Indra in the war. Disappointed by his defeat, Bali visits his Guru Shukracharya and expresses his disappointment. Shukracharya then explains that Sachidevi, wife of Indra had fastened ‘Raksha’ around the wrist of Indra. And due to that Indra has become invincible. Hence stay put for one year, because the power of the ‘Raksha’ shall remain for a year. Agree for a pact with Indra and do not wage war on him for another year. Bali followed the instructions of his Guru. That is the significance of ‘Rakshābandhan’.

Further, Lord Sri Krishna explains what should be done on the day of Rakshābandhan. On the day of Shravana Purnima, after completing daily chores, in the noon one should fasten Rakshābandhan on the wrists chanting the above shloka. This can be performed by anyone. In this manner, one should perform Rakshābandhan every year and shall prosper for the rest of the year. By this legend, one can understand that Rakshābandhan is a festival which has roots in Puranas and can be observed by anyone with anyone. But in the course of time, there may be some historical incidents which may have turned the festival more ‘brother-sister-centric’.

By these, one can understand that the festival Rakshābandhan is not a mere cultural festival, but is an old Sanātan Dhārmic ritual. 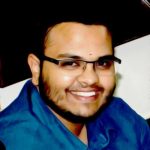