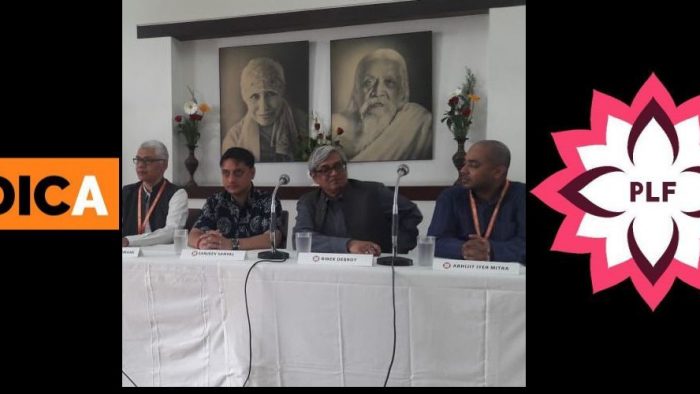 Aurobindo Ghosh conceptualized his ideas about nationhood in a pamphlet called ‘Bhavani Mandir’. Bhavani, he says, is Shakti, that infinite energy which turns the wheels of the world for eternity. She is Durga, Laxmi, Kali and India is the Shakti of its millions. It is not a piece of land or a figure of speech or a figment of someone’s imagination. India is the collective energy or Shakti of her millions put together. Just as Mahishasura Mardini wielded together the power of the Gods, in a similar way Bharat Shakti, when fully realized, is the energy of India’s people.

The second day of the Pondicherry Literature Festival commenced with a panel discussion on the title of the Lit Fest – “Bharat Shakti”, with a panel comprising of Sanjeev Sanyal, Bibek Debroy and Abhijit Iyer Mitra. Gautam Chikarmane moderated the discussion.

Chikarmane began the discussion by looking at Bharat Shakti from three angles – Security, Economics and Civilization. What must be India’s approach to development and strength when viewed from these perspectives?

Abhijit Iyer Mitra opined that security should focus on the human factor and not just the technological aspects. There was a need to clearly identify the enemies of the nation and then invest in human capital in that direction. Merely thinking in terms of technological prowess without giving any thought to the soldier on the battlefield is actually a detrimental approach. Unfortunately, Iyer Mitra said , the former has been regularly adopted by India for the past seventy years or more. To truly realize the potential of Bharat Shakti on the battlefield, it is necessary to modernize and invest in the human factor in the security domain.

Sanjeev Sanyal then spoke about the economic side – for much of Independent India’s history, Her economic strengths were shackled due to the prevailing socialism of the day. The dominant mindset rewarded freeloaders and mediocrity. India’s poverty had become a ready excuse for a never ending race to the bottom – a sad commentary on a nation newly free and looking to realize her full potential! But things began to change in the 90s, with the help of leaders like AB Vajpayee. No longer would India be a by word for mediocrity and low quality. It had the potential and the talent to build world class infrastructure and industries – so why then wallow in self pity and surround yourself with shoddiness? India’s power had forever been about pacifist soft power – but it was only with the hard power of the economy that her voice began to be heard in the world. Thus, Bharat Shakti was finally awakening in the most important field of economics.

The discussion then moved towards towards the civilizational part of Bharat Shakti. The role of the Raja in ancient times. It is pertinent to note, as mentioned by Bibek Debroy and Sanjeev Sanyal, that a Raja in ancient India had very limited duties – Defence and maintaining Law and Order. Everything else was managed by the individual and the community. No labyrinthine bureaucracy existed. The focus of the king was on providing “good governance” and not “ruling” over a people. Similarly, Bharat Shakti manifests itself in the various debates found across the scriptures – where many topics were discussed threadbare, revealing an open-mindedness seldom found elsewhere in the world. Sanyal spoke of the administration at the time of Kautilya (where the role of ruler was minimal) and administration in the time of Ashoka (where it became concentrated in the hands of one person).

Expectedly ,the discussion moved to how little we know of India’s heritage. This intellectual deracination has colonial roots. The British carefully cultivated a mindset amongst the English educated Indian middle and upper classes that Indian Civilization had nothing worthwhile to contribute to the world. It created an entire army of brown sahibs who detested the vast store of knowledge and intellect that was Bharat Shakti! This mindset has not yet disappeared, and we can witness it in the blind aping of western ideas without giving much thought to its application in India!

The panel then moved on to legislation and the advantages and pitfalls thereof. It was indeed amazing to learn that hundreds of nineteenth century laws were still applicable right into the twenty first century! How could the soul of a nation survive on a bunch of laws which had held it in subjugation at one point? But a word of caution also followed – some of the laws amended by Independent India were worse than their erstwhile British version!

The audience was completely immersed in the discussion and didn’t seem to want it to end. But unfortunately, time constraints came into play. The discussion closed with a commentary on Rama Rajya. It essentially meant that the law applies equally from king to beggar. Natural justice versus law was also touched upon.

This then is Bharat Shakti – the full potential of her security apparatus, economic strength and civilizational robustness. It is this shakti, when fully bloomed will make India earn the respect it deserves in the world.