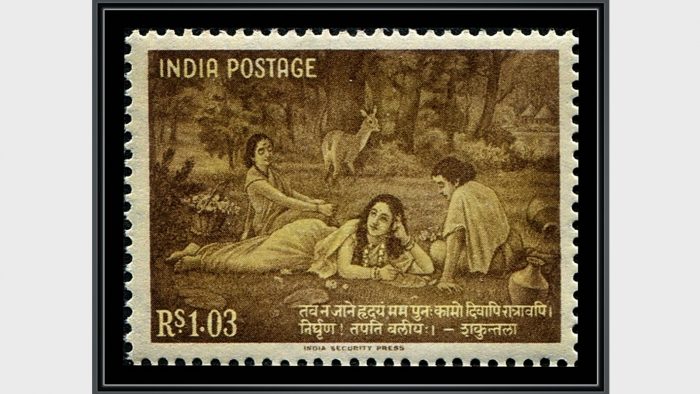 The soul of an age is mirrored in this single mind.

The life & personality of Kalidasa, the epoch in which he lived and wrote, the development of his poetical genius as evidenced by the order of his works, are all lost in a thick cloud of uncertainty and oblivion. It was once thought an established fact that he lived & wrote in the 6th. century at the court of Harsha Vikramaditya, the Conqueror of the Scythians. That position is now much assailed, and some would place him in the third or fourth century; others see ground to follow popular tradition in making him a contemporary of Virgil, if not of Lucretius. The exact date matters little. It is enough that we see and in Kalidasa’s poetry the richest bloom and perfect expression of the long classical afternoon of Indian civilisation. The soul of an age is mirrored in this single mind. It was an age when the Indian world after seeking God through the spirit and through action turned to seek Him through the activity of the senses, an age therefore of infinite life, colour and splendour, an age of brilliant painting and architecture, wide learning, complex culture, developing sciences; an age of great empires and luxurious courts and cities; an age, above all, in which the physical beauty and grace of woman dominated the minds and imaginations of men.

The spirit of the times pulses through all Kalidasa s poetry. His pages are often ablaze with its light & colour, often pregnant, sometimes indeed overweighted with its rich and manifold learning, its keen pleasure in every phase and aspect of life fills them with a various vividness and infnite richness of matter. Language & verse thrill with the rustling of woman s raiment, the scent of her cosmetics, the tinkling and lustre of her ornaments; they are sinuous with the swaying grace of her motion or subtle with the delicate charm of her ways and words; the beauty & pleasure of her body possesses & besieges the poet’s imagination. And behind the luxurious ease and sensuousness of court life we hear the clash of arms and glimpse the great & energetic motions of statesmanship and diplomacy. From pages heavy with the obsession of the senses, the delight of the eye and the lust of the flesh we turn to others sweet and gracious with the virgin purity of the woodlands; the same poem which gives us a glowing picture of the luxurious voluptuousness of courts gives us also the sternest philosophy and the most vigorous expression of the noble, aspiring morality proper to an active and heroic age. His wonderful visualising power turns whole cantos into a series of almost physically vivid pictures. All his senses are on the alert, his ear for music and the sweetness of words and laughter, thunder, the cries of birds; his sense of smell for the scent of flowers, incense, the perfumes in women s attire, his sense of touch for every tactual pleasure, his mind for all subtlety of knowledge and all possible delicacies, richnesses, grandeurs in the world of thought. He will miss nothing; lose no joy of sense or intellect, throw away no chance of feeling himself alive.

In Europe the Shakuntala is the one poem of Kalidasa universally known and appreciated. In India the Meghdutam has gone even nearer home to the national imagination. For this there is good reason. It is, essentially and above all, the poem of India, the poem of the country, its soil and its scenes, its thoughts & its atmosphere. No one who has not lived the life of India, till it has become part of his breathing and woven in with every thread of his imagination, can fully appreciate the poem. If one does not know the charm of its hills, the scent of its flowers, the beauty of its skies, [the] glowing sacredness of its rivers with all the phases & emotions of an Indian river’s life, if one cannot distinguish & thrill to the touch of its various winds, if one cannot clothe its local places with ancient historic & mythical association or people them with the strange host of beautiful & weird figures & faces which the imagination of its people has created, if one does not recreate for himself the ancient splendours of its cities, the sense of peace & infinity in its temples & hermitages and the simple sweetness of its rural life, for him the
Meghaduta offers only its shell. But all these, everything that is redolent of India, the visible, material, sensuous India has been fused and poured into one perfect mould by the genius of this supreme artist. And then as if more utterly to ensnare the imagination of his race, after showing them the beautiful scenes, sights, sounds,  scents, the sacred & cherished places, the historic cities of their country as they are or alas as they were he lifts these cherished things into a magic world, bathes them in an immortal beauty. Ullaca, the city without death, is but Kalidasa’s beloved Ujjaini taken up into the clouds & transformed into a seat of ideal bliss & loveliness. In the same moment he strikes straight home at one of the most deep seated feelings in human nature, its repining at the shortness of life & the more tragic shortness of youth, and imaginative dream of an eternal beauty, youth & joy. These he satisfies and turns from a source of unrest into a new source of pleasure & joy, showing himself the great poet as well as the delicate artist.

An excerpt from Sri Aurobindo’s writings on the great classical poet Kalidasa.