Marathas And Bundelkhand – Part I: Chhatrapati Shivaji And The Rise Of Chhatrasal Bundela 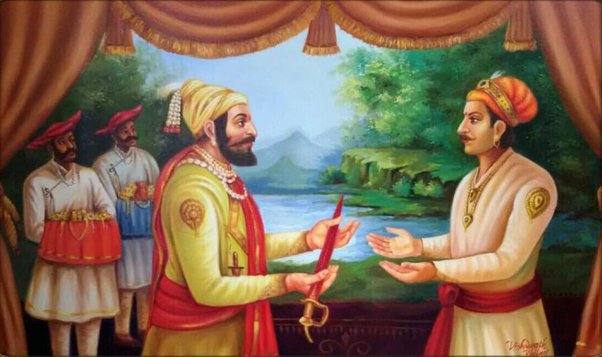 These words by Subhadra Kumari Chauhan have immortalised the tale of Rani Laxmibai. But the Rani of Jhansi was named Manikarnika Tambe prior to her marriage to Raghunath Hari Newalkar, the ruler of Jhansi. But how did Marathi surnames like Tambe and Newalkar end up being so important in faraway Bundelkhand? Why do the Bundelas till date hold Chhatrapati Shivaji, Bajirao and of course Rani Laxmibai in high regard?

The answer to this is to be found in a nearly two hundred year long history, beginning in the 1660s, when Chhatrasal Bundela met Chhatrapati Shivaji.

Chhatrasal Bundela, the son of Champat Rai, a Bundela chief, was born in 1649 AD. Champat Rai had already risen against the Mughal Empire in the 1640s and had fought a long war spanning over fifteen years. His son Chhatrasal was only twelve years old, when Aurangzeb attacked Champat Rai and the latter was killed in one of the ensuing battles at Sahre in Malwa. The incident left an indelible mark on Chhatrasal Bundela.

He was present in the famous siege of Purandar, (May 1665) fighting among the troops of Mirza Raje Jai Singh. It was around this time that he began to realise that his support of Aurangzeb was morally incorrect, and that Chhatrapati Shivaji’s stance was the correct one. Whether he met Shivaji during this siege is not certain. Nevertheless, Mirza Raje Jai Singh praised his bravery and recommended his name to Aurangzeb, who happily granted Chhatrasal, a mansab of 250. Chhatrasal Bundela was then sent with Diler Khan to attack Deogarh. The young Bundela, his conscience pricking him to take up the sword against the Mughals rather than for them, escaped from the camp and made his way to the Deccan, where he met Shivaji.

The meeting is a monumental event in India’s history. It laid the foundations of Hindu rule in Bundelkhand – a pivotal and strategically very important province.

The content of what Maharaja Chhatrasal said to Shivaji is brought out beautifully by Lal Kavi (actual name Gorelal Purohit) in Chhatraprakash.

Loosely translated it means: “My father (Champat Rai) ravaged the province and rose against the Turks (Mughals). But his three sons have not been able to live up to his ideals. Only Shivaji has been able to follow what is correct and do what his heart says. Eight rulers have been defeated by him.

“I am much inspired by these deeds of Shivaji. Hence I want to meet Shivaji and obey whatever is asked of him.”

Chhatrasal Bundela intended to join the growing armies of Chhatrapati Shivaji, but Shivaji gave a beautiful reply, in which he tried to stir Chhatrasal’s patriotic feelings for the liberation of his own Bundelkhand from tyrannical Mughal rule. He wanted Chhatrasal Bundela to free and work for the prosperity of his rayat in Bundelkhand, rather than just be a sardar in the Maratha army in the Deccan.

Translation: Chhatrasal, you are like the crown jewel of kshatriyas. You should fight and win back your lands and rule over them. I am not different than you. Fight and defeat the Mughals. Make their armies run away. Do not trust the Turkis (Mughals). You are a lion, and the Turks are elephants. They are untrustworthy, you go to meet them, they will put hurdles in front.

Chhatrasal Bundela started by capturing a few weakly guarded Mughal outposts in eastern Bundelkhand, and as a result, his followers and soldiers grew in number. He then attacked the larger Mughal forts such as ones at Gwalior, Sironj, Chitrakut, Mahoba, Kalinjar, etc. Between the years 1668 and 1678, more than a dozen battles were fought by Chhatrasal Bundela against Mughal faujdars, such as Randaullah Khan, Hashim Khan, Fidai Khan, etc. Save one, he emerged victorious in each and every one of them.

A Mughal mansabdar named Jaswant Singh was then sent to subdue Chhatrasal Bundela, and he did succeed in defeating Bundela and make him submit to Aurangzeb’s suzerainty. But by 1686, Chhatrasal Bundela was once again attacking the Mughals in Bundelkhand.

By this time the Maratha – Mughal War was in full bloom, and the cream of the Mughal army, along with the emperor himself, was away in the Deccan. Maharaja Chhatrasal Bundela made full use of this god given opportunity and ferociously attacked the Mughals.

Although in 1696, he once again accepted the superiority of Aurangzeb, a mere four years later he was once again on the battlefield – fighting against Mughal soldiers. The fort of Kalinjar was soon captured, as were large parts of Banda, Hamirpur, Jhansi, Jalaun, Kalpi etc. (1702, 1703). In fact at one point his influence stretched to the Narmada itself.

Nemaji Shinde, ancestor of the famous Shindes or Scindias of Gwalior, ravaged Mughal ruled Malwa with help from Chhatrasal Bundela! Thus, continuing the thread picked up forty years ago!

At the time of Aurangzeb’s death in 1707, Maharaja Chhatrasal Bundela governed a huge tract of land in Bundelkhand, comprising of various forts such as Sagar, Kalpi, Jhansi, Orccha, Sironj, Chitrakut etc. He also held the huge diamond mines at Panna, which brought him great wealth.

The influence of Prannathji Maharaj:

Maharaja Chhatrasal Bundela met his guru Prannathji at Mau near Panna in 1683. A parallel can be seen between this and Chhatrapati Shivaji meeting Samarth Ramdas. Meeting between Vidyanaranya Swami and Harihar I (founder of Vijayanagar Empire) is another similar example. Maharaja Chhatrasal belonged to the Pranami Sampraday as a result of the influence of Swami Prannathji and his worldview, as also his views regarding religion.

In 1707 Aurangzeb died, bringing to an end, the long war in the Deccan. The Mughal Empire collapsed, unable to hold itself together. And Maharaja Chhatrasal Bundela reigned over his kingdom, which he had so painstakingly gained from the Mughals.

It would be another twenty years before the Marathas found themselves once again in the thick of politics of Bundelkhand. And at the centre of the storm would be the Peshwa himself – Bajirao Ballal.

4. Life and Times of Chhatrasal Bundela by B.D Gupta