Lessons From The Mahabharata: Karna, Krishna, and the Fear of Abandonment 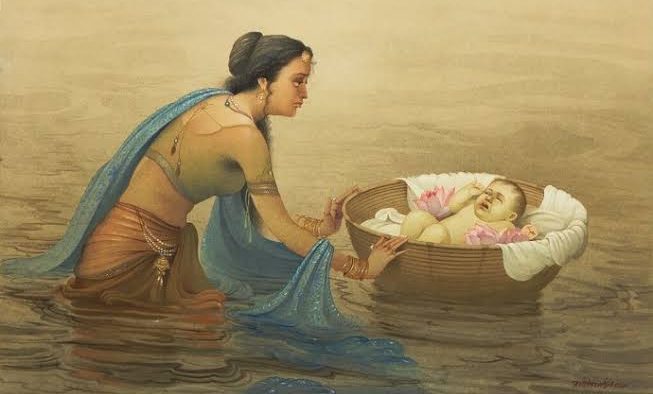 In the previous article we saw how Karna’s life could be viewed as a cautionary tale against distractions. Let us now look into another aspect of Karna’s life.

Karna was abandoned almost immediately after his birth. His mother, Kunti, “flung” (Chap. 104, Adi Parva) him into the river, where he was found by Adhiratha, adopted by his wife Radha, and grew up as the son of a charioteer. He later became the king of Anga, the lifelong friend of Duryodhana and a mortal enemy of Arjuna.

A question comes to mind – why did Kunti need to fling her first-born son into the water? It was because of a boon granted by the “fearsome” sage, Durvasa. His boon to Kunti was thus – “Whichever gods, you summon through the use of this mantra, will grant you sons through their grace.” Durvasa had granted this boon to Kunti because “he knew that she would face the dharma that is indicated for times of distress.” Once, Kunti had this boon, she became “curious.” Curiosity led her to invoke the boon, summon Arka (the sun god), who placed an embryo in her womb. Thus, Karna was born, and almost immediately thereafter, abandoned by his mother.

Being abandoned by his mother was something that must have affected Karna. How it shaped his life and personality is of course a matter that many have hypothesized about over thousands of years. We have seen how Karna’s life was marked by a series of distractions that marked the difference between him and Arjuna. Whereas Arjuna had Krishna as his charioteer during the eighteen days of the Mahabharata – an image that draws comparison, inevitably to the Katha Upanishad – Karna had to settle for Shalya. The difference between Krishna and Shalya on the one hand and between Arjuna and Karna was both literal and metaphorical.

In some ways, can one not argue that Karna’s predilection towards distraction was an unfortunate gift from his mother? Was not Kunti’s action of summoning Tapana (the sun god) a rash one, driven perhaps as much by the impulse of youth as by the inability to handle such power? In chapter 143 of the Udyoga Parva (in the Karna-Upanivada Upa Parva), she laments, “Thinking about that brahmana [Durvasa] and bowing down before him, I was overcome by curiosity and behaved like a child.” For, was not the power to summon a god, any god, a fearful power that would have tested even the mightiest of people? Perhaps, it was the rashness of youth, perhaps it was fate. Perhaps it was curiosity. We can only speculate.

Add to this, the fact that Kunti had herself been given away by her father Shurasen to Kuntibhoj. Wasn’t then abandonment in the destiny of both Kunti and Karna? Kunti was abandoned, in a manner of speaking, by her father, and Karna was abandoned by his mother? Kunti harboured some anger and resentment at this treatment, and she confessed as much to Krishna, “While I was still playing as a child, with a ball in my hands, my father gave me away to Kuntibhoja, like a wicked man gives away riches. I was given to Kuntibhoja, a friend, as a mark of great-souled friendship. O scorcher of enemies! I have been deceived by my father and my fathers-in-law.” How would Karna respond to Kunti, when they met, for the first and last time, as mother and son? We will soon see.

Perhaps, the embedded memory of the consequence of his mother’s distraction is what wrote Karna’s destiny. The fear of abandonment led him to stay closely bonded with Duryodhana; a bond that would not break even when pressed upon by Keshava and then his mother. Many years later, war had become inevitable. Karna, now the King of Anga, found himself courted by Krishna. Krishna had made the last attempt at peace. He had gone to Hastinapura to prevent the terrible fratricidal war that loomed, and failed. That is another story in itself, though.

How serious Krishna was about preventing war can be gauged from how assiduously he tried to woo Karna over to the Pandava camp. Not only did he reveal to Karna the secret of his birth – that he was indeed the eldest Pandava – but also offered the Pandava throne to him: “I will myself instate you as king. … Yudhishthira… will ascend the chariot behind you and hold a white umbrella. … Bhimasena will hold a giant white umbrella above your head when you are consecrated… I will myself follow you and so will all the Andhakas, Vrishnis and Dasharhas.”

Krishna also tried to tempt Karna. He asked him a pointed question – “O Karna! Are you not tempted by the offer of a kingdom? Do you not desire to rule the earth that I will give to you?”
Not only did Krishna offer the throne to Karna, but he also made it clear that Draupadi, as the wife of the Pandavas, would be Karna’s wife also!

Karna refused all – temptations, reasoning, fear, and the revelation of the secret of his birth.
He offered several reasons for doing so – his loyalty to Duryodhana (“I have obtained refuge with Duryodhana”), his love for his adopted parents, who accepted him (“O Madhava! She [Radha] accepted my urine and excrement”), whereas his mother had abandoned him – “Kunti did not think of my welfare and cast me out as one undesired”), and his desire to uphold dharma. Were he to accept the crown from Krishna, he would hand it over to Duryodhana, out of his friendship and sense of debt.

He calmly accepted the inevitability of the battle that loomed – “O Hrishikesha! I know that where dharma exists, victory exists there.” Karna also used his meeting with Krishna to lighten a load that had been on his heart for many years, and confessed – “O Krishna! I regret the harsh words I used against the Pandavas to please Dhritarashtra’s son. I am now tormented by the deed.”

Karna also made this important request to Krishna, “Always keep this conversation between us secret.” He even questioned why Krishna was telling him all this, “Knowing everything, why did you wish to confuse me?” Karna ended his secret meeting with Krishna by wishing- “If we remain alive, we may perhaps see you again after this great battle. … O Krishna! Otherwise, we will certainly meet in heaven.” The two departed, after “Karna embraced Madhava tightly.” The meeting between Karna and Kunti was even more poignant, and it is difficult to find a more fascinating study of human emotions, in all their frailty and faults.

Karna would not abandon Duryodhana. Such was the bond of friendship between the two. Such was the hostility Karna harboured for Arjuna. Or, such was Karna’s fear of abandonment that he could not bring himself to do to Duryodhana, what had been done to him by his mother. The fear of losing what he had, turned out to be far greater than winning what Krishna promised him.

(The article was earlier published on indiafacts.org)