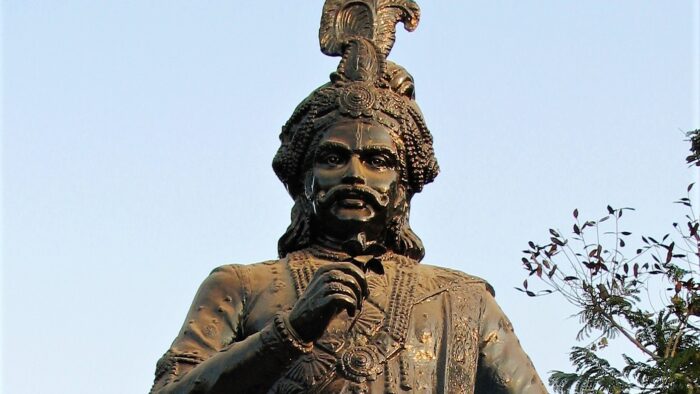 Sri Krishna Deva Raya was perhaps the tallest ruler produced by South India in the last thousand years. His rule, which was marked by victories, wealth, and prosperity, was a high point in the history of the Vijayanagara Empire. Apart from being a renowned warrior and an able administrator, he was also an excellent writer, and a patron of arts and culture. In his reign, Vijayanagara was not only militarily and politically powerful, but was also a thriving center for learning and arts. It was where all the writers, poets, artistes, and sculptors flocked to produce some of the finest works ever. While his reign is described often as the Golden Age of Telugu Literature, equal patronage was also given to Kannada, Tamil, and Sanskrit authors and writers. Krishna Deva Raya himself was a polyglot, fluent in Telugu, Kannada, Sanskrit, and Tuluva. He was praised as “Narasimha Krishna Deva Raya” hearing whose name the Turks quivered and elephants ran away, by one of his poets Mukku Timanna.

One of the most influential men of letters in his reign, was the great Madhava scholar Vyasathirtha, who, along with Madhwacharya and Jayathirtha, was one of the three spiritual lights or Muni trayam of Dwaita Vedanta philosophy. Along with Jayathirtha, he was instrumental in systematizing Dwaita into a school of thought and was also the founder of the Haridasa cult. Respected even by his opponents, he had a very clear understanding and exposition of various schools of philosophy and was a master of debate and logic. Hailing from Bannur in Mysore district, he studied for a very long time under Shripadaraja at Mulbagal. He was a regular at the Vijayanagara court of Saluva Narasimha when he was at Chandragiri, and was looking after the Tirumala temple then. On the invitation of Saluva Narasimha, he moved to Hampi around 1498, and when Sri Krishna Deva Raya ascended the throne, in 1509, his influence grew even more. Sri Krishna Deva Raya considered him his Kuladevata, and Rajaguru. He sought his blessings before the Battle of Raichur, and listened to his preachings every day. He was the author of many memorable works like Nyayamritam on metaphysics, Tarkatandava on Logic. Among other Kannada poets patronized by Sri Krishna Deva Raya were Mallanaraya, author of Veera Saivamruta and Bhava Chinta Ratna, Chattu Vitalanatha who wrote Bhagavata and Timmana Kavi, who eulogized him in Krishna Raya Bharata.

The emperor himself was a renowned writer, who wrote Madalasa Charita, Satyavadu Parinaya, Rasamanjari and Jambavati Kalyana all in Sanskrit. Apparently there is a very interesting anecdote, related to Sri Krishna Deva Raya’s Amukta Malyada, the work he wrote in Telugu. During the Kalinga campaign in 1516, having conquered Kondavidu, Kondapalli, he came to know of the glory of Andhra Maha Vishnu, and his temple located at Srikakulam in Krishna (not to be confused with the district called Srikakulam). The Andhra Maha Vishnu was a legendary warrior of ancient times, whom many believed to be the embodiment or Amsa of Lord Vishnu, and they built a temple in his honor at Srikakulam. During his stay at Srikakulam village, Krishna Deva Raya had performed the Ekadasi Vratam, and then Andhra Maha Vishnu had appeared in his dream.

Andhra Vishnu came to me in my dream. His body was a radiant black, blacker than the rain cloud. His eyes wide and sparkling, put the lotus to shame. He was clothed in the best golden silk, finer still than the down on his eagle’s wings. The red sunrise is pale compared to ruby on his chest.

Andhra Vishnu ordered Sri Krishna Deva Raya in his dream to write the story of his wedding with Andal, his devotee at Sri Rangam in Telugu. He is said to have told him that since he is Telugu Vallabhunda (the ruler of the Telugus), it should be written in Telugu, and he also gave the reasoning as shown.

“If you ask me why in Telugu, I am the Telugu Ruler of the Telugu Land, All the kings serving under you being Telugu, you shall know that Telugu is the greatest of all the languages here”.

What it meant was that since he would be ruling over a large part of Andhra region, where his subjects and feudatories would be speaking in Telugu, it would be better if he wrote the work in Telugu itself. And this is how Sri Krishna Deva Raya, came to write Amukta Malyada, his magnum opus, detailing the separation and pinging by Andal, also considered one of the 12 Alwars, for her lover, Lord Vishnu. The physical beauty of Andal is described well in this work, as well as usage of Sringara as a means to spirituality and union with the divine.

In Indian mythology, the Ashta Diggajas were the eight elephants– Pundareeka, Vaamana, Kumuda, Anjana, Pushpadanta, Sarwabhouma, Suprateeka and the most famous of them all, Indra’s elephant Airawata– which were believed to have held up the earth in 8 directions. The Ashta Diggajas in Sri Krishnadeva Raya’s court were the eight great poets and writers, who were amongst his close circle, and with whom the king used to congregate daily. Their court was also called as the Bhuvana Vijayamu (Conquest of the World) and these 8 poets each had their own individual style, totally different from each other.

Allasani Peddana was the foremost of the Ashta Diggajas, hailing from a village in Anantapur district. He was revered as Andhra Kavita Pitamaha (Grandfather of Telugu poetry) and also as Peddannamatya, as he was a senior minister too. He wrote the first major Prabhanda, a form of fictional poetry, and Sri Krishna Deva Raya himself, would carry the palanquin in which he was seated. Such was Sri Krishna Deva Raya’s reverence for Allasani Peddanna that once, he bent down, and himself placed the Ganda Pendaram (a large golden bracelet) around Peddanna’s feet, to honor him. Allasani also had the privilege of mounting the royal elephants, the only court poet to do so. When Sri Krishna Deva Raya passed away, Allasani is believed to have mourned “Atti Krishna Rayala thoti divikegaleka brathiki yundithi jeevatchavamba naguchu” (I have become a living dead, why have I not gone to the heaven along with the Rayala”. His most famous work till date is the Manu Charitra, based on a short story from the Markandeya Purana, about the 2nd Manu, Pravarakhya, and it has been classified among the Pancha Kavyas of Telugu literature, others being Panduranga Mahatyam by Tenali Ramakrishna, Amukta Malyada by Sri Krishna Deva Raya, Vasu Charitra by Rama Raja Bhushana and Vijaya Vilasamu by Chemakura Venkata Kavi.

Nandi Timmana hailed from Anantapur district, and entered the court, when Sri Krishna Deva Raya married Tirumala Devi and bought her to Vijayanagara. Despite being a Saiva, he also wrote books on Vaishnavism, and he was called as Mukku Timmanna, because of a very beautiful poem he wrote on the Nose (Mukku). Compared to the complex and verbose style of writing of Allasani Peddanna, Timanna’s poems used a simpler language, which were understood even by laymen. It is for this reason that his poems are often referred to as Mukku Timmanna Muddu Paluk (Sweet words of Mukku Timmana). Parijatapaharanam, dealing with Satyabhama wanting the Parijata plant, and Krishna going to take it, was his most famous work. He also did an experiment called Chitra Kavita (magical poems), where all 4 lines of a poem could be read from either direction.

Madayagari Mallanna also hailed from Rayalaseema region, though his exact birthplace is not known. He often accompanied Sri Krishna Deva Raya in his military travels. He would dedicate his works to Krishnadeva Raya’s famous minister, Appaji, aka Saluva Timmarasu. His most famous work is Rajashekhara Charitamu, based on the military and romantic conquests of a legendary ruler of Avanti kingdom.

Ayyalaraju Ramabhadrudu, hailed from Kadapa, and was also called Pillala Ramabhadrudu. His most famous work was Ramabhudayamu and he also translated one of Sri Krishnna Deva Raya’s writings into Telugu as Sakala Katha Sara Sangraham.

Pingali Surana, is believed to have hailed from Kurnool, though his ancestors were from the village of the same name in Krishna district. One of his most famous works is the Kalapurnodayam (Art in full bloom), where he makes use of techniques like flashbacks and character transformation, considered a revolutionary work during his time. Another famous work of his was Raghava Pandaveeyam, which references stories from Ramayana and Mahabharata simultaneously, and has a double entendre style. His other famous works are Garuda Puranam (written in Prabhandha style) and Prabhavati Pradyumnamu (about Pradyumna son of Lord Krishna and his love with Prabhavati).

Ramarajubhushanudu, was from Kadapa district, and he was an apprentice of Allasani Peddana too for some time. Apart from being a great poet, he was also a musician of note, and played the Veena. He got this name because he was considered as a jewel (Bhushanam) of the court. But, his real name was Bhattu Murthi, One of his notable works was Vasu Charitramu notable for its use of slesha or double entendre, another such work was Harischandra Nalopakanam, where he described the story of great kings Harischandra and Nala. Other popular works of his are Kavyalankarasangrahamu- a work on Telugu grammar and Vasucharitramu.

Tenali Ramakrishna, was in a league of his own. He was both a Kavi and a Vidushaka (the court jester), who was known for his razor sharp wit, intellect, and humor. While he is more popular for his humor, and also as a jester, he was also a writer of note. His Panduranga Mahatyam was one of the Pancha Maha Kavyas, and described the legend of Panduranga, a form of Lord Vishnu. His name comes from Tenali a place in Guntur district, from where he had come, and he was a devout Shaivite. His other famous works were Udhbataradhya Charitamu about the great Shaivite preacher Udhbhata and also explores the sanctity of Kashi. He is also popular in folklore with numerous stories based on him that extoll his wit, sense of humor, and the close relationship he had with Sri Krishna Deva Raya. In fact, along with Timmarasu and Allasani, he was considered as one of the members of Sri Krishna Deva Raya’s inner circle.

Sri Krishna Deva Raya’s reign was the high point of Telugu literature, and it gave birth to a new style called Prabhandha, which took the original stories from ancient literature and added their own narration. While earlier poets like Tikkana and Potana had translated the Mahabharata and Bhagavatam as it is, the Prabhandha style saw poets adding small obscure stories, some minor plots, and rewriting them. All three genres of the Prabhandham styl– Prakhyatam, Utpadyam and Misramam– were adopted during this period.

(This article was first published by IndiaFacts in 2016)