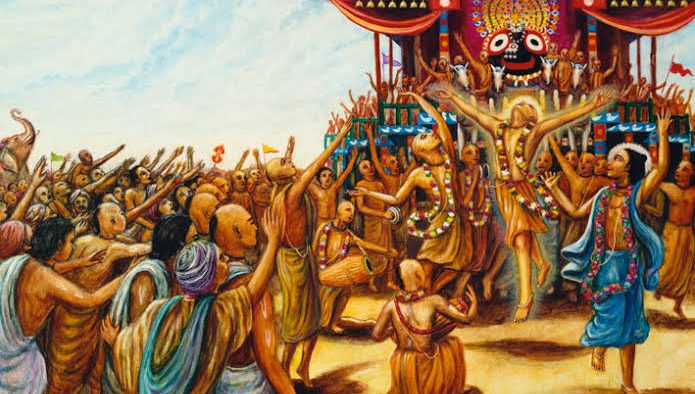 The Jagannath is the ever transitional Brahma. He infuses Himself in the ocean of mankind during the Ratha Yatra and diffuses His blessings upon His universal creation irrespective of any prejudice whatsoever. He represents momentum. His journey validates the cycle of life and confirms that every ending has a new beginning. The return car carnival of the Gods is popularly known as the ‘Bahuda Yatra’ and falls on the Dashami – 10th day of Asadha Shukla Paksha. The day marks Shri Jagannath’s progression towards the Srimandira and also the end of His stay at the Gundicha.  In the return car festival, he moves from the Janma vedi –the birthplace at Gundicha Ghara to the Karma Bedi- Workplace at Srimandira.

The above lines convey the power behind the evolution of God into various forms at various places. It means that the one who knows the transcendental nature of His appearance and activities does not, upon leaving the body, take birth again in this material world, but attains His eternal abode.

A day before the Bahuda Yatra on Ashada Shukla Navami, the Gods give their last audience to the devotees in the Adapa Mandapa of the Gundicha Gruha. A special aarati is performed in-between the Sandhya Dhupa and the Rasa Leela which is popular as the Triad’s Sandhya Darshan.  It is considered as the last darshan, the devotees get on the Janma mandapa before the Triad moves into their chariots the very next day for the onward journey.

The above lines convey the importance of viewing the Triad on the Adapa Mandapa at Gundicha. The lines mean that seeing Lord Jagannath at the Adapa mandapa only once is equal to viewing him in the main temple a thousand. An audience of Him at the Gundicha allows salvation.

The legend behind this Navami Sandhya darshan at the Gundicha is linked to the creation of the idols. It is believed that an Ashwa Medha Yajna with thousand horses was conducted inside the Gundicha temple by King Indradyumna. From the Yajna, Lord Nurasingha showed up and made a prophecy about a piece of timber that would be found floating in the sea. Lord Nurashingha proclaimed that the piece of timber should be considered Daru Brahma, and should be installed as Jagannath. The idol of the Yajna Nurasingha was astonishingly unusual. The upper part was that of a woman, the middle part resembled Balabhadra and then followed a black portion that resembled Jagannath. This was the first form of the Triad ever seen. The Yajna was followed by a Brahmana Bhojana in which King Indradyuman donated ten thousand cows after feeding as many Brahman’s. After the donation, Raja Indraduymna invited Shabara Raj Biswabasu, Brahmana Bidyapati , Lord Brahma, and queen Gundicha to sit together and dine on one plate along with him. By doing so King Indradyumna dissolved the social and gender boundaries. Since that day, during the evening hours, post the Navami Sandhya Darshana on the Yajna Bedi, it is a ritual to sit together and consume the Yangna Charu Bhogo and remember the creation of the Triad at the Gundich.

The above lines stress the darshan timings of Jagannath during the night hours. It says that by getting a darshan of the Gods during the day hours one gathers blessings but the same increases by ten times if the darshan is done at night.

The next day declares the end of The Lord’s annual sojourn at The Gundicha. The exit rituals start from the night before with the Senapata Lagi. The next day the exit rituals begin early in the morning, much similar to the way it was done during the Ratha Yatra day. The rituals at the Gundicha temple are performed by dedicated Sevayatas, before the Triad board their respective chariot’s for Srimandira through the Nakachana Dwara. Post the departure of the Trinity from the Gundicha, the temple remains vacant throughout the year until the next Ratha Yatra. It is said that a Bamana Bhoota, understood to be the Bamana spirit of Shri Jagannatha,   is left inside the Gundicha with Mahaprasad to feed on. This Divine Spirit is entrusted with the task of taking care of the Gundicha Gruha until the next Ratha Yatra of the Chaturdha Murti.

The Chariot of Shri Balabhadra, Devi Subhadra, and Shri Jagannath start rolling towards the Srimandira accompanied to the Hari Bolo and Jai Jagannath call of devotees while pulling them. The entire atmosphere is filled with the sound of gongs, trumpets, and kirtans. The Chariot of Shri Balabhadra – Tala Dhwaja and the Chariot of Devi Subhadra- Darpa Dalana keep on moving towards the Srimandira. Shri Jagannath’s Nandighosha has some important stopovers en-route.

It is believed that during the Ratha Yatra Shri Jagannath visits His aunty who is known as Mausima that translates to mother’s sister. On the return journey, Shri Jagannath makes a stopover at His aunt, Ma Ardhasini’s abode situated almost on the midway of the Grand Road, at Balagandi square. Purana has it that once when Puri was flooded Mausima drank half the seawater and saved Puri from drowning. 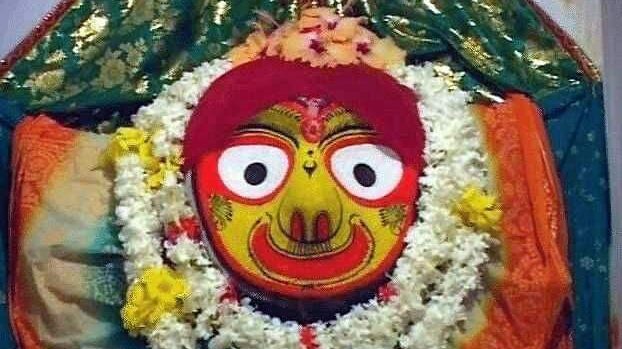 That day onwards Mausima came to be known as ‘ Ma Ardhasini’ and a dedicated temple was built in her honor. Legend also has it that after Lord Jagannath retires at night post the Bada Shringara ritual, Ma Ardhasini along with Kapalamochana Shiva executes their role of nocturnal guardians of Puri.

Every year during Bahuda, the Nandighosa chariot of Shri Jagannath halts at the Mausima temple where He is offered the Podo Pitha- A rice cake made especially for the Lord by His aunt. He savors’ the Poda-pitha and moves on towards His final destination.

The fury of Goddess Lakshmi that She expressed on Hera Panchami at Gundich still continues. Her anger tantrums show Her urge to attract importance from her husband Shri Jagannath. Goddess Lakshmi joins the Manaviya Leela of Shri Jagannath adding the female sentiment to a human-like realistic act.

As the Nandighosa nears the Srimandira, Goddess Mahalakshmi is informed about Lord Jagannath’s arrival. Goddess Lakshmi is elated, she looks forward to catching a glimpse of Her Lord. Her assistants take the Subarna Lakshmi idol in a palanquin to the Chahani Mandapa – The viewing Podium of the Srimandira. Goddess Mahalakshmi steals a quick look at the Lord who is parked on His chariot near the Gajapati Maharaja’s palace. The exchange of the eye to eye gaze is locally called the Chahani Melana –Meeting through the eyes.

Her sevayats are aware of Goddess Lakshmi’s anxiety. Goddess Mahalakshmi continued portraying Her anger but she was restless to meet God. Sensing the impatient mood Her sevaks carry her palanquin in a procession to the Gajapati Maharaja’s palace where the Nandighosa is stalled. She is welcomed by the Gajapati Maharaj and then he offers ‘Dahipati Manohi’ to the Goddess. Following this, Gajapati Maharaj carries the gold idol of Subarna Lakshmi on his head and takes Her for a meeting with Shri Jagannath. The Divine couple shares a look, Shri Hari’s ‘Agyan Mala’ – consent garland is given to Goddess Lakshmi. On receiving the Agyan Mala , Goddess Lakshmi takes a circle around the Nandighosa chariot and parts way towards the Srimandira. Thus, it concludes the Divine meeting of Goddess Lakshmi and Shri Hari on the Nandighosa, popularly known as the Lakshmi Narayana Bheta. 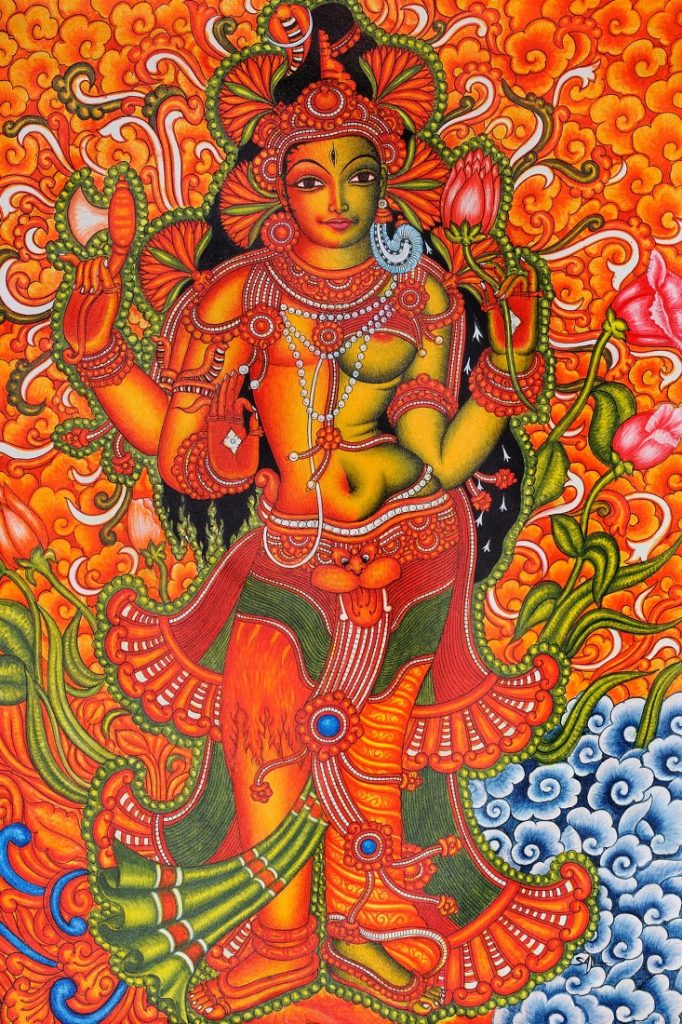 Thereafter the pulling of the Nandighosha Ratha is again resumed. The movement of the Ratha from the Raja’s palace concludes at the main door of the Srimandira – Singhadwara where He joins His siblings who have already reached ahead of His arrival. Shri Jagannath finally reaches His destination and Devi Lakshmi is at ease upon His safe arrival.

All the three Deities remain on their respective Ratha’s for public viewing.

The above lines mean, as because Lord Jagannath washes away all sins of His devotees and extends undivided peace and pleasure, He is thus known as Paramabramha.

The rituals continue in public presence on the chariots, until the entry of the Deities into the Srimandira on Asadha Shukla Trayodashi.

The various ceremonies attached to the Ratha Yatra communicate comprehensively regarding the sensitive conflict of the tangible and spiritual. On the surface, the celebration seems to be absolute, with Lord Jagannath navigating through the congregation of devotees to and fro, but in the spiritual context, the entire Ratha Yatra aims in the cultivation of realizing the Parambrahma- The Complete Divine.

Note: This year the annual Jagannath Ratha Yatra was held on 23rd June 2020. Bahuda Yatra falls on 1st July 2020. Due to the COVID-19 pandemic, the rituals will be conducted, as per the orders of the Honourable Supreme Court of India. All the rituals associated with Bahuda Yatra will be conducted only in the Moola Peeta of Shri Jagannath at Puri Dham without the participation of devotees.