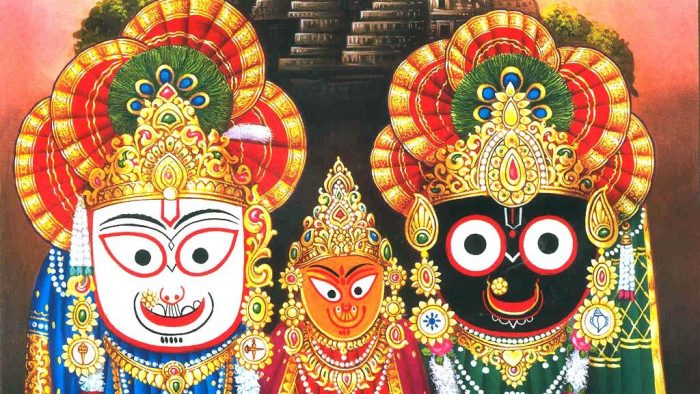 The Jagannath is an abstract Divine, perceived as a definite human-like God. He is mystical but true to experience; He is the consciousness capable of bringing in spiritual tranquility and bliss. He is the Living God who is now on His holiday at the garden retreat – The Shri Gundicha Temple.

The travel of the Triad –Jagannath, Balabhadra and Subhadra to the Shri Gundicha Temple was undertaken on the 23rd of June 2020, following the strict guidelines of the Honourable Supreme Court of India, in view of the ongoing Covid-19 Pandemic. The Rath Yatra was allowed to proceed without the general congregation of devotees and the same has adhered. It was a historic travel of the Gods. As this year for the first time; there were neither devotees to pull the chariots nor to witness them undertake the annual sojourn. His Sevayats pulled Him to the Gundicha Palace. 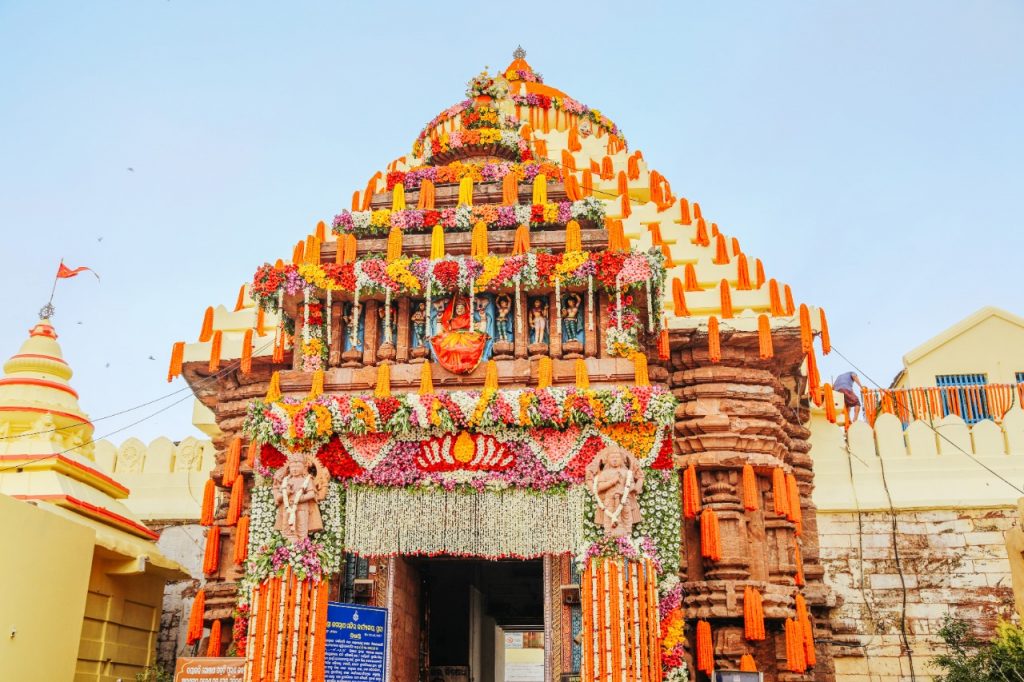 The Shri Gundicha Temple is believed to be the birthplace of Shri Jagannath and His siblings. As per legend – The Divine timber ‘Daru’ that was recovered from the sea by King Indradyumna and the tribal King Biswabasu. The Daru was thereafter carried to the Gundicha temple and here Vishwakarma, disguised as an old frail carpenter, agreed to shape the idols of the Triad behind closed doors on the Maha Bedi. While the idols were being made, queen Gundicha kept an ear on the proceedings behind the closed doors, where the old carpenter worked. One day queen Gundicha could not hear any activity. She got worried and fearing that the old carpenter would have fallen sick, she got the doors opened. Once the doors were opened the old carpenter vanished, leaving the idols incomplete.  The Gods were born and dedicated to mankind as incomplete idols of Shri Balabhadra, Shri Jagannath, and Devi Subhadra. The Gundicha temple is the ‘Maha Bedi’ or the ‘Janma Bedi’ that saw the creation of the abstract Lord of the Universe.

Legend also has it that King Indradyumna conducted an Aswa medha Yagyan here and sacrificed 1,000 horses at this place giving it the name of ‘Yajna Bedi’.

Every year Shri Jagannath visits the  Gundicha temple, His birthplace also as an honor to the sincere dedication and faith of Gundicha, the queen of Raja Indradyumna. Thus the Ratha Yatra of Shri Jagannath is also called the Shri Gundicha Yatra. Once a year during the nine days, Gundicha temple sees activity as the Triad visit and stay in their holiday retreat. A day before the Shri Gundicha Yatra, the Gundicha vatika Mandira, the garden retreat of the Gods is cleaned by the process of Marjana and made ready for welcoming the Trinity and giving them a comfortable stay.

Upon Arrival at the Gundicha Temple

The travel from The Srimandira to Shri Gundicha that is approximately at a distance of 3 Km takes a long time. The delay is not because of the distance but because the Lord of the Universe mingles with His devotees, accepts their offerings, listens to their grievances and in the process of so many interruptions, this delay is inevitable.

On the Ratha Yatra day, the Deities remain on the chariots that are parked in front of the Shri Gundicha temple. All the rituals are done on the respective chariots of the Triad. It is believed that the darshan on the Ratha frees the devotee from the cycle of life and death.

On the Ratha, He will appear in Bamana Vesha. He who sees Him in the above three forms will attain Moksha and will be free from the cycle of life and death.

Upon arrival at the portico of the Shri Gundicha temple, the Triad is given the Mahasnana, the ceremonial bath by the Pujapanda sevayats. Post the Mahasnana, the Deities are dressed in the special cotton Boirani vastra having an intricately wide border. Thereafter follows the ritual of offering Bhoga. The Prasad offered on the chariots are fruits, juices, and dry snack offerings. Wholesome meals are not offered on the chariots. The Gods are welcomed conducting sixteen upacharas by the Pujapandas and are smeared with sandal paste. The Gods are readied in the Bada Singhara Vesha, the last ritual of the day, and after the Bada Singhara Darshan, the Palia Pasupalaka offers bedtime aarti and covers their Srimukha – the faces with traditional silken Khandua pata cloth. A screen seals the frontal of the chariots; thereafter the Gods are left to spend the night on the chariot. 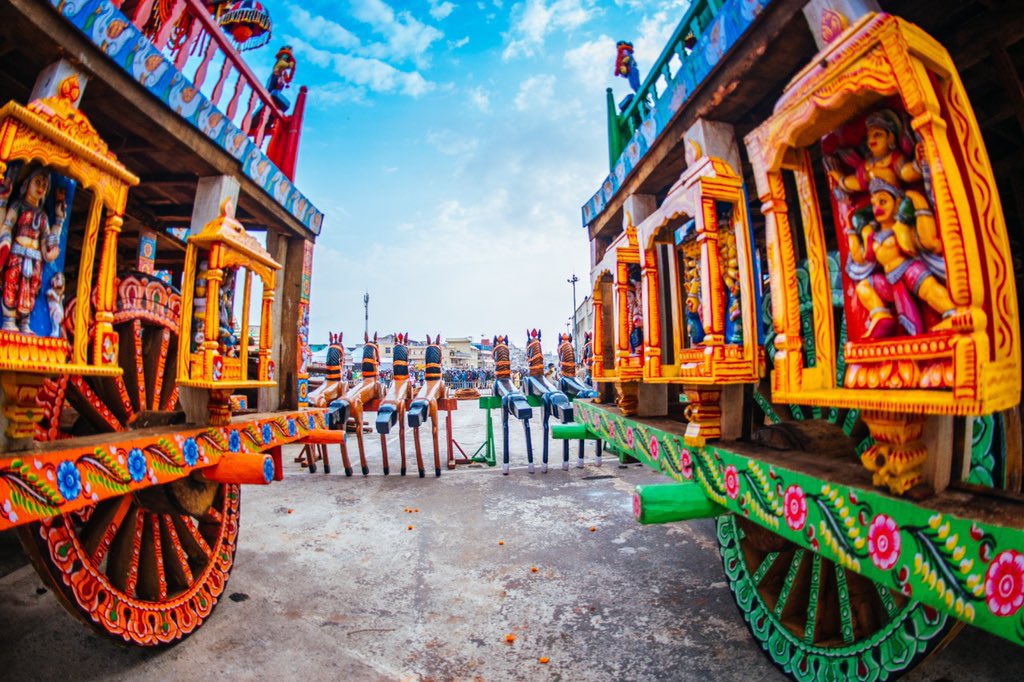 The next morning all the daily rituals of the Deities are conducted on their respective Rathas. In the evening the Gods are made to proceed from the chariots to the Gundicha temple in the Adapa Bije Pahandi . After carrying out the changing of dress, the organic headgear the ‘Tahiya’ is offered. Then follows the unfastening the Deities from their respective seats. They are then brought to the flight of stairs for their descend. First, the idols of Madanamohana and Ramakrishna are taken inside. Then the journey of Triad along with Sudarshana takes place accompanied by the sound of hooting trumpets, jingling bells, and gongs, shrill calls of inches, and the recital of verses from the Gitagovinda.

The next day onwards the daily rituals of the Trinity are done on the Janma Bedi. The Triad is dressed up in the Dasavatara Vesha while at the Mahabedi in the Gundicha temple. The day also marks the beginning of the Anna Bhojana of the Gods. The Mahaprasad also is known as the ‘Yajnya Anna’ is cooked as Prasad from this day onwards inside the Gundicha temple kitchen and served to the Divine Trinity and thereafter to the devotees. The Gundicha temple kitchen is also known to be the beginning point of the Mahaprasad. King Indradyumna had first started the ritual of offering Mahaprasad to the Deities here.

The Seat of the Gods in the Gundicha Temple is also known as the ‘Aadapa Mandapa. It is believed that the audience of the Triad on the Aadapa Mandapa is extremely pious.

The above lines signify that those who are fortunate to see the Deities of the Srimandira in the Gundicha Temple, the final destination of the procession of the chariots, gain the benefits of a thousand horse sacrifices, an immensely consecrated deed. 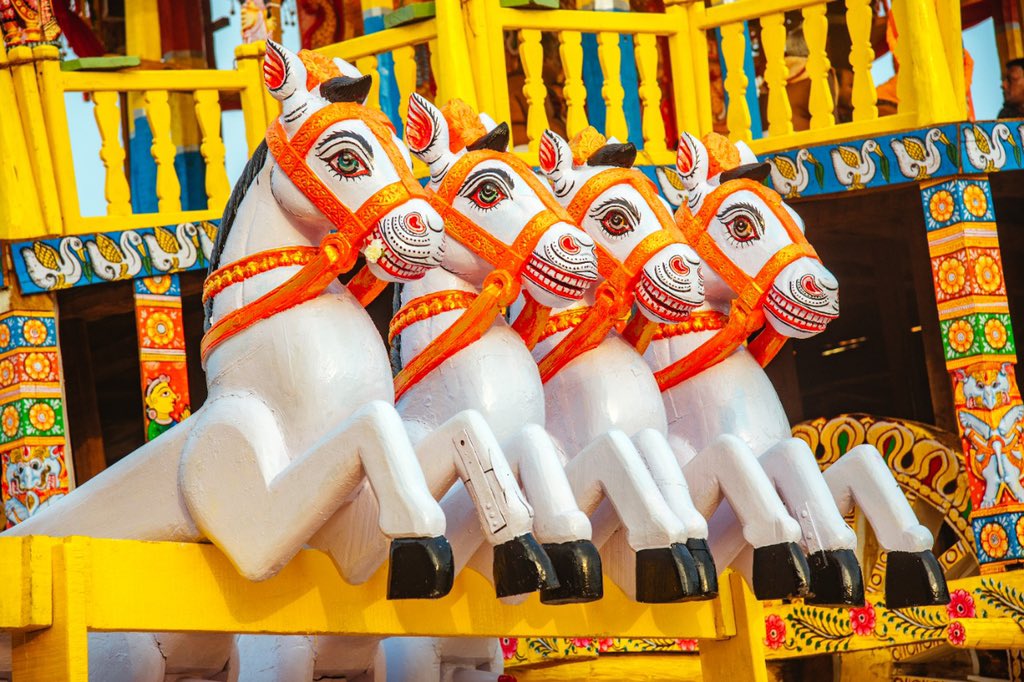 Rath Yatra embodies the descent of pure and pious care from the Divine on to the creations that exist in the material realm. Sri Jagannath beholds the cosmos in his large eyes with the Sun and the moon merged within each other. His shapeless form is the ‘Pranava’, the essence of all Vedic thoughts. He is expressed through his incomplete body yet He is the absolute inclusive infinite.